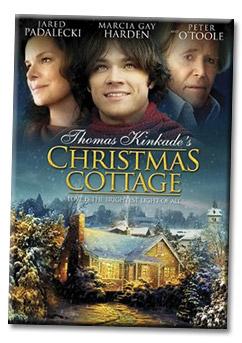 Apparently Thomas Kinkade, Painter of Light(TM), did not just lend his name to the movie coming out this week, Thomas Kinkade's Christmas Cottage. He also issued a memo on how to make a movie Kinkade-style, which Vanity Fair has now gotten hold of.

These are my favorite of his 16 helpful tips to the director, writers, and cinematographers:

6) Hidden details whenever possible, References to my children (from youngest to oldest as follows): Evie, Winsor, Chandler and Merritt. References to my anniversary date, the number 52, the number 82, and the number 5282 (for fun, notice how many times this appears in my major published works). Hidden N's throughout — preferably thirty N's, commemorating one N for each year since the events happened.

15) Nostalgia. My paintings routinely blend timeframes. This is not only okay, but tends to create a more timeless look. Vintage cars (30's, 40's, 50's, 60's etc) can be featured along with 70's era cars. Older buildings are favorable. Avoid anything that looks contemporary — shopping centers, contemporary storefronts, etc. Also, I prefer to avoid anything that is shiny. Our vintage vehicles, though often times are cherished by their owners and kept spic-n-span should be "dirtied up" a bit for the shoot. Placerville was and is a somewhat shabby place, and most vehicles, people, etc bear traces of dust, sawdust, and the remnants of country living. There are many dirt roads, muddy lanes, etc., and in general the place has a tumbled down, well-worn look.

16) Most important concept of all — THE CONCEPT OF LOVE. Perhaps we could make large posters that simply say "Love this movie" and post them about. I pour a lot of love into each painting, and sense that our crew has a genuine affection for this project. This starts with Michael Campus as a Director who feels great love towards this project, and should filter down through the ranks. Remember: "Every scene is the best scene."

Comments 61
Tags: Film/TV Visual Art Blogs
The Stranger depends on your continuing support to provide articles like this one. In return, we pledge our ongoing commitment to truthful, progressive journalism and serving our community. So if you’re able, please consider a small recurring contribution. Thank you—you are appreciated!
CONTRIBUTE NOW