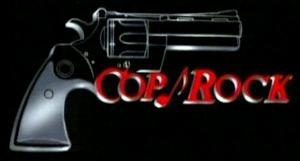 In the fall of 1990, there seemed to be a hunger for a different type of television show, as the success of The Simpsons, America's Funniest Home Videos and the cult hit Twin Peaks seemed to indicate. There was no question that Cop Rock was a different breed of show. But at $1.8 million an episode (the most expensive television series up to that time), ABC needed it to become a quick and solid success. It wasn't. With a guaranteed 13-week commitment, ABC urged Bochco to drop the musical numbers and turn the show into a conventional police drama. Bochco refused. Cop Rock was history, with the final episode airing just before Christmas 1990.

In 2002, TV Guide ranked Cop Rock #8 on its list of the worst TV series of all-time. In 2006, I got to see several Cop Rock episodes at NYC's Museum of Television and Radio. Now, thanks to the miracle of YouTube and the helpful guidance of Metalfilter, anyone with a computer can see a whole bunch of Cop Rock whenever they want.

Here's one of my favorite numbers, the catchiest song about black-market babies you'll ever hear:

Comments 21
Tags: Film/TV Blogs ??!! TV
The Stranger depends on your continuing support to provide articles like this one. In return, we pledge our ongoing commitment to truthful, progressive journalism and serving our community. So if you’re able, please consider a small recurring contribution. Thank you—you are appreciated!
CONTRIBUTE NOW