Troubling On Many Levels

We've been getting a lot of e-mails around here for the newest 9/11 Truther obsession, an internet movie called The Obama Deception, which is one of those half-baked documentaries like Zeitgeist that Truthers are copying and distributing so that people will learn the truth. It's all about how Obama's secretly a marionette controlled by a cabal of Wall Street/Banking types. It goes into that bullshit North American Union thing that Truthers believe was the real reason behind 9/11 and the movie appears to turn into one of those New World Order things by the end.

Today, for some reason, I actually went to the movie's website for the first time today, and I found myself face-to-face with the illustration that somebody spent a whole lot of time making for The Obama Deception, or, as they put it, one of their major volleys in the "Infowar." Ready? 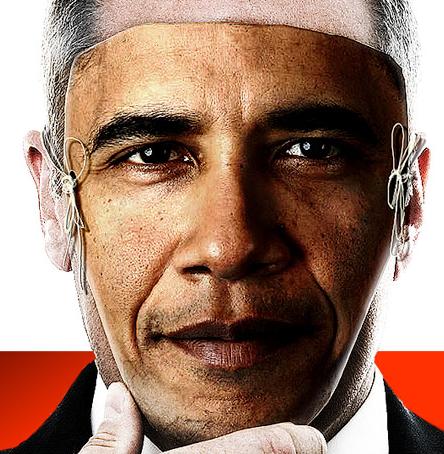 There is so much wrong with that picture that I don't know where to begin, except to say that someone's been watching too many Saw movies. It's disturbing in ways that I don't think they intended it to be disturbing, and they're not going to win the "infowar" by being creepy. Start over, boys.

Comments 42
Tags: Film/TV Blogs
The Stranger depends on your continuing support to provide articles like this one. In return, we pledge our ongoing commitment to truthful, progressive journalism and serving our community. So if you’re able, please consider a small recurring contribution. Thank you—you are appreciated!
CONTRIBUTE NOW