The Ideology of Meat

The loudest criticism against The Book of Eli has been directed at the whole Bible thing. For example, one commenter, BrawndoMan, writes:

So let me get this straight... in the post Apocalyptic era, there is only a single Bible. That is, only a single copy of what is probably the most published book in existence, an inert stack of paper, glue and ink which requires no power source or moving parts to exist as a written text. But there are iPods?

I can live with the film's Bible-worship because in the end it does have the virtue of connecting the roots of Christianity with the ancient Greek cult/philosophy of Epicureanism—to explain this connection would get me into a lot of "spoiler" trouble.


My problem with the film? Its idea of meat. This is from my review of Eli:

The book of Eli opens with a man hunting a hairless, thin cat. The cat is killed by an arrow that's almost as big as it is. The cat is cooked on a fire and eaten with no enjoyment by Eli, a man on a mission.

According to the film, the humans of the post-everything world survive on dirty water and meat from lean animals (cats, humans, birds).

Vegetables are not in the picture. But any nutritionist who is worth a dime would know that this kind of diet could not sustain human life for long. Why? The answer:

Proteins contain nitrogen and other elements. When proteins are used to provide energy, these must be got rid of in some way. This is not only wasteful, it can put a strain on the body, particularly on the liver and kidneys.

Excess intake of nitrogen leads in a short space of time to hyperammonaemia, which is a build up of ammonia in the bloodstream. This is toxic to the brain. Many human cultures survive on a purely animal product diet, but only if it is high in fat.[xii] [xiii] A lean meat diet, on the other hand cannot be tolerated; it leads to nausea in as little as three days, symptoms of starvation and ketosis in a week to ten days, severe debilitation in twelve days and possibly death in just a few weeks. The fact that a film can so easily imagine a world that has nothing left to eat but lean meat shows how much our current and excessive consumption of animals is more ideological than practical. The ideology has completely absorbed reality and almost erased the real history or root of meat consumption, which has less to do with nutrition and more to do with peacocks. 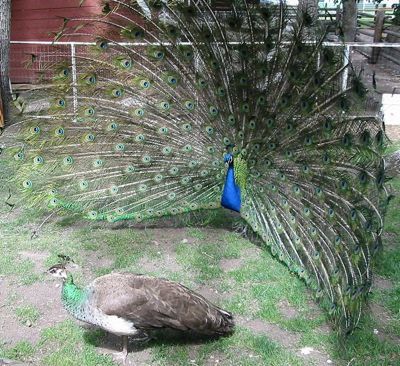 This excellent academic paper, "Hunting and Nuclear Families," which concerns the actual value of meat in certain hunter-gatherer economies, convincingly argues that protein from animals played a small role in the evolution of humans. The hunting of big animals had more to do with prestige than providing groups with an adequate or steady source of energy. True, the article is a little old, but much of the information it contains has hardly deteriorated:
Comments 24
Tags: Film/TV Blogs