From the Mail Online:

A race row has broken out in France after white Hollywood star Gerard Depardieu darkened his skin and wore a black wig to play mixed race author Alexandre Dumas.

Depardieu, who is well known to British audiences for his award-winning performances in Cyrano de Bergerac and Green Card, is naturally blonde and blue-eyed.

He looks nothing like Dumas, who wrote The Three Musketeers and The Count of Monte Cristo in the 19th Century.

...Yet the producers of 'L'Autre Dumas' (The Other Dumas), which opened in Paris last week, seem to think a big-name white actor would attract more viewers than a black actor.

Patrick Lozes, President of the Council of Black Associations of France, branded the move 'extremely shocking and insulting', saying that Dumas's African heritage was deliberately being ignored for commercial reasons.

Although he was born in Paris, Dumas was the grandson of a Haitian slave and often referred to himself as a Caribbean 'negro' because of his distinctive African features.
This is Alexander Dumas:

This is Depardieu playing Dumas 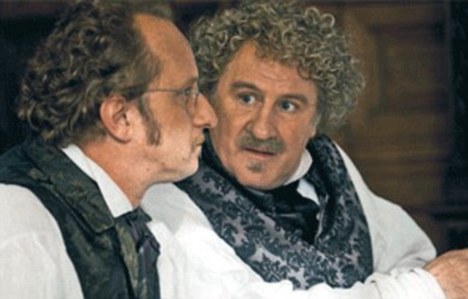 I understand why some people are upset, but it's not exactly blackface. If, however, Depardieu played this historical figure, then we would have a serious problem.
Comments 33
Tags: Film/TV Blogs