Though He Keeps His Shirt On in San Andreas, Dwayne Johnson Is Still The Rock to Me 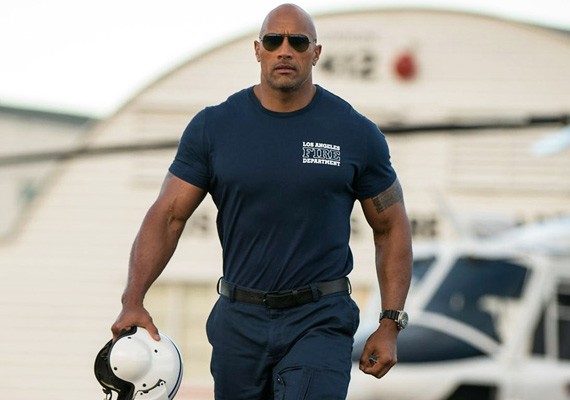 San Andreas is an amazing movie. Shut up. I'm serious. It's fucking amazing. Before you try to argue with me, let me say two words: The Rock. Dwayne Johnson, aka "The Rock," aka "Bronzed God of Dimples and the People's Eyebrow," is San Andreas. This could be the end of my review, as I've said everything that needs to be said about this film. But I'm paid by the word.

When you tell friends that you are going to see San Andreas, they will likely try to talk you out of it. Do not let them deter you—you need to smell what The Rock is cooking. Go see the film that wins all the awards for the most The Rock in a motion picture. Go one-on-one with the great one, as The Rock himself would say. I feel so passionately about this that I've compiled a list of responses to the most likely criticisms of this fine piece of American cinema. You're welcome.

All of the dialogue is cliché and heavy-handed: As it should be. This is a movie about The Rock and things exploding around The Rock and The Rock using his muscles to pry doors off of things (so many doors). This movie is not about words.

You don't care about anyone in this movie: Thank goodness for that! There are 500 earthquakes rocking California in like three hours. Millions of people have died. If you care about any of them, this becomes a very depressing film.

Ugh, why do they try to shove romantic story lines in the middle of disaster films? You're just jealous that it's not you that The Rock is rescuing from burning buildings, collapsing buildings, tsunamis, helicopter crashes, plane crashes, gunshots, and floods.

Nothing that happens in this film is scientifically possible: At what point did the child inside you die?

There are so many special effects it makes me dizzy: Oh, I'm sorry—did you pay $10 to watch The Rock sit on a couch for two hours? Just buy yourself a cardboard cutout of The Rock like a normal human and stay home. The rest of us paid $10 to watch The Rock jump off things, jump on things, be more handsome than everybody, lift things, drive fast things, raise eyebrows at people, wear sunglasses, lay the smackdown on all the things, and flex. You can't do that if nothing is blowing up or falling down or crashing. You can't understand how brave and awesome The Rock is if you can't see how easily the rest of us mere mortals are constantly crushed by falling skyscrapers.

Kalinda from The Good Wife is in this movie, and she doesn't do anything badass or sexy: Okay, this is a valid argument. This movie is an inexcusable waste of the ass-kicking talents of Archie Panjabi. They will have to make this up to us with a sequel.

Nobody works through their marital problems while trying to survive nonstop disaster and save their daughter from certain death: Oh really? At what point would you give up on your chance at happiness with The Rock? If you'd let something as simple as the biggest earthquake in history get between you and true love, you obviously don't love him enough and he deserves someone better.

The Rock doesn't take his shirt off once during this film: While on the surface this seems like a legit complaint, we have to remember that we're talking about The Rock here. The Rock has to wear a shirt in this film because it adds authenticity to his fatherhood story line. But mere clothing cannot mask his bronze muscled glory. Every shirt, every jacket is just a hopeless bystander trying to cling desperately to bulging pecs and biceps. You're always aware that his muscles are there. They're just under the surface of that irrelevant fabric—taunting you.

The Rock can't act: As The Rock would say, "Know your role and shut your mouth." The Rock doesn't need to act. Acting is for mortals who do not have the ability to pack more muscle mass into every square inch of tanned body than should be possible while somehow not looking like they're going to snap someone's head off in a 'roid rage. If you are in a movie and you have to do things like have facial expressions or vocal inflection, it's probably because you are not The Rock.