A handmade style of animation that explodes with wit and emotion.

Been nominated in several categories, given that music, art, and performance are also part of his expressive arsenal—though film is where it all comes together.

Is the commodore of:

A small rowboat that serves as both a seafaring vessel and a stage for musicians to play live shows and chat, as seen on Boating with Clyde.


Clyde Petersen makes his animation the old-fashioned way: one frame at a time, from drawings and cutouts. It's shot with a top-mounted camera looking down into a three-dimensional frame, about three feet tall, in which multiple planes of illustration move independently and interactively, each motion carefully calibrated, acted out, and executed by Petersen and an assistant. The work that emerges from this process is meticulous and casual, crude and sophisticated, mathematical and random. Technology has produced tools that could automate some of this physical labor, but shortcuts aren't the goal. The process is the work. You can see it.

Petersen is deep in production on the feature film Torrey Pines, the latest and most ambitious application of his aesthetic. It's also the most personal, telling the autobiographical story of, as he put it, "being kidnapped at age 12 and taken on a cross-country road trip with my schizophrenic mother." For all the bands (Petersen completed two LPs in late spring alone), art installations, live spectacles, and short subjects Petersen is known for, Torrey Pines is the story he has been building to—the primitive visual language finally bent to the perspective of an actual child. 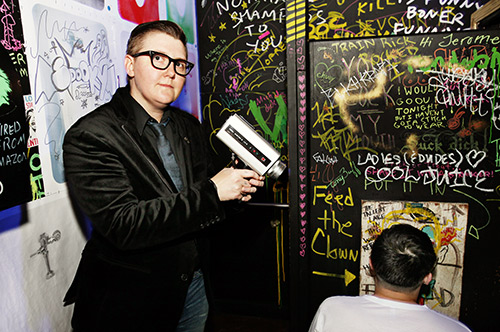 The best analogy for Petersen's aesthetic is the sound and spirit of Northwest punk rock—specifically the pro-queer, pro-feminist, anti-corporate DIY strain exemplified by Olympia labels K and Kill Rock Stars—which has always favored rawness over proficiency. That scene always focused more on music, visual art, performance, and publishing; film played only a tangential role (most notably in Miranda July's late-'90s Big Miss Moviola project). But filmmaking hadn't yet gone through a revolution of access the way those other mediums had; the heyday of Olympia punk was caught between the end of Super 8 and the birth of YouTube.

Petersen is 34. He came of age in these milieus, playing in bands, putting on shows, always with a camera close by. It's only fitting that he has made videos for bands like the Thermals, Quasi, Kimya Dawson, and Thao and the Get Down Stay Down, not simply because his visual wit makes a brilliant companion to the songs, but because his filmmaking (like their music) represents the full flower of a political and aesthetic tradition that prevails against increasingly hostile conditions. It's genius.