An independent film producer whose credits include The One I Love, Lamb, Uncle Kent 2, and Your Sister's Sister.

To be in charge of indie film content for Duplass Brothers Productions, which just signed a four-picture deal with Netflix.

A very impressive high kick—to the shoulder—in a karaoke context.


Mel Eslyn came to Seattle eight years ago, having been trained by film school to believe the writer-director trajectory was the righteous path, and discovered that what the local film community really needed was someone willing to do everything else. And so, Eslyn threw herself into the unglamorous but essential work of doing the million tasks that need doing on a film set and in postproduction.

This made her valuable.

Her talent for anticipating what might be required and doing it before being asked made her indispensable.

Her indefatigability is the stuff of legend. According to her colleagues, she was famously first to arrive and last to leave any set, the one person who could always be relied on to deliver in any situation—despite routinely getting between zero and three hours of sleep per night. Her ability to do a high kick in a karaoke context may not sound germane to filmmaking until you consider the essential value of crew morale three weeks into a low-budget production.

But the key title, it turns out, is producer.

Eslyn's breakthrough under that heading came with last year's creepy, unclassifiable The One I Love, starring Mark Duplass and Elisabeth Moss. It was the first feature Eslyn shepherded from inception to release. It was also a critical and commercial success. 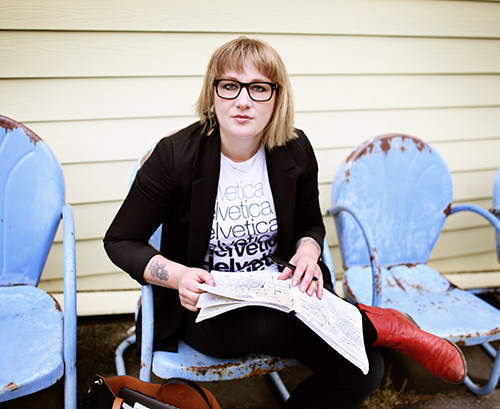 She currently has a dozen films in active stages of development, production, postproduction, or release—some with name talent, some with Seattle colleagues. Some commercial, some bizarro world. Her tastes are catholic. She's a filmmaker.

Then there is her work as head of indie films for Duplass Brothers Productions, whose four-picture deal with Netflix promises to keep Eslyn as busy as she ever was pulling all-nighters on the crew.

She can laugh about those overworked days now. Sort of.

"How did I live? How did I survive? I didn't sleep for years," she says on one of her increasingly rare days in Seattle. She looks reasonably well rested. She probably won't for long.