The place Quentin Tarantino walked to from his downtown hotel, calling it a pilgrimage.


In October 2014, a big change happened at Scarecrow Video, a movie emporium that's been around since 1988 and is now run by its employees. Facing declining sales and a rapidly changing market, the world-famous rental store in the University District, first owned by Rebecca and George Latsios, became, as of 2014, a nonprofit with the blessing of its owners Carl Tostevin and Mickey McDonough.

The transformation was important for several reasons, the main of which is that it kept a first-rate institution alive. Scarecrow has an astounding 120,000 titles—many of which are not available online. And the importance of Scarecrow being alive isn't just existential, it also preserves the virtues of this form of physical distribution. Right now we are rushing headlong into cyberspace without a real sense of what we are actually losing. As independent video store after video store dies in city after city, we are completely focused on the convenience of near-instantaneous access. 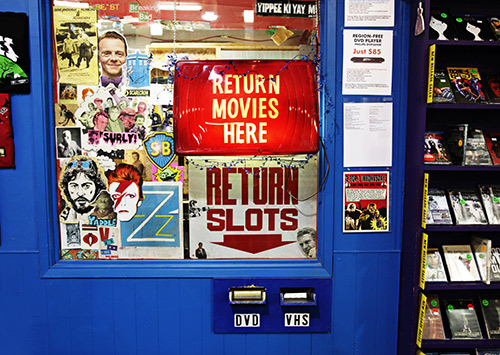 What is the major difference between a rental store and a website? Physical browsing. And with a video store as packed as Scarecrow, browsing becomes an art itself. The culture critic Walter Benjamin once wrote that getting lost in the city "requires schooling." Similarly, getting lost in all of the titles in Scarecrow requires "a skill," as marketing director Matt Lynch of the new nonprofit put it during a conversation I had with employees at the store's screening room. "We have, sadly, forgotten this skill, forgotten how to browse for things."

"These days, there is an algorithm that says: 'Here is what we think you are going to like... Here is something that's like what you ordered before,'" explained Kate Barr, the business director. "What is lost in all of this is the journey of discovery. You are only buying things you already like. You are actually becoming more narrow." Later, Joel Fisher, the operations director, added: "You have less of a chance of leaving your comfort zone on a website, and most great experiences and art come from leaving your comfort zone."

What's ultimately provided in Scarecrow's stuffed spaces, loaded shelves, and dense levels is the chance of not so much self-reinforcement as self-expansion. And browsing is not just about discovery but also rediscovery. Sometimes, something we once loved but somehow have forgotten can be retrieved only by a chance reencounter. With Scarecrow, we can walk inside our heads. The place stores our memories as physical objects. Losing this kind of real-world access and storage would have been like having a section of our city's brain blown to bits by a wrecking ball.

"We are doing well at the moment," said Barr, "but we are worried that some people will think that now that everything seems to be okay and stable, they do not have to visit us so much. This is dangerous thinking. We still need you in this store. We need your support."