A Sad Waste of Talent 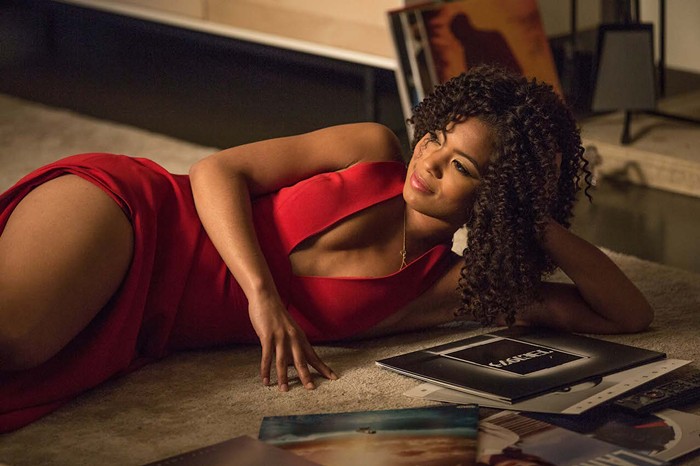 When the Bough Breaks, the second-highest-grossing film last weekend, is the story of John and Laura Taylor (portrayed by Morris Chestnut and Regina Hall), a rich and beautiful couple desperate for a baby. After many failed attempts at conception, they decide to put all their hopes, and their “last viable embryo,” in the uterus of Anna (Jaz Sinclair), a young surrogate with the vacant stare that reminds you of the most drug-addled folks of the 1970s cult films. The film opens with Laura staring at a video of Anna discussing with the surrogate screener why she wants to be a surrogate. Anna looks sedated and dim, her eyes in a crooked squint and her mouth in a vague smile. She looks like a stoned deer. This is the face Anna makes during the entire movie. It’s her innocent face, her scheming face, her scary face, her sexy face. I did a Google Image search of “stoned deer” to ensure the accuracy of my description, and—trust me—it’s spot-on. “Look at her eyes,” Laura says when she’s explaining to the surrogacy service why she wants to choose Anna, as if there’s anything to be found in those eyes other than quaaludes.

The Taylors invite Anna and her fiancé, Mike (whom I’ll call CreepyMurderFace, because apparently that’s his go-to look), over to dinner. Anna sits there looking like a stoned deer while Mike creeps everyone out with his murder face, and the Taylors think: “Yes, these are the people who should have our baby for us.” Unbeknownst to John and Laura, the complete stranger they have just met and decided to trust their only embryo to is not the vacant, squinty, emotionless innocent she seems. She’s instead a vacant, squinty, emotionless murderer who is planning with her boyfriend CreepyMurderFace to use the surrogacy to scam the Taylors for money—before she abandons the scam after falling madly in love with John and decides to replace Laura as the mom in their soon-to-be family. Danger, seduction, and intrigue are… mildly suggested… as Anna weaves a very meandering web that she hopes to ensnare John and Laura in.

This movie is bad. It’s not bad in a funny way, or bad in a campy way, or bad in an educational way. It’s just bad. Bad from the very first scene until the very last—a boring, wasteful bad that has you wishing you had stayed home to stare at the wall instead.

I’m sad that—even though this film is very, very bad—people will still see it. I’m sad that studios know that they can throw a shitty script and some shitty production and a shitty soundtrack together and they can count on making a profit because this is how desperate we are to see black people in film. I’m sad that the talents of Morris Chestnut and Regina Hall are wasted on such an unoriginal mash-up of every “crazy sexy stalker” movie that’s ever been made. I’m sad that Sony has been able to build a franchise with Screen Gems that consistently provides lukewarm, formulaic entertainment to black audiences desperate to see black faces on their screen (see Obsessed, No Good Deed, and The Perfect Guy), while talented black filmmakers languish unseen and unpaid. But mostly I’m just bored. I want more, and I’d be willing to spend money on more. I don’t think I’m alone.

When the Bough Breaks

Box-Office Hit War Room Made Me Shake with Rage

Pushing Christianity Instead of Crack

Dope Is a Movie for All, but Particularly for Black People Left Out (or Demonized) in Tyler Perry Films