And Then We Danced Is a Gay Romance with High Stakes 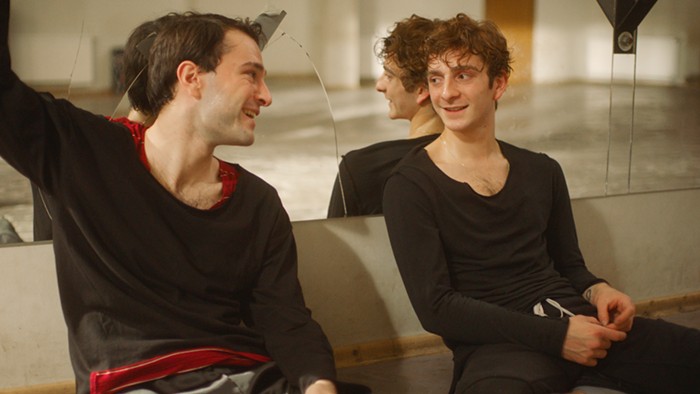 Irakli (Bachi Valishvili) and Merab (Levan Gelbakhiani) are amorous rivals in ‘And Then We Danced.’ Photo by Lisabi Fridell, courtesy of Music Box Films.
Tweet

Robyn's single "Honey" off her 2018 album of the same name comes on about halfway through the Swedish Georgian film And Then We Danced. And it's perfect. Merab (played by the luminous first-time actor Levan Gelbakhiani) is playfully dancing for the private pleasure of his rival and crush, Irakli (Bachi Valishvili), when the song comes on through the tinny speakers. "No, you're not going to get what you need / But, baby, I have what you want," Robyn sings as his lithe body moves to the soft, sensual pop track. He smokes a cigarette and bounces around the room, communicating a desire for Irakli that he can't express in words.

The scene has real stakes, too, as sentiment toward queer people in Georgia (where it's set) is still quite hostile. Merab and Irakli are engaging in this flirtation while Merab's temperamental brother is passed out drunk in the room; if anyone came in and saw them, it could mean excommunication from their community. Or, even worse, violence. Director Levan Akin (who is Georgian but grew up in Sweden) was inspired to make the film after witnessing a violent clash between LGBT demonstrators and far-right protesters in Tbilisi, the capital, in 2013. Akin, who is gay, felt ashamed of his country and resolved to make a queer coming-of-age film that takes place there.

And Then We Danced is situated in the world of Georgian dance. Merab comes from a lineage of (failed) traditional dancers, training for years with his partner Mary (Ana Javakishvili) in hopes of graduating to the main ensemble. The men in traditional Georgian dance are supposed to project a type of stiff masculinity in their movements, and the surly dance coach criticizes Merab for his softness. Tension in the troupe escalates when the aforementioned Irakli, hot and charming, joins the group just as a spot for a man in the main ensemble opens up, pitting Merab and Irakli against each other.

Akin has said that filming in the country was difficult, since few people wanted to be associated with a production that celebrates a gay narrative. The film's dance choreographer was even listed as "anonymous" in the credits for fear of losing his job. When the film premiered in Tbilisi and nearby Batumi last year, far-right protesters and members of the Georgian Orthodox Church came in droves to harass moviegoers and prevent them from attending the screening.

Despite this homophobic animosity, Akin has said that the number of young Georgians, Ukrainians, and Polish people reaching out to him with excitement about And Then We Danced without even having seen it is extremely heartening. The film's setting within an institution of Georgian culture places a queer love story right at the heart of tradition. Being gay and Georgian isn't a conflict of identity; rather, these identities can and do coexist and are bolstered by each other.

It's a tenderly told story that doesn't skimp on explicit sex scenes, centering physical desire as much as emotional connection. Gelbakhiani is the linchpin who makes the film really work, occupying the screen wonderfully as Merab, communicating the lust, frustration, anger, and determination necessary for the role.

But, God, I keep coming back to the "Honey" scene; I think it's the key to the whole movie. The song's brazen, sticky sexuality perfectly enunciates the undercurrent of want that pulses between Merab and Irakli, a sonic story cut straight from the club dance floor and plopped into the center of Georgian tradition. "Come get your honey," Robyn coos. Like she knew!

And Then We Danced