The Longing Looks in Portrait of a Lady on Fire 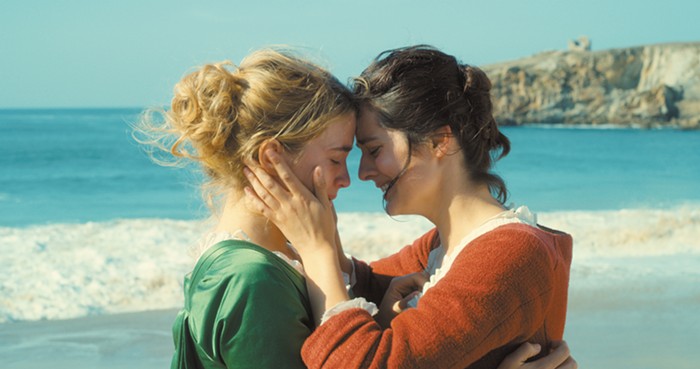 From director Céline Sciamma (Girlhood), Portrait of a Lady on Fire is set in late-18th-century France on a remote island in Brittany. Young and independent artist Marianne (Noémie Merlant) is commissioned to paint a portrait of Héloïse (Adèle Haenel) that will be sent to Héloïse's Milanese fiancé.

There's just one thing: Héloïse refuses to sit for her portrait, as she does not want to get married to some strange man. So, under the guidance of Héloïse's mother, Marianne poses as the lady's maid in order to get close to her, secretly completing the portrait from memory.

Sciamma is really obsessed with gaze in this film, understanding the importance it carries for a painter studying her subject and also what it can communicate between two lovers. When Marianne looks at Héloïse on their long walks together, her looking carries more meaning than simply taking in her companion; Marianne is etching Héloïse's face into memory, carrying the image in her head, attempting to recreate it in paint.

It's a finicky thing, trying to capture someone's essence from just a memory that's riddled with your own biases and emotions toward your subject. "Don't regret. Remember," Marianne utters to Héloïse at one point. An apt direction for both painting and dealing with a breakup.

If this sounds like a fanfic, it sort of is. And I mean that in the best way possible. The windswept, craggy background of the film, the propriety of the women's costumes, and the secretive closeness between Héloïse and Marianne are all so saccharine and gay, it's as if it were written by a feverish blogger. But I think that's also what makes the film so wonderful.

Marianne and Héloïse's unfurling of feelings for each other is more than just wish fulfillment; there's an emotional logic to it that believably defies their historical context. And its ending doesn't seem overwrought or cliché, just devastating.

Portrait of a Lady on Fire