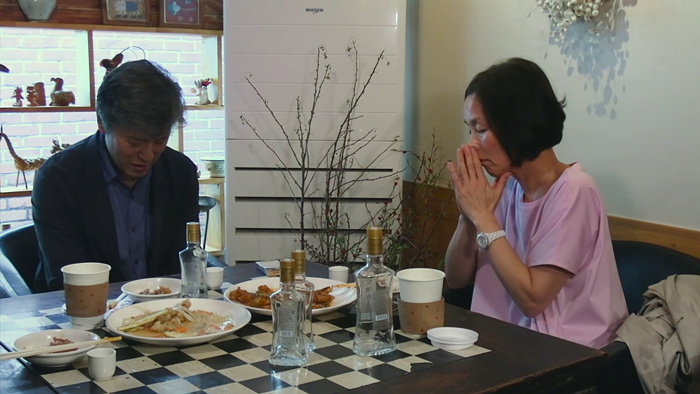 How does he do it? The South Korean director Hong Sang-soo, an art house and film festival celebrity, makes the same movie over and over and over. It’s always about a famous director/novelist/poet with an ego and desires that are not honorable, and a beautiful but vulnerable actress/painter/film student; and they always take place in a bar or café or near a cinema house or gallery or theater. But despite this repetition, which stretches all the way back to the beginning of this century’s first decade, Hong’s films never fail to engage—and sometimes even enchant.

This can be said of In Front of Your Face, one of four films Hong completed during the COVID-19 pandemic. (Yes, we are still in it.) It’s about a famous middle-aged actress, Sang-ok (Lee Hye-young), and a famous middle-aged director, Jae-won (Kwon Hae-hyo). Sang-ok currently lives in the US, and Jae-won is trying to bring her out of retirement to star in a film that sounds very much like the ones Sang-soo makes. It won’t take long: Jae-won is flexible, and all that’s needed is the camera in his car.

The famous actress drops a bomb on the famous director, who turns out to be much like the other directors in Hong’s films, all of whom, in turn, are much like Hong himself: insufferably vain. And yet the movie somehow finds something new and meaningful to say about art and life and the region of twilight between the two.

In Front of Your Face screens at Northwest Film Forum from Jul 8 to Jul 17.