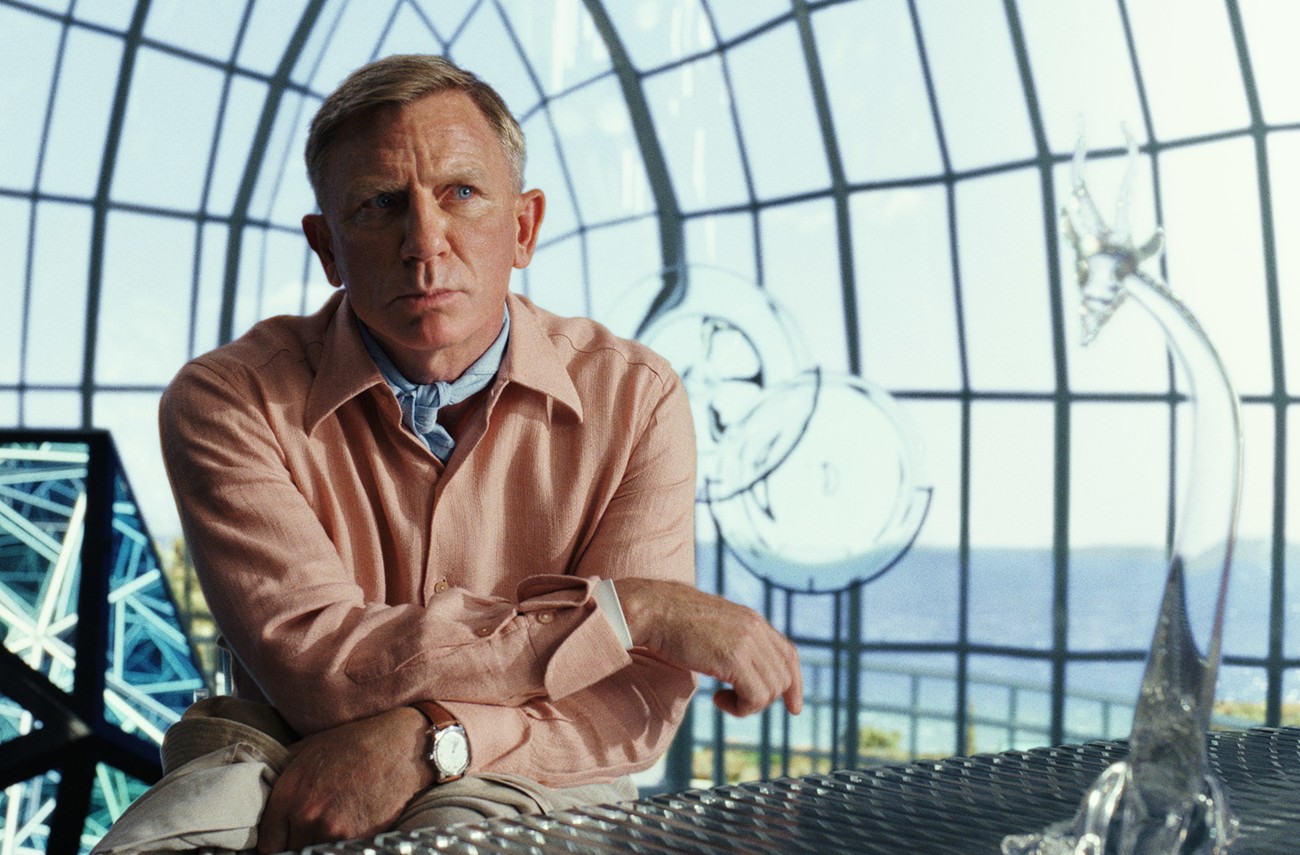 Daniel Craig: Having the best time of his life. Courtesy of Netflix

“One of the top five most satisfying movies I’ve ever seen,” I said out loud as the credits rolled at a screening of Glass Onion: A Knives Out Mystery. I was immediately ready to watch it again, but time’s running out: Netflix has opted to only allow it in theaters for a very limited time, and after tonight, it’ll vanish from big screens for a month and re-emerge on Netflix on December 23.

It is, needless to say, an extremely annoying release strategy. Should you really drop your plans and trundle down to a movie theater on a Tuesday night to watch this thing?

If it was any other movie, I’d say no. But we’re going to have to make an exception for this one because it is an experience best seen with a crowd of people so that you can appreciate not just the beautiful composition on the big screen, but the sound of gasps, belly laughs, and astonished sputtering from your fellow theater-goers.

I will endeavor to reveal as few of the twists as possible, which will be difficult as this movie is nothing but twists. There are twists upon twists. Twists that you won’t see until they’ve already been twisted twice. Hours later, you will sit up in bed and say, “Oh, of course, THAT’S why he…”

The premise is that a group of rich influential kooks have all been invited to a remote island, where their richer-than-rich friend has arranged for a playful murder-mystery game.

Glass Onion is reverently indebted to classic mystery films that established the genre in decades past, and many comfortable tropes are here: The servants have all been sent home. The mansion is a maze. Everyone has a reason to hate everyone else. The host has essentially limitless money, which means that even the most implausible schemes are within the realm of possibility. Woven into the experience is a bit of Clue, And Then There Were None, The Last of Sheila, A Murder Is Announced, and North by Northwest, and two bits of Murder She Wrote.

And then we put all of those influences into cold storage and jump into a tiger cage.

Just when it seems that we’re heading into an affectionate tribute to the genre, all of the rules are broken, re-assembled, and then broken again and again. And again. As with the first Knives Out film, it is impossible at any point to say where we are in a traditional whodunnit act structure as the film subverts one convention after another. Not for subversion’s sake, but for the satisfaction of creating a puzzle that seems impossible from every angle until you discover the one angle from which it all falls into place.

I’m sorry to be so vague, but I don’t want to rob you of the incredible pleasure of hollering “No WAY,” at the screen, as happened numerous times at the screening I attended. The best way to see the film is to know nothing about it. The second best is to watch it again and again with groups of first-timer friends, glancing at their faces throughout for the repeated moments of shock and delight.

As with many Netflix projects, there are a few occasional moments of sluggish pacing. The first half-hour takes a roundabout path getting to the mystery, and instead lingers on the uneasy interactions of a troubled friend group before the real action seems to get going. It’s pleasurable character work, but I found myself wondering where the promised whodunnit was. Be patient, though, because all that work will pay off… unexpectedly, of course.

There is also a stretch of exposition around the middle that seems to ramble a bit longer than it needs to. We’re accustomed to lengthy explanations from our sleuths at the ends of their capers, and it’s a surprise to find one halfway through the experience. This, too, provides a payoff in the end. It’s probably for the best that we cram all that information into as tight a sequence as possible, but all of the telling at the expense of showing veers dangerously close to feeling like the actors are describing a script instead of acting.

These quibbles are easily forgiven, thanks in no small part to the delicious performances by the entire cast, especially Kathryn Hahn as an anxious politician, Kate Hudson as a frivolous model who only momentarily allows herself to be vulnerable, and Dave Bautista as a growling YouTuber who conceals one of the film’s more complex wounds. And of course, Daniel Craig is having the time of his life.

But by far, the greatest standout is Janelle Monáe, who I believe is one of the most gifted performers in a generation. Here, her character unfolds like a puzzle-box, hinting at secrets upon secrets with the subtlest of expressions. Monáe’s command of her face and voice creates a masterpiece, and the film soars whenever she is on the screen.