Our Favorite Places to Get Jewish and Israeli Food in Seattle 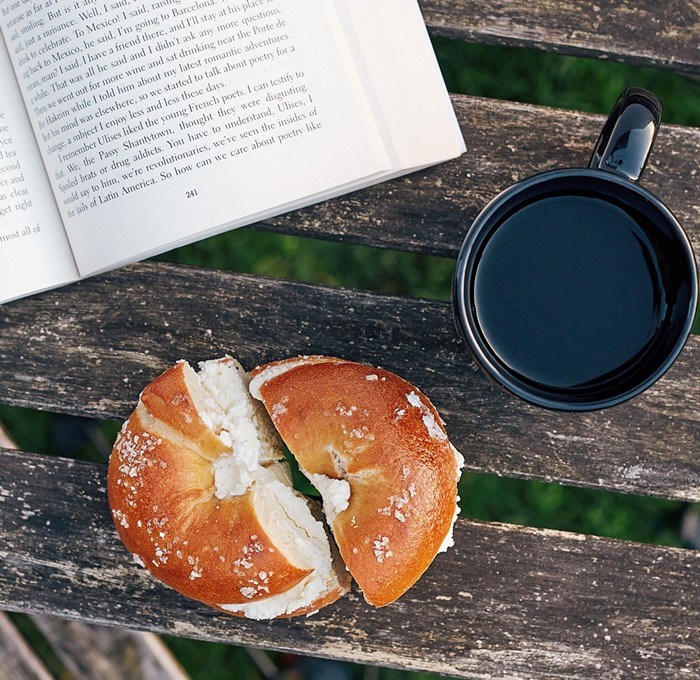 Westman’s Bagel and Coffee. Ephriam Nagler
Back to article

1
I wrote this in 2006 in a Stranger comment (pre-Slog, I believe).
"Looking for good
Jewish-style delicatessen food in the Puget Sound region? There isn't
any. Lots have tried, none have succeeded.

In 1972, Brenner Bros. had already emigrated to Bellevue. I never
visited its prior incarnation in the Central District [because, when I moved here in 1972 they had already engaged in white flight]. The Bellevue
store was okay. It smelled right (that pickled-tomato odor), the
sandwiches were the right size, the corned beef was pretty good, but
their rye was only (and still is only) adequate. [Behind the counter was Yetta Brenner. What a great name. She had excellent hair.]

Some years later, on Occidental Ave. in Pioneer Square, the Yiddish
Connection opened. Soup Daddy is in the place now. It was also just
okay, but it's all we had in town. It lasted a year or so and closed.

A few other places jumped in. Catskills, on the second floor of an
office building across from the Westlake Center, was very good. They
knew how to pile on meat, they knew what a "special" is (corned beef
or pastrami, cole slaw and Russian on the sandwich, rye, of course)
and made a pretty good Reuben. It was cafeteria-style with very funny
staff, although not in the East Coast sense; they just seemed to like
their work. Because it was on the second floor, it got virtually no
walk-in business, disastrous for a lunch place; for a while they hired
a hawker to stand outside on the sidewalk. I guess when the food court
opened at Westlake, it just couldn't make it.

Cohen Brothers opened on Third Avenue at about Columbia Street (it's
now a Chutney's Express or something). This one was the worst. Suffice
it to say that they bragged about their Reuben, which they zapped.
ZAPPED! Mercifully, they closed quickly.

Ajays (maybe AJs), on Madison a block or so west of Broadway, was
sincere, although they had a broader menu than just a deli. The guy
made a very good Reuben. He had a place in Belltown also, but it
wasn't a deli.

Matzoh Mamas on 15th was never very good. It's also a silly name for a
deli. They lasted a long time (evening jazz helped), but now they're
just a memory and a caterer.

A few years ago, on 45th NE in Wallingford a couple of blocks west of
the former Food Giant, a place opened called Mama Knish. Soups and
knishes. Does that make a deli? Weird that anyone thought they could
make a living. A few weeks later, the MAMA was covered up with a big
white board, so it read "_______ KNISH." Did Matzoh Mama threaten to
sue?
I admit I never was a knish fan, so any comment from me is unfair.

Roxy's? Try it yourself. I think it's just fair and the staff, when they were by the Market, was quite ignorant of their own menu. Maybe there are haimish substitutes.

I'm staying out of the bagel debate except to state that in the early
'70s, the only bagels available were Lender's frozen (very very bad)
and something bizarre from Bainbridge Island that rose so much that
there was no real hole; also, they were whole-wheaty which is as
appetizing as a whole-wheat croissant, which just isn't a croissant.

I have discovered the best Jewish-style rye bread in the region, and
it's in Kent at the Wild Wheat, a sandwich place and bakery downtown.
When you order a loaf, it doesn't look right. There are no seeds on
the outside, it looks and feels like a como-type loaf from Grand
Central, but don't be fooled. It is excellent, just the right
consistency inside and out."

Wild Wheat still makes good rye bread but their pastrami has gone way downhill. Too bad, the owner is a Parsippiny, NJ, Jew who should know better. But should anyone from Kent know better? The only Jews are judges and lawyers from the Regional Justice Center.

There was a restaurant just north of Scarecrow Video on Roosevelt not too long ago that looked and smelled just right: pickles and pastrami. It was very good but didn't sell alcohol. That was the end of that.

It's not owned by Jews any more but let's not leave out Market House Corned Beef. It's terrific, and since the Arkush (?) family sold out they now make sandwiches. The meat is outstanding but they use boring packaged rye bread; BYO rye and you'll do great.

Goldberg's in Factoria is pretty good. They claim to be east coast but that's a lie; they're from Detroit where the rye bread lacks seeds. What's with Detroit?
Algernon on March 28, 2018 at 5:30 PM Report this
2
A little cruel to feature bagels, pastrami sandwiches, pita, falafel, babka, etc. during the week Jews can't actually eat them!
womanchego on April 4, 2018 at 1:11 PM Report this
3
Oh to be young, and stupid! As Algernon notes, Seattle has always had a thriving kosher and Jewish food business serving its not insignificant Jewish population, which included the original settlers of Seattle, prior to statehood. In the 1970’s Seattle was filled with excellent fresh bagel bakeries, in the U-Village, Lake City, Capital Hill, the east side and all over. Where they made the bagels right in front of you, and they were good. The carbo hysteria was what killed the bagel, and people who used to go out every Sunday at 8 am for a dozen just disappeared overnight. Seattle imported pastrami from Chicago to Brenner’s and elsewhere for decades. The Chicago pastrami was leaner and better than the greasy NY garbage, and it sold well. Brenners had 3 stores, and the only reason they left the CD, which at the time in 1960s was a Jewish neighborhood, was because of the constant holdups and shootings in the store. Changing tastes are what killed Jewish food in Seattle; as people avoided carbs and fatty meats, those foods just couldn’t make it, and they aren’t going to be coming back in any big way. The future is the Israeli places that feature a healthier, more vegetarian menu that is more suited to West Coast tastes and lifestyles. If you want NY style Jewish food, you know where to find it! There are flights leaving every day.
I am not a Robot on April 4, 2018 at 2:40 PM Report this

Wild Bill on April 4, 2018 at 4:48 PM Report this
5
At first, I did a scan of this story and the highlighted establishments, and I was outraged. How dare they not mention Eltana?! Then I actually read the story and the dis of Eltana, and I was even more outraged. Listen, I can understand how their bagels would not be everyone's thing, but I love 'em, and a lot of other folks do, and even then, to dismiss them just because you don't like their bagels comes off as harsh. Their menu has a strong selection of Israel/Middle Eastern fare. Oh, and their spreads are wonderful—my favorite being the vegan and exquisitely refreshing fava bean basil. And just in terms of Jewish restaurants, the place gives off a whole welcoming, not-overbearing "tikkun olam" vibe of Jewishness.

Now, is the place literally kosher, as in certified by a rabbi? I guess not. Interesting because they don't have any beef items on the menu that would violate the meat+milk prohibition.

Even so, I do have to check out Westman's. And as long as I've digressed into a discussion of bagels, I do have to give a shout-out to my recently rediscovered Bagel Oasis in Ravenna.

And credit to Algernon @1 and Wild Bill @4 for mentioning Goldberg's in Factoria. I know articles like these are always going to have omissions, but hey, that's why you have the comments threads.
cressona on April 4, 2018 at 5:34 PM Report this
6
Just wanted to point out that not all Israeli food is based on what people brought after migrating from other countries. Much of it is also the food consumed there for generations by “Israeli natives” if you will, aka Palestinians, and include present Israeli staples such as hummus, falafel, and vegetable salad.

This is not necessarily a negative phenomenon as it actually lead to common interests and cooperation: Jewish Israelis often dine in traditional Arab-owned hummus places and some joint Israeli-Palestinian food ventures thrives in different parts of the world. It still needs to be acknowledged when discussing the historic perspective.

So, to suggest that Palestinians created these dishes is...well...

What is probably fair to say is that those people that lived there, even before the term 'Palestinian' was created (which was a term of insult to punish those that lived there by I believe a Roman) ate these foods. The only issue being that no matter the religion, the people of the region ate these foods, not just who today are referred to as Palestinian.
I'm Cool on April 6, 2018 at 1:19 PM Report this
8
@7
Mentioning “Palestinians” doesn’t mean there is no “Israel” and vice versa.
And since you went there, When Biblical Jews arrived in what is now Israel there were already people there and they were not Jews. As you may recall the big G, the one who is on our side since we wrote the book, told Joshua to slaughter each and every one of them, babies included.
No hummus recipe mentioned in the bible, and no citrus over there back then.

Arguing who’s real or not, who was invented by Britain or covered by the US, who’s got a bigger trauma therefore a perpetual victim that cannot be held accountable for their actions, are all pointless arguments to disqualify the other that mask the real issue: WE’RE STUCK TOGETHER.

Food and soccer are some of the rare subjects that Israelis and Palestinians can actually agree on. This article is about food and its origin.
Not all Israeli food was brought from other places.
When Jews flocked to what is now known as Israel, Palestine or whatever before, their diet and was adopted/influenced by the crops that people who lived there for generations cultivated and cooked.
Acknowledging this fact does not make one a traitor, but rather a patriot seeking the best for all people.