Though I am openly carnivorous, I have a tendency to experiment with fake meat. Sometimes, as with Gardenburger's fake beef patties, it doesn't work out so well. Other times, as with Soyrizo, it works out just fine. Sometimes, as with the Quorn fake chicken (or, as I like to refer to them, "fricken") patties, they're better than the "real meat" frozen equivalent. Last night, because I knew I would be eating alone and wouldn't be inflicting my whims on anyone else, I decided to make a Tofurky. 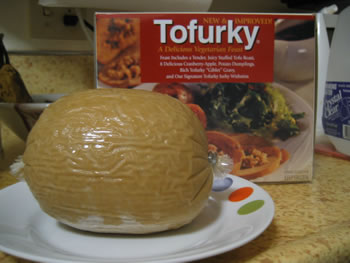 Tofurky is, at least, pretty easy to make. You just cut the thing out of its plastic wrap, surround it with vegetables (I used what I had lying around in the kitchen: carrots, cabbage, onions, and Italian parsley) and then cover it with a mushroom gravy that comes in the box with the Tofurky. Then you roast it for an hour and a half-ish at 350º. 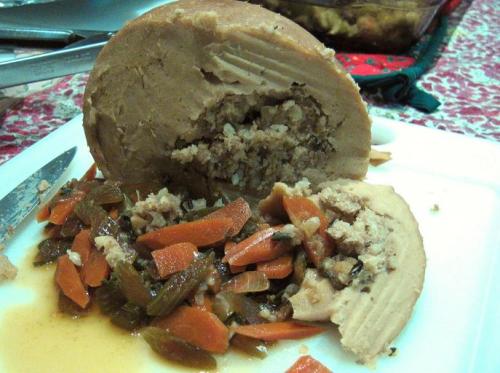 (Also not my photo.)

The bad thing about Tofurky is the Tofurky. It's edible, and I guess it tastes a little like turkey, but it's got a weird gluey aftertaste that's not appealing at all. The consistency was okay—not meat-like at all, but it's more solid than regular old tofu at least—but it's just not that good. I think most makers of vegetarian meat-like products (excepting the pressed mushroom that In the Bowl and Teapot serve for beef and the aforementioned Quorn fricken) would be better trying to invent something new. If they sold the stuffing and gravy separately, I'd be all over them. As it is, I swear I will never eat Tofurky again.

Comments 48
Tags: Food & Drink Blogs
The Stranger depends on your continuing support to provide articles like this one. In return, we pledge our ongoing commitment to truthful, progressive journalism and serving our community. So if you’re able, please consider a small recurring contribution. Thank you—you are appreciated!
CONTRIBUTE NOW