More new Seattle restaurants and bars! A * means we would like to try it NOW.

* LITTLE UNCLE in Capitol Hill: Okay, stay with us now: Little Uncle is a walk-up window of Thai-food deliciousness brought to you by Lark sous-chef Wiley Frank and his wife, Poncharee Kounpungchart, also known as PK, and also a chef. Little Uncle used to happen on Mondays at Licorous, before it closed (and became a bar called Canon); then it happened at La Bête. Little Uncle also used to be called Shophouse, before national burrito chain Chipotle expropriated that name (for their new Asian concept). Extra-confusingly, “Little Uncle” is PK’s father’s nickname. If you go eat Little Uncle’s superlative, inexpensive Thai food, you will not regret it. UPDATE! Now they take credit cards, and they're open Tuesday through Friday from 11 am-7 pm, and you may place your order via their website and they'll have it waiting in the 15-minute time frame of your choosing!

* BELLE CLEMENTINE in Ballard: Belle Clementine is a farm-to-table establishment in Ballard from David Sanford (the Corson Building, Outstanding in the Field). Adorably named after his grandmother, the place has a one-of-a-kind business model, offering prepaid subscriptions to dinners as well as regular reservations (must be his Stanford entrepreneurial management degree). The food is likely to be great; it’s three courses with dessert and a glass of wine for $35, served family-style (bring friends to insulate you from those who use the word “foodie”).

* MANHATTAN DRUGS on Capitol Hill: Manhattan Drugs is the steakhouse-and-bar where Izilla Toys used to be on 12th Avenue, brought to you by Laura Olson, the entrepreneur behind Po Dog, Auto Battery, Grim’s, and Detention. The decor might be described as reclaimed posh—tufted upholstery, patterned wallpaper, exposed wood ceiling, card catalog drawers, and golden-horned taxidermy art—and the opening menu is laden with steakhouse standbys. Economy, schmeconomy—steaks range from $29 to $52, and the budget option here is a $17 Painted Hills hamburger...

* U:DON in the University District: U:Don is a “noodle station” in the U-District where the Pita Pit used to be. Chef/owner Tak Kurachi specializes in house-made Sanuki-style udon noodles made with organic wheat flour imported from Japan; you go along a laboratory-style counter, choosing from various options, which is fun. And the soup’s tasty (and cheap!) enough to make you forget about the emoticon embedded in the name.

* MACLEOD’S SCOTTISH PUB in Ballard: Brought to you by the duo responsible for Bastille and Poquitos, along with Alison and Allen Macleod, Macleod’s is where Harlow’s Saloon once lived (briefly) in Ballard. The establishment is decorated with stuff pillaged from an outing to Scotland—including a cast-iron gate wrested from a small village in the Highlands. Also: a custom-painted map of Scotland on the ceiling, which sounds rather awesome. The menu features old-fashioned pub grub, including charcuterie and smoked salmon, and the bar boasts more than 50 types of whiskey with a focus on rare single-malt Scotch.

· LUCKY 8’S CHINA HOUSE in Capitol Hill: Lucky 8 is next door to Diesel and across the street from Skillet Diner, in what used to be the Panzanella bakery approximately one million years ago and is now also home to Oola Distillery. Chef Justin Strnad (Osteria La Spiga, Palace Kitchen, Purple) makes Chinese food without any emphasis on a particular region or mania for authenticity; owners Bracey Rogers and his wife, Marcy Akiyama, just know that “Everybody likes Chinese.” (They’ve never been to China, but they’ve worked at Osteria La Spiga and Matt’s in the Market.) The decor is a little bit retro, a little bit contemporary, but not annoyingly so, with kung fu movies and a gong. Also! Delivery to Capitol Hill by bicycle.

· THE SEXTON in Ballard: If Paula Deen opened a restaurant in Seattle, it might look something like the Sexton. Where Madame K’s used to be in Ballard, the Sexton serves Southern-inspired comfort food: fried green tomatoes, mini corn dogs, shrimp grits, and hush puppies. And from the bar: juleps, 14 kinds of bourbon, and a cocktail called “The Dustbowl.”

* THE PUBLICAN in Green Lake: From the people behind Brouwer’s Cafe and Bottleworks (yay!), the Publican is a craft-beer bar focused on West Coast and American microbrews in the space where Bandolero (and, before that, the Pour House, and the Luau) used to be. Also: a complete liquor selection, as well as “hearty dinner fare” and breakfast all day to cushion the drinking.

* HOLY CANNOLI in Belltown: UPDATE: At Holy Cannoli—home of "Detroit's Finest Italian Delicacies"—Detroit native Adrienne Bandlow brings Seattle "the delicious food regional to the area that I grew up in, but also regional to the area in Italy my family comes from." Bandlow herself comes from a background in behavioral health and public policy, with an undergraduate degree in social justice, a master's in public administration, and post-graduate in risk management/decision analysis. Early analysis reveals that people are very happy she made the decision to start selling cannoli stuffed with sweet fillings and stromboli stuffed with meaty/veggie goodness at her narrow Belltown storefront. A few stools are available, but you'll be a hero if you get it to go back to the office or home.

* THE UPSTAIRS in Belltown: The Upstairs is a cocktail lounge from Cory Chigbrow (Pintxo) that is, in fact, up stairs—specifically, the stairs leading to the space where the art cooperative/gallery/cocktail lounge/nightclub the McLeod Residence used to be in Belltown. 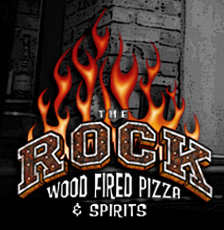 · THE ROCK in Queen Anne: Keep Rockin’ LLC, owners of this Tacoma-based wood-fired pizza chain, installed the 14th edition of The Rock on lower Queen Anne in the Maxwell Hotel. (The others are elsewhere in Washington, Oregon, Colorado, and Canada—so far.) Pizzas include the “Bad to the Bone” (pepperoni, bacon, ham, and ranch dressing) and the “Meaty, Beaty, Big and Bouncy” (bacon, ham, pepperoni, sausage, and meatballs). Booze includes “Rocktails” like the “Wango Tango Mojito.” According to The Rock’s website, Pizza Today Magazine thinks it’s “America’s Number One Independently Owned Pizza Chain.”

REOPENED
· GAINSBOURG in Greenwood: The Frenchy lounge is back and reportedly better than ever after a kitchen fire that, they say, just prompted them to do a little remodeling they’d been meaning to anyway.

RENAMED/RECONCEPTED
· BORSALINO’S PIZZA & PASTA in Eastlake: Formerly a Romio’s, Borsalino’s (no relation to the fedora company of the same name) retains a similar menu but with organic/locally grown and gluten-free options. They also offer 32-inch “Monster Pizzas” for those who wish to reconcile their twin passions of sustainable food and competitive eating.

Comments 3
Tags: Food & Drink Blogs
The Stranger depends on your continuing support to provide articles like this one. In return, we pledge our ongoing commitment to truthful, progressive journalism and serving our community. So if you’re able, please consider a small recurring contribution. Thank you—you are appreciated!
CONTRIBUTE NOW