Burning Beast—the world's meatiest feast in a field, with whole beasts cooked over open flames by Seattle's best chefs—was baaaaaack last Sunday for the fifth beastly year in a row. Burning Beast V sold out in under three hours. For those who didn't get tickets, here's a look.

And just a fraction of the meat... 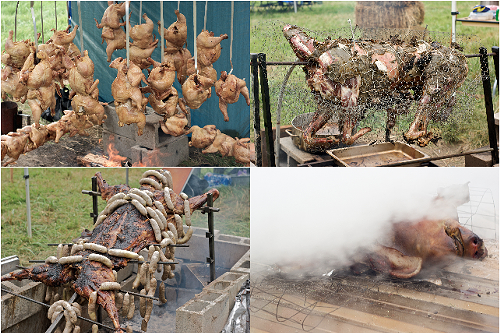 Gossip: Creole-food-truck king Matt Lewis (Where Ya At Matt) had one Mikey Robertshaw on his grilling team; Robertshaw was the head chef at Local 360, where his work got good reviews until he was reportedly fired for being too loud in the open kitchen. Now Robertshaw's going to be cooking at Roux, Lewis' new brick-and-mortar restaurant in Fremont. Lewis indicated he's looking into some sound-dampening for the space, but also seemed philosophical about chefs being shouty. They're looking at a September opening. 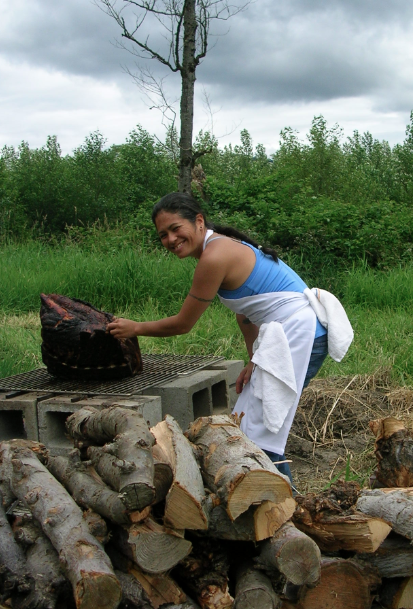 Maria Hines (Tilth, Golden Beetle) said she wasn't very organized this year, but then detailed how she'd marinated six beef shoulders in chimichurri, then cooked them sous vide for 12 hours at 180 degrees in Seattle before bringing them up to finish over a fire at the Beast. Her "disorganized" modernist approach worked beautifully: Her meat was among the tenderest and best of the day. 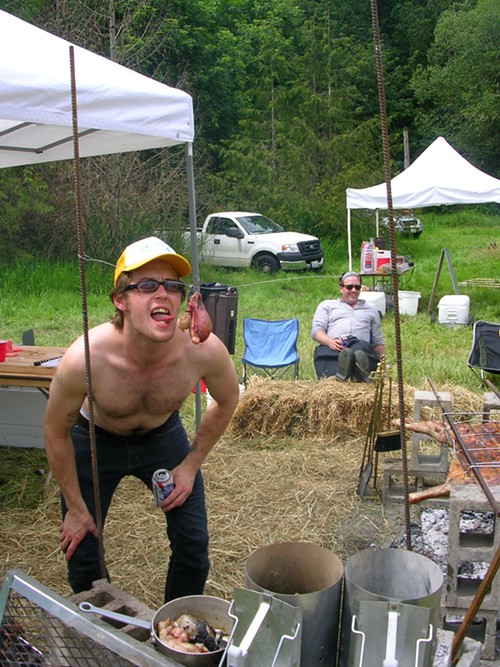 Mike Easton (Il Corvo) cured a bunch of pig back fat for two months, then wrapped a big wad of the resultant lardo around the end of a stick, along with rosemary and some duck fat for good measure (of course!). Then he lit the lardo-wad on fire and let the drippings fall onto his butterflied goat as it roasted—a notably smoky process in a field of smoke. He absolutely won for Best Basting. In the photo above, a member of his crew, Rex Grigg, is (pardon me) licking the goat's balls (his idea). Also cooking with Mike Easton: Miles James of Dot's Delicatessen in Fremont (which people love). 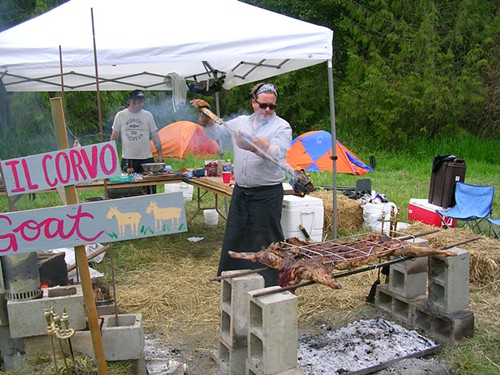 My colleague and friend Charles Mudede has waxed rhapsodic about the sound of a whole duck being chopped. This sound is even better when you are waiting hungrily in a line in the middle of a beautiful field—chop, chop, chop. 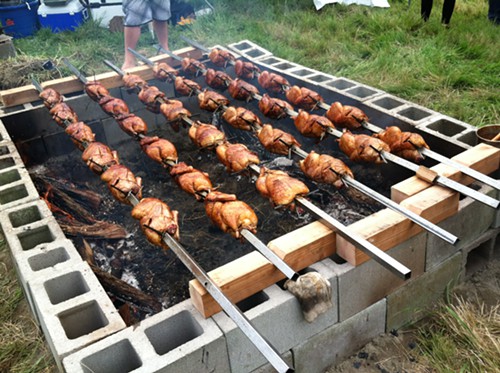 The sight of the oysters caused a mob scene... this is after it died down: 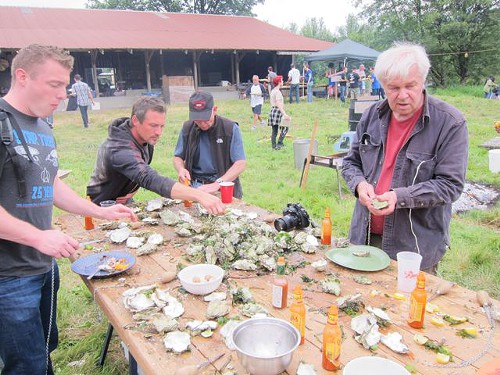 And a close-up of Jon Rowley's specially designed oyster table, with shucking knives attached and shell-disposal-hole in the middle: 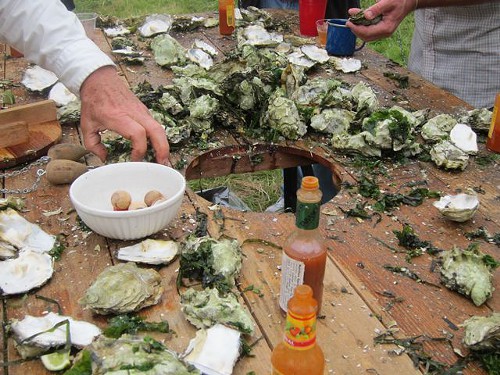 Ron Jones brings a team of "amateur" cooks every year, and every year they do something as good or better than the professional chefs. (He modestly says that's because they work on their idea and execution starting the day after each Burning Beast.) His pork legs, interred in snowdrifts of salt inside a plywood coffin (based on a method by Argentine chef Francis Mallman), can only be described as succulent. Update—here's a photo: 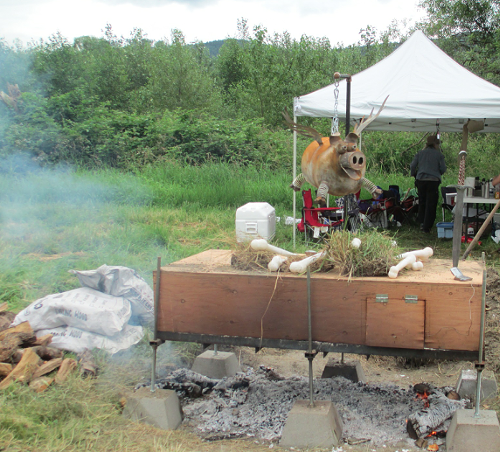 And Bathtub Gin returned to serve its excellent meat-infused cocktails, including the Exumas: 151-proof rum, two-day-infused spiced-pork vodka (they had to skim the fat off the vodka before use), grilled pineapple, maple syrup, and ginger beer. 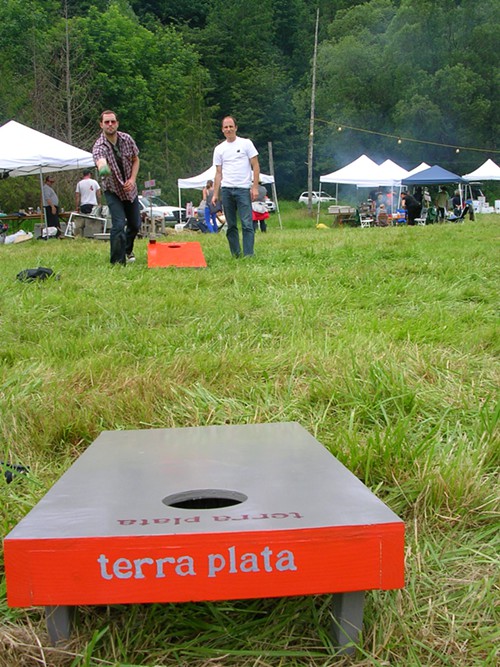 The winner of audience-awarded Best of Beast: Bellingham's the Copper Hog, something of a dark-horse candidate that prepared bison three ways—leg on a spit, sausage, and bresaola, all delicious, served with a vivid Bing cherry gastrique made in a giant pot on the fire.

Smoke Farm—the 360-acre arts, culture, and education habitat on the Stillaguamish River an hour north of Seattle—was as lovely as ever, and its fine craftspeople (led by poet/carpenter Arne Pihl) built the sacrificial Beast. It had a large set of dangling testicles that were soaked in diesel and used as ignition. 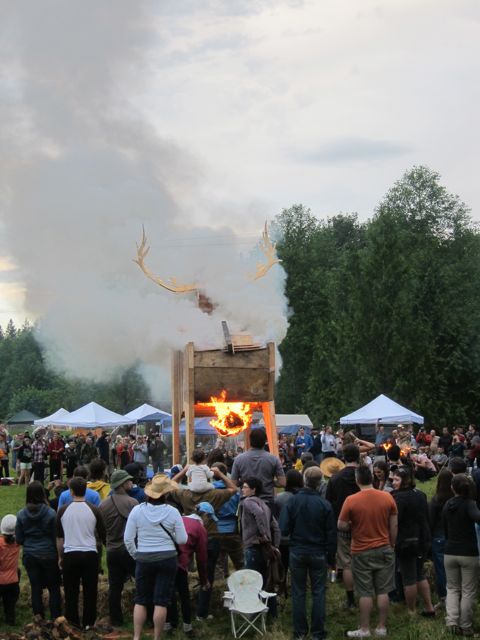 When the Beast's balls fell flaming to the ground, every man in the crowd flinched. 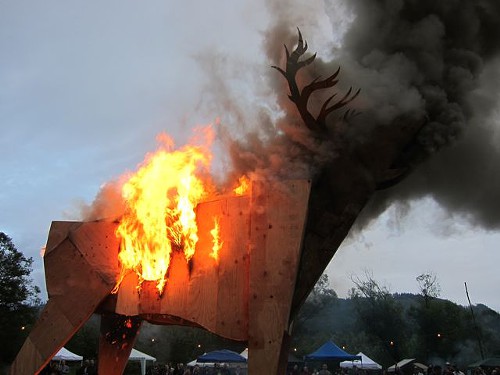 And it burned big and long, to everyone's delight. 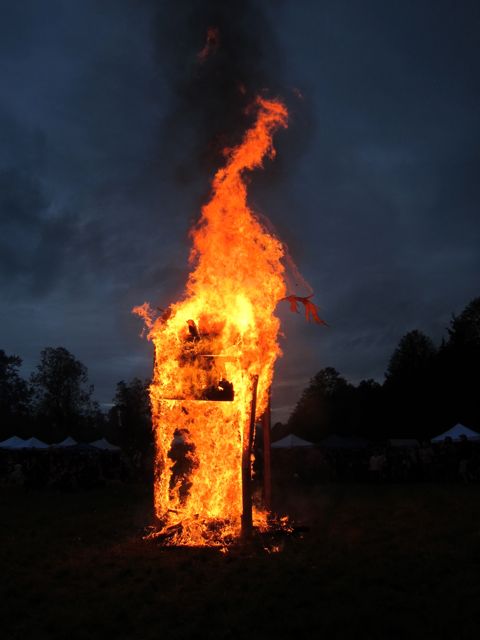 Comments 10
Tags: Food & Drink Blogs At Large
The Stranger depends on your continuing support to provide articles like this one. In return, we pledge our ongoing commitment to truthful, progressive journalism and serving our community. So if you’re able, please consider a small recurring contribution. Thank you—you are appreciated!
CONTRIBUTE NOW