Damn the Weather Is Damn Good

Smart Cocktails and Food That Deserves an Exclamation Point 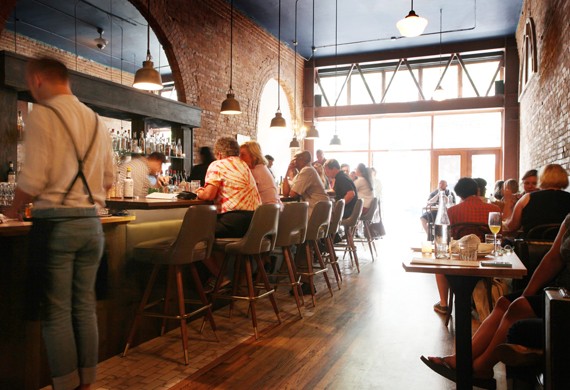 And not trying too hard. And the Caesar salad sandwich! Kelly O

Damn the Weather looks exactly right, and it's got great people involved, and it's brand-new in Pioneer Square; then there's the issue of whether you like the name or not. But first, we must discuss their Caesar salad sandwich.

The bread-roof on this sandwich is, ingeniously, a toad-in-the-hole. (In case you've been deprived, a toad-in-the-hole is when you cut a circle out of a slice of bread, then fry it with an egg inside the hole.) Damn the Weather's version is made with golden-butter-crisped brioche, and the egg is cooked very easy. On the side of the plate is the also-golden-butter-toasted circle of brioche that was excised; it has a single silvery anchovy in repose across it. But the sandwich itself—it deserves an exclamation point! The foundational slice of bread is also pan-fried in butter. The filling is, as it sounds, Caesar salad: bright-green leaves of Willowood Farm's romaine, dressed unstintingly with an especially lemony dressing. When the egg yolk is released—the eggs are from happy, pastured Skylight Farms hens—by your fork or knife, there's almost a hollandaisey effect as it mingles with the Caesar dressing. Meanwhile, the incredibly light fried brioche is better than the best croutons, and the lettuce is miraculously still crisp and crunchy. It costs $9, and damn, it is good.

Damn the Weather itself is where half of the New Orleans Creole Restaurant used to be. It's a narrowish, deep, very-high-ceilinged space, with classic Pioneer Square brick walls, a hardwood floor, and a big mirror behind the bar. There are two crystal chandeliers, but they're modest ones; neither of them is trying to make a fancy fuss. In the back, near the midsize open kitchen, three smaller mirrors hang on the wall, and large wood shelves hold wine and sundries and a pair of pineapples (a symbol of hospitality). The chairs are bentwood, and there's a sign directing you to the French Quarter, probably left over from the previous occupant. That's really about it. The space—soaring and old-fashioned and un-tarted-up—is allowed to just be gorgeous. (And, warning, pretty damn loud when it's full.)

Behind the Damn the Weather bar, you'll find local heroes Bryn Lumsden, formerly of Rob Roy, Vito's, and Vessel (and also the band Fleet Foxes), and Jay Kuehner, beloved from Sambar. Their current cocktail list includes the tropical, gulpable Waltzing Matilda ($11), with gin, passion fruit, orange juice, lime, and cava—as the menu says, "Sorry, French 75." The Uppfriska ($10), which means "refresh" in Swedish, cuts the powerful taste of aquavit with cooling cucumber juice and lemon; it's the most beautiful shade of green. The Agricultural Punch ($10) blends cane-juice rum with its progenitor, raw cane juice, plus lime; its sweetness is anti-cloying, and it tastes nuanced and alive. There's a calvados and tonic ($8), which is an excellent idea, and a Pimm's Cup made with the addition of cognac ($10), ditto. In a world of overambitious craft cocktails, these drinks are smart, interesting, and make you want another of the same, right away, please.

The maker of the Caesar salad sandwich is Eli Dahlin, who was chef de cuisine at Renee Erickson's mightily acclaimed the Walrus and the Carpenter for almost four years. The rest of his menu is adventurous, too. You can get a plate of fried salt-and-pepper chicken skins, accented Thai-style with peanuts and chili peppers ($6). Or beef heart tartare ($12), a richer-than-ever version cut with a side of bitter tea leaves and served with very thin, very crisp, pleasantly greasy and salty sourdough crackers. Both of these were intense; a half-order might be enough for two to share. One night's fried squash blossoms ($9) were stuffed with duck rillettes, tempura-coated, drizzled with the tiniest bit of honey, and served with very dark, very salty oil-cured-olive tapenade—it may sound weird, but every element interacted in flavor and texture to make magic. A zucchini carbonara ($10), with ribbons of the squash acting as the pasta, was merely very good. Same with two salads: heirloom tomato with yogurt standing in for the usual mozzarella, plus a drinkable vinaigrette ($10), and crimson lettuces (pretty!) with peaches (hallelujah!), feta (so good with the peaches!), pumpkin seeds (for crunch), and lardo (arguably overkill).

Not all of Dahlin's experiments work perfectly. The falafel-like lamb kibbeh ($9) had good flavor, with lots of turmeric, but it was fried until it had a hard carapace and was dry inside. An escargot sandwich ($12) had a squishy roll, soft escargot, and an extremely mild parsley butter sauce; it didn't taste bad, but it didn't taste like much. But then one of the most boring-sounding items on the menu was one of the best: The sweet potato dumplings ($12) were matched with a salty-sharp snow of pecorino, the floral herbaceousness of Russian sage, and the richness of brown butter. (Russian sage, come to find out, is not actually in the same genus as sage, is not from Russia, and looks more like lavender. The internet is divided on whether it's poisonous or not; it doesn't seem to be.) Things I have not tried but very much want to: the duck hot dog ($10) and the pastrami burger ($12). None of this assertive food is destined to go well with any of the cocktails, but if you want, there's beer and wine. As for the service, it's unfailingly pleasant, even when they're very busy, which they often are.

Damn the Weather is an old-timey cocktail (gin, triple sec, sweet vermouth, orange juice) and, if the place's umbrella logo is any indication, an exhortation for the rainy months. It's a self-conscious name, but what the hell—Damn the Weather is great.

Comments 14
Tags: Food & Drink
The Stranger depends on your continuing support to provide articles like this one. In return, we pledge our ongoing commitment to truthful, progressive journalism and serving our community. So if you’re able, please consider a small recurring contribution. Thank you—you are appreciated!
CONTRIBUTE NOW