No, No, NO: Seattle's Hurricane Cafe Is Closing 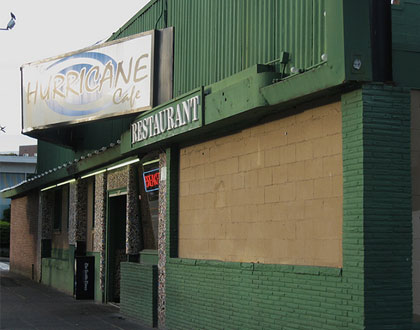 At the end of this year, Seattle will lose yet another landmark old-school spot: the Hurricane Cafe. Guess who bought the downtown property and will be tearing the Hurricane down? Amazon (under the name of its cuter, smaller-sounding affiliate Acorn Development LLC).

Owner Neil Scott confirms that after two decades of 24-7 service, the Hurricane's last day will be New Year's Day 2015 (which is considerate for those who'll need it after New Year's Eve partying). Before it was the Hurricane, the space was the also-awesomely-divey, also-24-hours the Dog House for approximately a grazillion years—and before that, it was another 24-hour place called the Bohemian Continental, which moved into the building in the 1920s, meaning almost 100 years of 24-hour service on the site. Scott started out as a dishwasher at Beth's Cafe (which, miraculously, is staying open, for now, as far as we know), and was at the Hurricane when it opened. He says he's got two employees now who've been at the Hurricane for a dozen years, two more who've been there for a decade, and two clocking in at seven years each. Morale is "pretty good," he says. "Everybody's sticking around until the end."

"It’s not the way we wanted to go out for sure—losing a lease and getting torn down," he says. "But we’re a standalone building downtown with a parking lot—it was bound to happen."

Comments 104
Tags: Food & Drink Blogs
The Stranger depends on your continuing support to provide articles like this one. In return, we pledge our ongoing commitment to truthful, progressive journalism and serving our community. So if you’re able, please consider a small recurring contribution. Thank you—you are appreciated!
CONTRIBUTE NOW