Bodegón is bringing seasonal Spanish cuisine to Georgetown every Friday night. The Stranger

Chef Chris Lally, a native of Lacey, Washington, is back home and making the most of what spring in the Pacific Northwest has to offer: asparagus, green garlic, and clams and octopus from the waters of Puget Sound. At his three-week-old pop-up, Bodegón, Lally showcases ingredients in simple preparations that hold the vibrant and bold flavors of Spanish cuisine. The reverence for products, which he's sourcing mainly from local purveyors, should come as no surprise: Lally cooked at the storied Chez Panisse for more than five years.

On a recent visit to Bodegón, which is taking up residence at Georgetown's Two Tartes Bakery and Cafe on Airport Way every Friday, I was impressed by offerings such as a salad of shaved celery and fennel, brightened simply with lemon juice and boquerones, then slicked with good-quality olive oil. Goat cheese, wrapped in a fig leaf and warmed in the oven, was tangy and creamy and topped with roughly chopped almonds drowned in a luxurious, intensely grassy olive oil. Octopus was deftly braised in rioja wine until tender, then served with slices of softened potato. The dish was finished with a generous sprinkling of smoked paprika and even more olive oil.

Paella for two was wonderfully executed: Soft rice, its underside forming a crunchy layer well worth scraping the bottom of the pan for, was dotted with chorizo, manila clams, and asparagus, and drizzled with a heavenly lemon-and-anise-flavored aioli. Lally says the menu will change weekly, but as long as paella is on the menu, you'd be wise to order it. To drink, Bodegón offers four Spanish wines—two red and two white—as well as a few beers.

Lally and his wife, Erin (who graciously handles the pop-up's front-of-house affairs), do a great job of transforming the cafe (which, by day, is a typical "funky" coffee shop crowded with mismatched couches) into a clean, bright space. The couple, who have two young songs and live nearby in Hillman City, chose Seattle because, says Lally, "the city is so attractive for a young family like ours and, like California, the food is good." He expressed excitement about the recent reopening of the Columbia City farmers' market, especially as he looks to partner with farms to supply the pop-up's food. "Like Chez Panisse," says Lally, "our goal is to engage in sustainable practices and have a neighborhood presence."

The name Bodegón, which translates roughly to "tavern" or "pub," is directly inspired by the couple's time in Spain. They honeymooned in Galicia, then returned for a longer spell a few years later. Lally tells me, "We were blown away by the simplicity and vigor of the food. One tavern in particular had everything we had dreamed of for our own future restaurant: small and family-run, a jovial and easy atmosphere, delicious food, where the locals came to share small plates and each other's company."

Bodegón will be popping up every Friday night from 5:30 to 10:30 p.m. through the summer. No reservations are required, just walk on in. Its website is under construction, but you can find the basics right here. 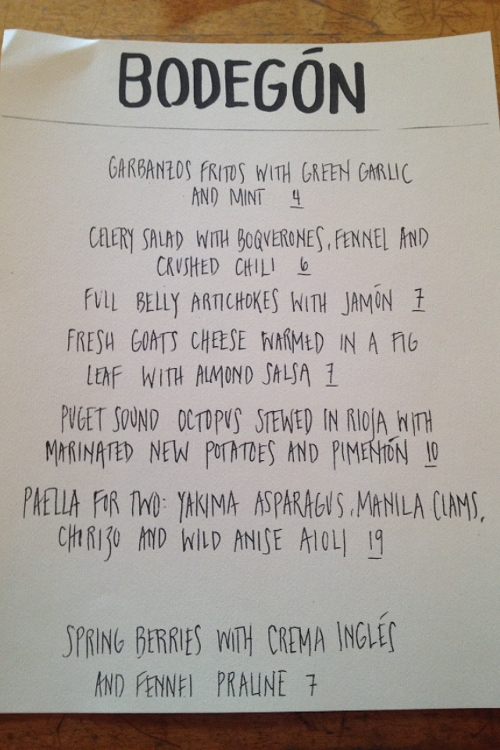 Order the paella. The Stranger
Tags: Food & Drink Blogs
The Stranger depends on your continuing support to provide articles like this one. In return, we pledge our ongoing commitment to truthful, progressive journalism and serving our community. So if you’re able, please consider a small recurring contribution. Thank you—you are appreciated!
CONTRIBUTE NOW