The Long, Fascinating Road from Successful Pop-Up to Kraken Congee

(There Was a Brief, Arguably Disastrous Reality-TV Detour in the Middle) 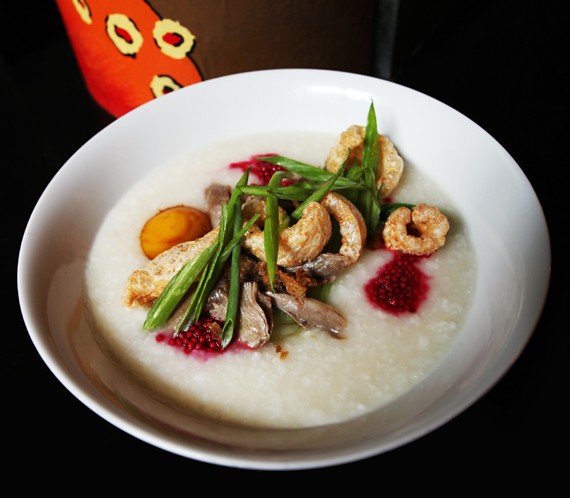 Back in early 2013, three chefs at the Ruins, Seattle's staid and ostentatious private dining club in Lower Queen Anne, had an idea. They wanted a creative outlet. So the three of them—Garrett Doherty, Shane Robinson, and Irbille Donia—began scheming what would become Kraken Congee.

Donia had experience with pop-ups, having held several successful modern Filipino dinners under the name Irbille Edibles. The trio decided to use congee—a simple rice porridge found in many cuisines throughout Asia—as a base to showcase other items like duck confit laced with Chinese five-spice, pork-stuffed squid accented with briny black squid ink, and pork-belly adobo braised Filipino-style in soy sauce and vinegar.

"We were going to do a pop-up," recalls Doherty, "and just see what happened."

For the first Kraken Congee, held in April 2013, each chef was responsible for getting 20 diners to show up so they could at least break even at the end of the night. Instead, says Doherty, "Three hundred people tried to show up, and it was a shitshow." Once a month, for nine months straight, Kraken popped up in kitchens around town, serving hundreds of bowls of congee each night.

By taking cooking techniques and flavor profiles from around the world and adding them to a beloved (but, let's face it, homely) comfort food, Doherty, Robinson, and Donia (who has since left the partnership) came up with something entirely new—something diners were willing to line up for.

Just over two years later—and three months into their subterranean brick-and-mortar location in Pioneer Square—Kraken is cooking with the same creativity and intriguing flavor combinations that should continue to draw in new diners.

The five-spice duck confit congee ($14) remains on Kraken's menu. ("The greatest thing about a pop-up that's successful," says Doherty, "is that you're basically doing your research and development before the restaurant opens. You know what people like right off the bat.") The duck meat, musky and fragrant with star anise and clove, is dark and satisfying, and it comes with strands of steamed bok choy and airy pork cracklings that bring a welcome, salty crunch to the dish. A soy-cured egg yolk—round, perfect, and golden like the sun—is a pleasure to break into, its contents creating a rich sauce to swirl into the porridge.

Even better is the hanger steak congee ($14), porridge topped with tender slices of grilled, irony beef steeped first in a marinade of fish sauce, lime juice, sugar, and chilies. Continuing with the Vietnamese flavors, cilantro leaves and shaved raw shallot bring brightness and bite. But I was most surprised and taken with the sweetness that came from blistered cherry tomatoes—wonderful, with just a bit of char—and crispy bits of broken peanuts.

The octopus and kimchi fried rice ($13) was better in theory than in practice. It had plenty of the complex, smoky flavor that comes from being wok-fried and the pungent, spicy sourness of kimchi, but the dish lacked any real texture. Pieces of octopus were so thinly sliced that instead of providing pleasant, chewy bites, they were flimsy and forgettable, getting lost amid the soft grains of rice.

When I ask Doherty about the wok, which Kraken inherited from the kitchen's previous tenants, Thai street-food restaurant Little Uncle, he admits that he and Robinson had never worked with a wok before. But he says that they are learning and excited to add more wok-cooked items as they get more experience with it.

I love the idea of a restaurant menu evolving because a piece of kitchen equipment pushes its chefs to experiment. It's an open-minded approach that is no doubt helped along by Kraken's origins as a pop-up.

"The biggest thing about pop-ups," says Doherty, "is that there are no rules. You get to tell your story however you want to."

Kraken Congee's story is a complicated one—one that involves, improbably, an appearance on a CNBC reality television show called Restaurant Startup, where the chefs competed to get a cash investment from celebrity judges. After being flown to Los Angeles three times to film the show and cook under stressful conditions ("We didn't necessarily represent ourselves all that well," says Doherty), Kraken ultimately landed a deal with Dallas-based celebrity chef Tim Love (he has a national sponsorship deal with Hellmann's/Best Foods mayonnaise), who is a partner in the restaurant.

While the show gave Doherty and Robinson funding, it also cost them their partnership with Donia. For reasons that no one seems to want to discuss, the filming of the reality show was, in Donia's words, "the beginning of the end" of his involvement with Kraken.

It's impossible not to think that Donia's decidedly Filipino culinary vision (he continues to hold his modern Filipino pop-ups under the name Lahi) played a role in the many Filipino elements on Kraken's menu—elements that are their most successful.

My favorite dish by far was Kraken's kare kare Wagyu beef ($13), a Filipino stew traditionally made with oxtails, tripe, eggplant, long beans, and banana blossom that's thickened with peanut butter and served over rice. Kraken's version is made in the wok with hand-shaved noodles, the shape of which were more amorphous than noodley but still delicious (and an interesting twist on the expected starch). It's served with the traditional accompaniment bagoong, a salty, fermented shrimp paste. Other unexpected and creative touches caught my attention, like toppings of pork floss (sweet, salty, and airy—think pork-flavored cotton candy) and a crumbly peanut powder.

Having grown up eating kare kare regularly, what struck me most was how spot-on Kraken's Filipino flavors are. Despite its modern elements, the kare kare tasted familiar and homey. I can say the same for the pork-belly adobo pinch buns ($8), chunks of meltingly tender meat lacquered in a beautifully reduced tangy adobo sauce and dressed with an aioli made from calamansi, a bright and sour native Philippine lime.

Doherty isn't Filipino, but his connection to the cuisine is deeply personal, and one that has grown over nearly two decades. "My wife wanted to feed our kids the food she ate when she was a child, but she never took the time to learn to cook from her mother," he says. "I'd never call myself a Filipino chef, but I do the best that I can do."

Asked about the Filipino elements on Kraken's menu, Donia had this to say: "Filipino food is bigger than me. Our food may be underrepresented, but it is here. I'm just glad to know that the Filipino influence is there [at Kraken] and being shown off."

Despite the difficulties and strange circumstances that landed Kraken Congee in its current place, it's a success story—and certainly one that the many itinerant chefs regularly holding pop-ups in restaurant kitchens across the city look to for inspiration.

"It's really hard to start a restaurant here," says Doherty. "There are five chefs who own something like 45 restaurants in this city, and if you're not part of that crew, no one talks to you."

Doherty isn't bitter, but his words echo something I've been hearing from other people in the Seattle restaurant industry for a while now—and something I've been wondering about myself. As chefs and restaurateurs who already own multiple restaurants continue to open even more at a steady clip, how much more difficult does it become for newcomers with less capital and less name recognition to compete for investors, locations, and customers? As Seattle's restaurant scene grows, could it also become less inclusive and diverse?

"From the beginning, the idea with our pop-ups was that we were just going to do it ourselves. We were going to make our food, people would come, and they were going to like it or not."

Doherty pauses and then, with a trace of marvel in his voice, finishes: "And they did. So we're here."