The Largest (and Coolest?) Urban Winery on the West Coast Just Opened in Georgetown

The new Charles Smith Wine Jet City is a gargantuan venture—a sprawling, 32,000-square-foot winery with two tasting rooms and facilities to produce 45,000 cases annually. The mega-winery’s move into Georgetown—a neighborhood that has traditionally been dominated by cottage industry and straight-up industry—is certainly bold, and definitely timely given the amount of wealthy young people gallivanting about this city right now.

Even if you’ve never heard of Charles Smith, you’ve likely drunk his wine. He’s responsible for making much of the vino you’ve probably bought from QFC at 1:45 am based solely on the label and the price: Kung Fu Girl Riesling, House Wine (which he sold a mere two years after its inception as a label), and Charles & Charles, among others.

When it opened last Saturday at the northern edge of Boeing Field, Jet City became the largest urban winery on the West Coast. For the big opening celebration, 1,500 guests were treated to burlesque, live performances by Mudhoney and Dead Moon, and enough wine to make Dionysus say uncle.

But given Georgetown’s status as one of the last bastions of our city’s hardscrabble heritage, and the amount of fretting over development and growth in Seattle of late, I wondered how Jet City would fit into the neighborhood.

Before a media tour of the new facility last week, I was ready to dismiss Jet City as too lavish for Georgetown. And while I did discover a ton of fancy shit there, I also came away awed by the design and impressed by Smith’s genuineness. (Smith seems to realize the dynamic he’s dealing with, given the amount of emphasis placed on Georgetown’s historic status and creative vibe in his promotional materials.)

The winery—like its predecessor in Walla Walla—was designed by Tom Kundig, the Seattle architect known for his upscale industrialism and for winning nearly every important architectural award ever. The front door is solid metal and extends the entire height of the building, yet opens easily. There is a massive sheet-metal staircase, a bathroom sink made from one enormous slab of black stone, two-story floor-to-ceiling windows, a sprawling view of Mt. Rainier upstairs, and blue LED mood lights in the working areas of the winery (“to keep our winery hip” CSW’s marketing manager Lauren Palmer, told me). To top it all off, the tasting room features the most gratuitous use of reclaimed wood I have ever seen: a nearly thirty-foot-long bar composed entirely of stacked two-by-twelves rescued from the previous tenant.

After the tour, all I could think about is how I’d come back just to wash my hands in that fancy-ass sink and pretend that when I go back outside everyone will be wearing shiny vinyl jumpsuits and driving around in floating cars. 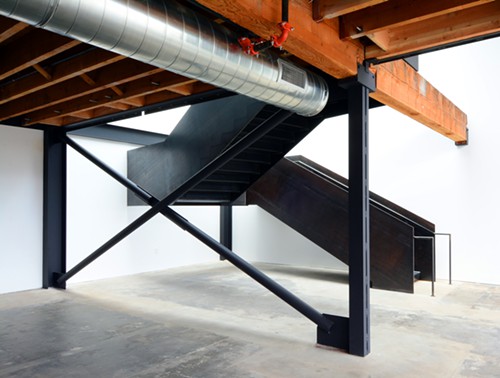 Even the stairs look cool. Courtesy of Charles Smith Wines

As for Smith, he’s downright disarming. He greeted us sporting a mane the Melvins’ Buzz Osborne would be jealous of, dressed in skinny black jeans, an “In Lard We Trust” T-shirt, and pinstriped Vans. He looks like the type of guy whose ass has been glued to a stool at the 9lb Hammer for years.

When he shrugs his shoulders and says things like, “This is just how we eat, this is a normal lunch we would have [out in the vineyard]” while presenting a salad of local greens and shaved fennel accompanied by baguette and rounds of insanely delicious goat cheese, it somehow comes off more as a nod to the refreshing simplicity of the food than as ostentation.

It’s difficult to resent him for opening his winery in Georgetown because he so clearly loves the shit out of the neighborhood. After a short speech on drawing “inspiration” from his new digs, I began to have the sneaking suspicion that he moved to Georgetown primarily so that he can walk to Fonda la Catrina for lunch.

In addition to his Georgetown street cred, Smith exudes a more important kind of credibility: knowledge and passion about wine. When he set out to become a winemaker, he did so by borrowing $5,000 and moving to Walla Walla to roll the dice. You certainly don’t turn someone else’s five grand into three different winemaker of the year awards and a 20-million-bottle-a-year business if you don’t know what you’re doing. The former rocker—he famously managed the Ravonettes—managed to build himself a scrappy little empire and, lo and behold, it's paying for more than just keeping the party alive.

Jet City will churn out 45,000 cases of wine per year. Courtesy of Charles Smith Wines

Although the Jet City facility will churn out a boatload of wine at 45,000 cases per year, that represents only about 6 percent of the company’s total production, making it more of a flagship than a mothership. But Smith was quick to emphasize that he’s not just there to have rock shows and host dinner parties. In a promotional video on the winery’s website, he says, “Georgetown is a place where people make stuff. They make beer, they make chocolates, they make mechanical things. And I make stuff. We’re not going to be selling aprons that say, ‘Life is a cabernet.’ We’re not going to be selling some kind of bullshit.”

If Seattle must have more corporate overlords, and it appears that we must, I just hope that they’re more like him.

Comments 1
Tags: Food & Drink Blogs
The Stranger depends on your continuing support to provide articles like this one. In return, we pledge our ongoing commitment to truthful, progressive journalism and serving our community. So if you’re able, please consider a small recurring contribution. Thank you—you are appreciated!
CONTRIBUTE NOW