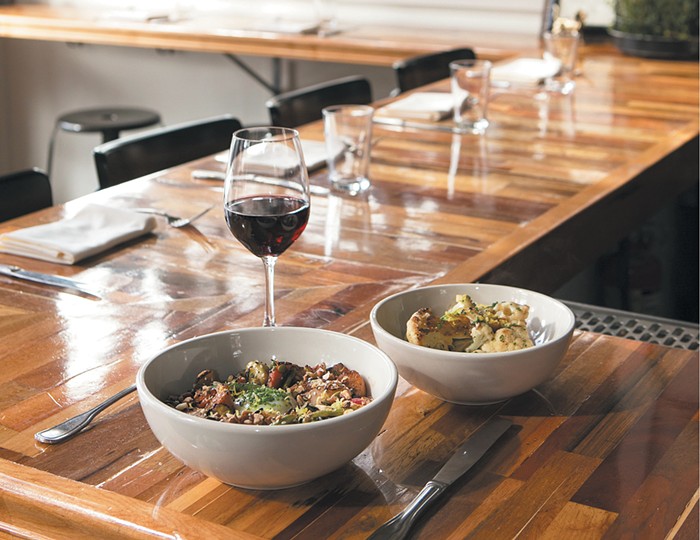 At Eve, it's not just big bowls of raw ingredients. Jennifer Richard
Tweet

At Sweetgrass Food Co., a quick-service downtown restaurant that opened last fall, you can order amaranth grits with fennel and kale for a sit-down breakfast, or just grab some chia-seed pudding and be on your way. If you need caffeine, you might order a matcha latte, made with green tea, or perhaps you'd like to try the Sweetgrass coffee, drip coffee blended with organic grass-fed butter and coconut oil.

Juicebox, a proudly organic juice shop and cafe on Capitol Hill that's been open for just over two years, also serves a version of butter coffee, this one made with espresso, Irish butter, and something called "brain octane MCT oil." According to the woman behind the counter, the coconut-oil derived MCT oil (MCT stands for medium chain triglycerides) allegedly boosts energy and brain function.

Today, Seattle is experiencing a resurgence of healthy eating, one that's marked by contemporary marketing flourishes like brain-enhancing oils and detoxifying juices. But last year's openings of Sweetgrass Food Co., Queen Anne's Bounty Kitchen, and Fremont's Eve, as well as the more recent debuts of downtown's Anar and Ballard's Stock, also signal a shift toward a more traditional, conscientious way of eating. Menus are composed of dishes dominated by vegetables, whole grains, and fruit—all of the ingredients organically and locally sourced whenever possible.

Sara Dickerman, Seattle-based food writer and author of the recently published cookbook Bon Appétit: The Food Lover's Cleanse, believes the current trend is as much a new movement as it is a reaction to a dining trend that defined the last decade.

"So much of our focus now is on dining out. For a while, the feeling was like, 'If you're not eating all the pig, all the time, you're not really eating,'" Dickerman says. "So if you're eating a larger and larger portion of your meals out at restaurants, it can't always be plates of rillons with rillettes, with a little bit of lardo on the side."

In moving away from such meat-centric fare, chefs and home cooks like Dickerman have discovered the delight of cooking more vegetables and whole grains. They're crafting dishes that, according to Dickerman, are "scrumptious, textured, and layered."

Those are definitely words I'd use to describe the Havana Libre bowl ($13) at Bounty Kitchen. A cluster of black beans and forbidden black rice—earthy and nutty, dark as midnight on a moonless night—were the perfect counterpoint to peppery arugula that had been tossed with a bright, sunny citrus dressing. (The dressing, creamy and rich, is made with cashews instead of dairy.) The dish had even more dimensions of flavors, including a hash of diced sweet potatoes warmed with cumin and oregano, as well as fresh cilantro and buttery mashed avocado.

The brown rice pottage ($8.50) at Sweetgrass Food Co. is similarly gratifying: a porridge of long-simmered brown rice topped with meaty shiitakes, purple adzuki beans, and a soft-boiled egg. I ordered the pottage, which is served all day from 7 a.m. to 8 p.m., as a late-afternoon lunch, which may explain why it lacked much broth and was rib-stickingly dense. Yet it was still quite good, rescued by its many fresh elements: shaved fennel, sprigs of cilantro, chopped scallions, paper-thin slices of raw, piquant ginger, and, best of all, sweet-and-tart pickled red chilies.

On both occasions that I sat in Sweetgrass's airy, light-filled dining area, I watched most of its office-dwelling customers take their smoothies and Buddha Bowls to go. With customers in and out in less than five minutes, the restaurant's appeal became clear. It was something Dickerman echoed when we met over a bowl of Juicebox's coconut-milk yogurt parfait.

"In a more casual environment—for everyday meals when just sustaining yourself—why not sustain yourself in a lovely way that's more flavorsome than the Whole Foods deli aisle?" she mused.

While Sweetgrass and Bounty Kitchen are decidedly casual daytime spots, Fremont's Eve is something different: a full-service restaurant suitable for a special-occasion meal, complete with knowledgeable service, a biodynamic wine list, and a kitchen that's willing to take some creative risks. Eve's menu has a considerably higher amount of proteins and fat but those ingredients—goat butter, bison, chickens from esteemed Mad Hatcher Poultry in Ephrata—are very much in line with the restaurant's vision of "kind food [that] supports the farmer, the earth, and your body."

Your body will feel deeply warmed and nourished—and your taste buds awoken—by a steaming cup of bone broth ($6) made from roasted chicken bones, coconut, and orange zest. It's simultaneously bright, milky, and musky—and so rich with collagen that if you let it cool for a few moments, it settles into a thick, almost gelatinous mixture before your eyes.

Chicken fried barley ($18), a play on chicken fried rice, is an intriguing, if imperfect, dish. Overall, the plate of stir-fried barley, chicken, green beans, and carrot was a little bland. It begged for a sauce, something more substantial than the silky yolk of the poached egg that it's topped with. But it's also imbued with a dark, smoky flavor—the distinct breathy char that comes from the high heat of a well-seasoned and deftly handled wok—that keeps you coming back to the dish, despite its flaws.

The restaurant's signature dish, the Eve hot bowl ($14/$16 with a poached egg) is ostensibly virtuous: Ancient and whole grains such as barley, freekeh, and wild rice are mixed with brussels sprouts, radishes, beets, and blistered carrots, and then topped with crunchy pumpkin seeds, crushed almonds, and pecans. But after the first few bites, you realize that everything is coated in a rich dressing made with tahini and olive and sesame oils, and that the vessel you're eating from is both very wide and very deep. Yes, the dish is healthy and vegan, but decadence is its defining characteristic.

Eve's hot bowl reminded me again of something Dickerman said. "If you're trying to lose or maintain weight, you have to be careful about portions," she said. "Just because you're in a health-focused restaurant, you still have to look with a slightly cynical eye."

Dickerman has worked as both restaurant cook and restaurant critic, and she still dines out often. But with The Food Lover's Cleanse, she's insisting on the role that home cooking can also play in a more healthy diet and lifestyle.

"I actually don't believe in a cleanse, per se. But I can make a commitment to myself to cook more vegetables and more whole grains, and be a little less focused on big meaty portions. You'll make better choices if you take some of that into your own hands."

This story has been updated since it was first published.