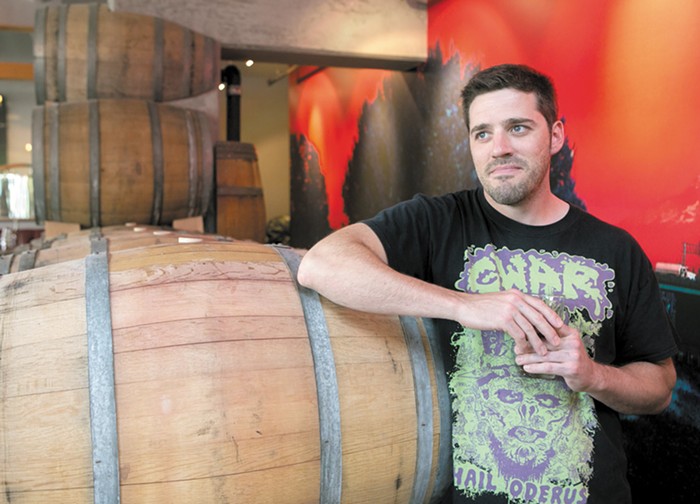 Travis Kukull wants Seattle food to be “creative and individualistic,” but diners want something more conventional.

Two weeks ago, I sat on a barstool at South Lake Union's restaurant/brewery Mollusk, enthralled by a sandwich. Though it was called the "Seattle Dog," it bore little resemblance to our city's signature hot dog made with cream cheese and a squishy bun. Instead, chef Travis Kukull took a house-made Malawi-spiced lamb sausage, fragrant with coriander and red chilies, tucked it into a soft baguette (also made in-house), and slathered it with a dusty pink smoked paprika cream cheese. Between the gamy spiced meat and tangy cream cheese, there was plenty of flavor. But Kukull didn't stop there, instead adding layers of heat, sweetness, sourness, and spice—pickled fresno chilies, purple cabbage kraut, dark caramelized onions, a gritty curry ketchup, and Kewpie mayonnaise. It was thrilling—sloppy, intense, almost too much, and somehow not nearly enough.

Since Mollusk's opening in late October of 2015, the bold and playful menu created by Kukull, along with former chef de cuisine Kim Sturts and pastry chef Tanya Hoang, introduced Seattle diners to unfamiliar ingredients and flavor combinations. Last winter, I enthusiastically devoured Kukull's version of fish 'n' chips, made not with deep-fried cod and potatoes but an oily, cartilage-rich grilled yellowtail collar, and delicate chips made from lotus roots and sunchokes.

Kukull's menu challenged people. During the same meal, I looked around the large dining room to see several tables of customers who were thoroughly confused by his "Nachos Picasso," made with delicata squash chips, Super Titi garlic crackers (a popular Indonesian snack), smoked avocado crème frâiche, Padrón peppers, and blue cheese. It was clearly not the platter of nachos people were expecting.

"The food I create is the way I want Seattle to be and eat," Kukull told me last week, just days after announcing that he would be stepping down as chef of Mollusk. "I want it to be weird and creative and individualistic. When I eat someone's food, I want to know that that it's specifically that chef's food. I want this town to be supportive of things that are different, not just the traditional idea of 'success.'"

The culinary landscape of South Lake Union is dominated by typical models of success. Its streets are lined with chains such as Homegrown and Chipotle, as well as eateries from chefs Tom Douglas, Ethan Stowell, and Josh Henderson, who oversee restaurant empires. South Lake Union is a rapidly developing area of tech offices and high-end apartments. Kukull and his business partner, Cody Morris, Mollusk's brewmaster, found neighborhood diners unreceptive to Kukull's nontraditional food.

Kukull tried to develop a menu of burgers and fries. But, he conceded, "I don't even know how to do that. Even when I try, I make it weird somehow. What I'm doing is obviously not working in this neighborhood. So I decided to stop.

"[My leaving] comes out of caring for this business," said the chef, who still maintains his ownership and financial stake in Mollusk. "Some people may not see it that way, but I really do want this place to succeed."

When Kukull and Morris opened their first venture, Gastropod, in a tiny space tucked away in an industrial corner of Sodo in 2013, they found an audience hungry and thirsty for their oddball creations. Kukull's menu included kimchi scones, bubble tea pie, and an ever-changing okonomiyaki—a savory Japanese griddled pancake—versions of which included asparagus and mochi with hearts of palm salad and wasabi mayonnaise, as well as blackened broccoli and abalone topped with barbecue sauce and fish-sauce-infused mayonnaise. Customers eagerly washed Kukull's creations down with Morris's signature sour blonde ale, called Partytime!!!, and other beers brewed with ingredients such as black lemons, coriander, rooibos tea, and beets.

Gastropod was where I went to be bewildered, and often moved, by creativity.

When Kukull and Morris closed Gastropod in 2015 to open the much larger and more ambitious Mollusk, they were filled with hope. They would be in the center of the city, not hidden away near kitchen-supply stores. Morris would brew beer in a higher-volume, state-of-the art digital system, and Kukull, who had been cooking with just a few butane burners and a convection oven, would have a full kitchen with eight burners, a grill, and a deep fryer.

Even before its opening, Mollusk was enthusiastically reported on by food news site Eater Seattle. After a few months, it received a favorable review in the Seattle Times. Kukull and Morris were prepared to be busy all the time. "What I wasn't prepared for was to be dumping money out the window," Kukull said.

He laughed and then grew quiet. He looked me straight in the eye as he told me he was laughing only because he couldn't think of any other way to get through what was happening.

Mollusk is on Dexter Avenue, currently full of backhoes, jackhammers, orange construction signs, and congested traffic. It's located in the True North building, "the only apartment community in Seattle with a bouldering wall." Across the street is the newly opened Juxt, where a 496-square-foot studio costs $1,815 a month.

Through an event Mollusk has been doing at Juxt, Kukull has met some of its residents, most of whom are recent college graduates renting their first apartments.

"While there are a lot of people coming into this neighborhood, they need time to develop a sense of safety, of wanting to go out, being part of a culture, and helping create that culture," Kukull says. "But right now, they're not sure what they should do."

Kukull tells me that when his mother-in-law ate dinner at Mollusk a few months ago, she saw a Pizza Hut delivery vehicle pull up to Juxt eight times.

"They've got these great communal areas with flat-screen televisions and pool tables," he said. "Why would you ever need to go out?"

Morris says that, while overall business has been slower than he'd like, Mollusk's bar and beer service have been successful. It's "a little easier" with beer—it's already brewed, and customers can sample different beers until they find one that they like.

If a more traditional menu helps keep Mollusk afloat and allows Morris to continue brewing his inspired beers, I'll take it. We need to support Seattle's culinary creativity however we can.

As for Kukull, he's spending the summer cooking in Alaska and will return to Seattle in the fall. He's not sure what he'll do next, but he retains the rights to the Gastropod name.

"I'm proud of what I've done. I owned one of the greatest little cult restaurants in Seattle," Kukull said. "If I could find someone who wants to invest in me, in the right neighborhood with the right food traffic, I'd open it up again."

Comments 14
Tags: Food & Drink
The Stranger depends on your continuing support to provide articles like this one. In return, we pledge our ongoing commitment to truthful, progressive journalism and serving our community. So if you’re able, please consider a small recurring contribution. Thank you—you are appreciated!
CONTRIBUTE NOW