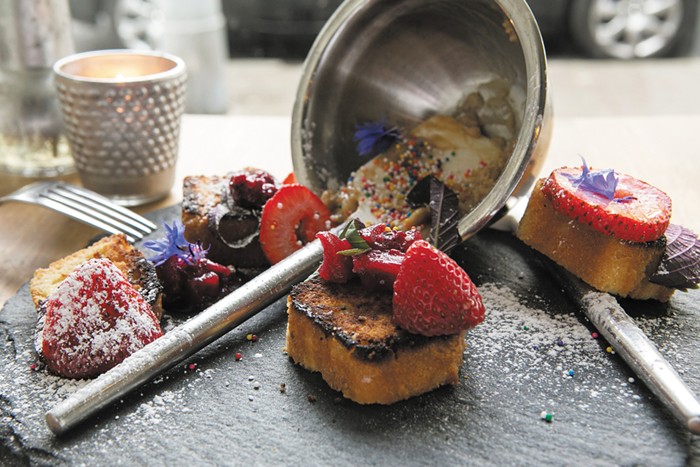 Eden Hill: Lick the Bowl is a dessert that looks like a party gone awry. JENNIFER RICHARD

On the top of Queen Anne sits a small restaurant called Eden Hill—so small that walking through the front door, you find yourself squarely in the middle of its intimate 18-seat dining room, which is almost always full. (Reservations here are highly recommended.) When you sit down for dinner, your server will tell you that you have two choices: pick a few dishes to share from the short menu of smallish plates or opt for the five-course chef's blind tasting menu, which changes daily and consists of entirely different dishes.

On a recent evening, I came in and stood for a minute amid people oohing and aahing over their plates of elaborately composed food. The majority of them had opted for chef Maximillian Petty's blind tasting menu—something that both surprised and impressed me.

Petty's tasting menu costs $90 per person (with an optional wine pairing available for $40), while à la carte dishes cost an average of $16. That the restaurant was filled with several tables of customers forking over substantial amounts of money for a prix fixe meal that lasts more than two hours (on a Tuesday night, no less) shows that Petty, who opened Eden Hill last September, has established a relationship of real trust with his neighborhood clientele. They're not only willing to eat whatever the chef wants to feed them but also willing to take a chance on the gels, foams, creams, and other conceptual elements of his self-described "avant garde, New American" cuisine.

Whichever dining experience you choose, Petty's reverence for his ingredients (many local and seasonal, of course) will be on full display, as well as his playful imagination. He is a chef with a lot of ideas and techniques, and he cooks as though he has a mandate to use all of them.

A tasting menu in late June began with an amuse-bouche of two smelt—oily little fishes that were lightly fried and crispy. They tasted great dipped in a creamy aioli, but were even better when dabbed with an acidic malt vinegar fluid gel—part liquid, part solid, wholly intriguing. Each smelt acted as both fish and chip, and each vanished in just two quick and satisfying bites.

Another course—pasta bathed in an ultra-rich, funky taleggio cream sauce—held a masterful surprise: the noodles were actually made from thinly sliced pig skin that Petty had cured for more than a day. They were soft and chewy, and, when coated in the delicious, complex molten cheese sauce, became even more slippery and pleasurable to eat. The dish was wonderfully lush and indulgent but needed neither the shavings of black truffle nor the edible gold leaf that were laid on top of the bowl. Both seemed to exist mainly so our server could describe the dish as being "totally baller."

Other courses on the blind tasting menu were less successful. A Dungeness crab salad that involved layers of ancho chili liqueur and coconut-and-corn cream suspended over a glass filled with herbs and smoke (it was meant to "scent the dish," our server told us) was overcomplicated, strange, and fussy—a trick that fell flat. Seared arctic char, despite its accompanying octopus broth and lovely magenta dianthus flowers, wasn't very interesting, nor was an Anderson Ranch lamb chop served on a plate painstakingly dotted with goat yogurt, sour cherry gastrique, pickled onions, fermented cabbage, nasturtium powder, microgreens, and flowers. Despite the ornamentation on both plates, the main proteins, while flawlessly cooked, were straightforward and safe.

A meal put together from à la carte menu items was much stronger—every plate complex but also well conceived and thought out. Garnishes were essential, not extraneous.

Florets of cauliflower "chilaquiles" ($13), meaty and encased in a crackly crust, were dressed in a vibrant and piquant jalapeño and chive blossom hot sauce. Underneath, fermented red cabbage gave both tang and earthy crunch, while clouds of a manchego foam, nutty and sharp, added an ethereal texture. Charred octopus ($21) was expertly cooked, supple all the way down to the tiny curlicue at the end of the tentacle. Its crispy exterior was matched perfectly by a crunchy exterior of accompanying sunchokes, which were sweet and creamy on the inside. Pickled black currants, served whole as well as part of a sweet-and-sour sauce on the bottom of the plate, gave zest and brightness. And grilled leaves of goose tongue grass, an ingredient I've never had before, were astonishing: naturally salty, smoky, and buttery.

While perusing the desserts, I noticed that a version of the lovely dessert we were served two weeks earlier as part of our blind dinner—alder-smoked apricots, tart and musky, with pistachio cream, white chocolate bark, and vanilla "bubbles"—had found a home on the à la carte menu. We were told the dish was the chef's attempt at re-creating an Italian soda he had enjoyed earlier that week. The newer, more refined iteration is made with grilled stone fruits, pistachio and rose-hip cream, roasted white chocolate, and ginger-and-vanilla bubbles. Perhaps Petty uses the tasting menu as his place to experiment and test out ideas.

Eden Hill's signature dessert, called Lick the Bowl, is a somewhat ridiculous looking dish I've seen all over Instagram and Yelp for the last year. A foie gras "cake batter," salty and unctuous, is served in a miniature silver mixing bowl that's turned on its side. The batter spills out onto a heavy stone platter that holds slices of buttery griddled pound cake and fresh berries, all covered in a riot of powdered sugar and bright multicolored sprinkles. The scene looks like a party gone sloppily, delightfully awry. (If you're too shy to get the last bits of batter out with your finger, you can use one of the spatulas it's served with.)

To be honest, I wasn't crazy about the dessert—the batter was more slimy than creamy—but as I licked sticky bits of the stuff off my fingers, I couldn't help but laugh in appreciation of what I'd been reduced to. I was, in fact, licking the bowl—and my fingers, as well as my forearms, which were dusted with powdered sugar. I imagined the satisfaction the front- and back-of-house staff might feel as they watch countless diners, here for a formal meal, doing the same humbling things at the end of each meal.

Owning and running a restaurant is a daily grind. While Petty takes his food very seriously (and, perhaps, some of it too seriously), it's clear that what drives him is a sense of wonder and fun. He's a young chef who, within a year of owning his first restaurant, was named a semifinalist for the Rising Star Chef of the Year award by the James Beard Foundation. The most interesting thing about Eden Hill will be watching how all that imagination and talent matures and evolves.