JarrBar Is Small, but Its Ambitions Are Big

The Preserved Seafood Is a Preview of Jarr & Co., Which Will Open in Pike Place Market Next Summer 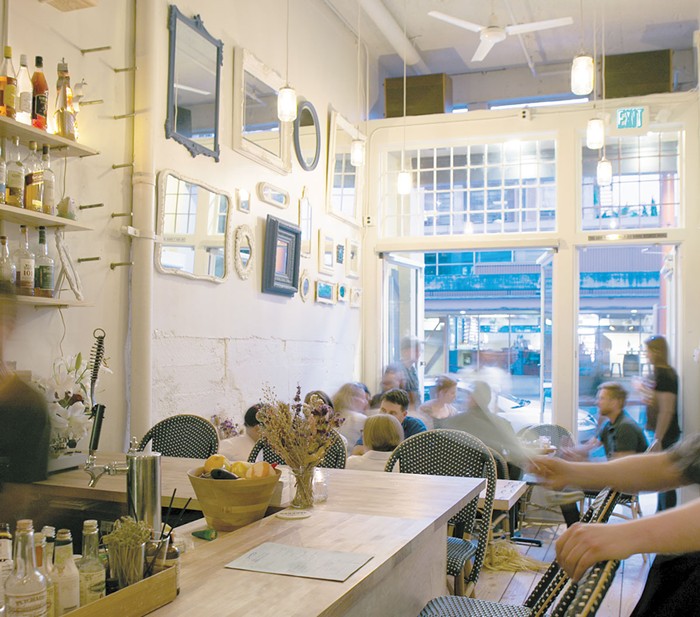 As the sun slips behind the Olympic Mountains each day, it casts a magical light that gives everything an otherworldly glow. The hours between day and night are the perfect time to make your way through Pike Place Market's cobblestone alleys and down its creaky wooden hallways toward JarrBar, where you can while away a few pleasant hours with food and drinks.

JarrBar, from owner Bryan Jarr (who, along with chef Cormac Mahoney, co-owned the much lauded but sadly short-lived Madison Park Conservatory from 2010 to 2014), sits on Western Avenue, beneath the market. Housed in a narrow space that used to be a storage closet, JarrBar feels a bit like a box, but a wonderfully cozy one. It opens at 4 p.m. every day, just in time to allow western light in, bathing the blond wood bar and tables in sunshine.

JarrBar opens at a time when many office workers are eager to get out of work but not quite ready to head home. It stops serving food and drinks at 2 a.m., late enough to be a place where restaurant industry workers can find similar respite between work and home.

"It's in the market but off the beaten path," said Jarr. "It's tiny, so it can only fit so many people, and narrow. But it has high ceilings and that European feel—as though people live above the little doorway. It's casual and neighborhoody, like the taverns or pubs throughout Spain and Southern Europe."

Jarr's vision was a place where "you can meet a few friends after work, share a couple of little things, have a few glasses of wine." The wine is mostly Spanish and reasonably priced; house cocktails are flavorful and use a nice variety of spirits. The space can't accommodate a full kitchen or hood system, which is just fine with him, since his plan was to offer bar food that was "different than the stuff that's cooked in fryers."

The food at JarrBar is of the Spanish grazing variety—olives, pickles, and almonds, as well as cans of imported seafood such as tuna, mussels, and sardines. Plates piled with cured meats, including slices of a handsome jamón ibérico that sits at the end of the bar as though it's a regular customer, and cheese are also served. It's easy enough to get sated here, but it would be unfair to come to JarrBar expecting a traditional dinner. Think of it as a place to get a small in-between meal, one that you piece together from a menu divided under four simple headings: "Jars," "Tins," "Plates," and "Cheese & Dessert."

A jar filled with pale-green preserved fruits—pipparas and olives—was a harbinger of what to expect. The long, slender peppers were vinegary and mildly spicy, while the soft-fleshed olives were briny and stuffed with minced anchovies. They were by turns tangy, salty, buttery, and fishy—all the flavors you can experience on JarrBar's menu presented in an unassuming glass vessel. King salmon rillettes ($12), one of just a few items made in-house, were fantastic. The fish had been lightly smoked, its pink flesh packed with butter into another glass jar. It was ultra-rich, soft, and creamy, but perked up by just the right amount of lemon and chives.

You might think it hard to muster a lot of enthusiasm for the menu, which mostly consists of items whose preparation requires little more than opening a can. But doing that dismisses the tremendous labor and care that went into the food long before it arrived at your table. Jarr, who traveled and studied seafood preservation through Spain and Portugal after closing Madison Park Conservatory, sources canned seafood (sardines, tuna, cockles, and more) from purveyors who use traditional line-and-hook or net fishing methods. Most clean and prepare their harvests by hand. You can taste the difference.

Chipirones ($14), small whole squid, their tentacles tucked sweetly into their bodies, are packed in their own black ink, allowing them to achieve another level of natural, subtle salinity. They are pleasantly chewy and oceanic, and taste as though the tin had been opened to reveal not a cramped metal space but the depths of the sea. Tuna belly, called ventresca ($18), is tender and velvety, even more luxurious as it bathes in a viscous olive oil that slicks your tongue, lips, fingers, and plate in its pale yellow richness.

Sturdy slices of purple-skinned octopus ($14) were muscular and lean, and tasted even better with just a dab of the lush aioli it was served with. Mussels ($9)—plump, meaty, and a creamy pale orange—are another excellent choice. They are packed not just in oil, but also vinegar, giving much-needed brightness and acidity.

All the tinned foods are served on wooden boards with a few simple accompaniments: wedges of lemon, and tiny stacks of sea salt and red espelette pepper, which is less spicy than it is sweet and floral. Spend an extra five dollars for little bowls of three sauces: house-made salsa verde, loaded with fresh parsley and garlic; house-made romesco, red, smoky, and studded with hazelnuts; and a complex, spiced harissa paste that you can use to add a dose of heat. Part of the pleasure of eating is customizing each bite and experiencing something new—how just a few flakes of salt or bit of green herbs can amplify flavors, how some things taste best plain and unadorned.

A Seattle native who also worked on a cookbook with the folks behind the Pike Place Fish Market (the ones who throw the fish in front of tourists), Jarr returned from his European travels inspired to apply traditional artisan preservation methods to Northwest seafood. Next year, he'll open Jarr & Co. in the Pike Place MarketFront, the Western Avenue expansion of the market that's currently under construction. When it opens next summer, Pike Place MarketFront will include a public plaza, farm and craft stalls, low-income senior housing, and several food businesses. Jarr & Co. will be a restaurant and bar, but like Beecher's Cheese, it will also be a retail space where the public can see the production process behind curing and preserving seafood.

Chef Zoi Antonitsas will lead the project. She and Jarr worked together at Madison Park Conservatory and have remained close. Antonitsas, who received national recognition at Westward and currently cooks at Omega Ouzeri, is particularly gifted when it comes to working with seafood and Mediterranean flavors. "It only made sense to bring Zoi on and have her take control," Jarr said.

"We're going to do things outside of the usual salmon, oysters, and tuna," he added. "Cockles, butter clams, manila clams, mussels, mackerel, black cod, and spot prawns. We're going to do a whole run. In Europe, there's a long history of eating like this, but that hasn't been the case in America."

JarrBar, as it turns out, is a testing ground for Jarr & Co., a fantastic idea that, miraculously, hasn't been done here before. "One of the purposes was to start to introduce the products from Spain and Portugal in this format," said Jarr. "Before the big undertaking and investment, JarrBar was a safe, easy way to see if people even like this stuff. And it's been awesome. It's exceeded my expectations."