The City's Best Sushi Is in Ravenna

The Restaurant Is Called Wataru. It's in the Same Building as Salare. Lucky Ravenna. 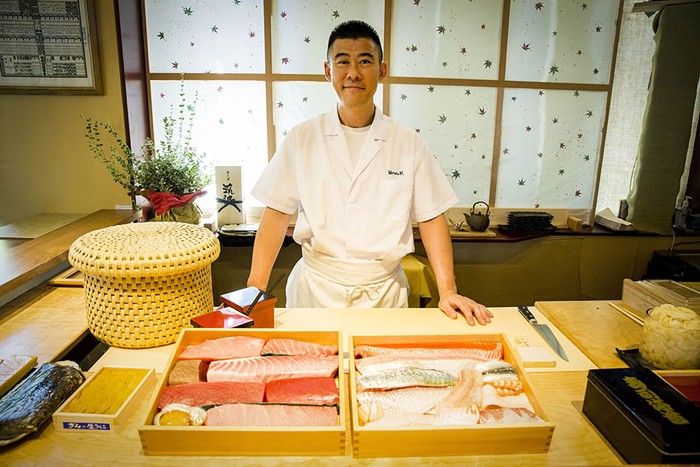 This sounds weird, but halfway through my omakase meal at Wataru, as I was savoring a piece of local geoduck, a few lines from Henry David Thoreau's Walden popped into my mind. (It was certainly weird to me, as I haven't considered the words much since I read them in high school.) As I watched chef and owner Kotaro Kumita work diligently behind his sushi bar made of gorgeous slabs of live-edge elm, Thoreau's words colored my view: "If a man does not keep pace with his companions, perhaps it is because he hears a different drummer. Let him step to the music which he hears, however measured or far away."

Given Seattle diners' worship of all things local and seasonal, another chef might have simply placed a piece of the geoduck, which had arrived fresh from Camano Island that day, atop a bed of rice, and considered that enough. And it might very well have been. But Kumita chose to manipulate it—subtly, masterfully—through his knife work. He scored it diagonally in opposite directions, then plied it open to reveal dozens of tiny, glistening white diamonds.

Not actual diamonds, but the tough and crunchy insides of a geoduck. By slicing with such precision, Kumita actually turned its texture into a great asset. It was a pleasure to feel each little nub of flesh on the tongue, and because it was easier to chew, I was able to focus instead on its wonderful sweetness.

The first piece of sushi Kumita had served that night was a creamy, dulcet scallop from the waters of Hokkaido, Japan. While the chef has obvious reverence for his ingredients, the way he handled the scallop initially struck me as somewhat aggressive. Holding it in one hand, he brushed it repeatedly with half a lemon that he gripped tightly in the other. Just before placing the scallop on the tray in front of me, he carefully sprinkled it with rough flakes of sea salt—"from Okinawa," he said proudly.

I've eaten countless pieces of scallop nigiri, but this one tasted entirely new. First, a fat crystal of salt landed on my tongue and I felt it fizzle away under the bright acidity of the lemon juice. My palate was fully awakened and now able to appreciate the rich scallop, which had already been treated with the flavors that had just flashed across my tongue. What Kumita had quietly done was the equivalent of lighting a firework to begin the meal. He had my full attention, and I knew what was coming next would be dazzling and fun.

There were plenty of wonderful courses of pristine fish, each of them anointed with nothing but a few brushes of Kumita's own lightly seasoned nikiri soy sauce and a dab of wasabi. They included yellowtail, shima-aji (oily, luscious horse mackerel), amberjack, yellow jack, meaty bigeye tuna, and gooey uni from Hokkaido. A hand roll made from buttery Alaskan king crab and a single leaf of shiso, its flavor bracing and mint-like, also sang out clearly.

But whenever Kumita made the choice to slightly alter the texture and flavor of his fish, that is when I noticed his deft use of technique, his gift for following his own rhythm.

Kumita ever-so-briefly smokes black sea bream over hay, imbuing its firm, white flesh with dark, fleeting notes. He uses the same technique to treat king mackerel, this time smoking it for three minutes, as its strong, oily flavor can withstand the smoldering. For bluefin tuna, ruby jewel-toned fish that almost seems like steak, Kumita lightly torches it with a flame and douses it with a citrusy ponzu sauce, which simultaneously deepens and lightens its taste.

With flounder, the chef employs a method called kobu-jime, wrapping it in kelp and letting it cure, which gives the mild-flavored and delicately textured fish both a boost of salinity and satisfying firmness. He uses another technique, called zuke, to treat local albacore tuna as well as medium fatty tuna, called chu-toro. First, he blanches the fish for a few seconds in boiling water. After it cools, he places it in a marinade of soy and sake. The cooked outer surfaces absorb the flavors, while the interior remains raw and pure.

Both kobu-jime and zuke are classic techniques of Edomae sushi, which Kumita specializes in. The name—which combines "Edo," the former name of the city of Tokyo, and "mae," meaning front—references the traditional act of serving local fish caught from the waters of Tokyo Bay. This was before refrigeration, when techniques such as curing and marinating were used to slow down the spoiling and deterioration of fish. The methods are no longer necessary and rarely seen in popular sushi restaurants here, but Kumita uses them nonetheless. Wataru is Kumita's first restaurant. His actions here are a nod to a faraway tradition, as well as a step in his own direction.

Last November, Seattleites rightfully talked incessantly about Sushi Kashiba, the new restaurant from legendary local chef Shiro Kashiba. But we talked significantly less about Wataru, which Kumita opened just three weeks prior to Sushi Kashiba's opening. Kumita apprenticed under Kashiba both in the late 1990s and as recently as 2014 (he spent the years in between studying his craft in Japan, then working at other Seattle restaurants including Moshi Moshi and Kisaku).

Shiro Kashiba opened his spacious restaurant and bar in Pike Place Market, an iconic location in the center of Seattle. His protégé went a decidedly different route, opening his small restaurant, formerly home to a Garlic Jim's pizzeria, in the residential neighborhood of Ravenna. Wataru's next-door neighbor is Salare, where chef Edouardo Jordan also draws from culinary tradition but follows a vision that is entirely his own. It might be the most exciting restaurant corner in the city.