What Can You Do to Broaden Your Worldview? Have Dinner with Your Muslim Neighbor

With Courageousness and Humility, Amanda Saab and Her Husband Are Changing the Conversation About Islam 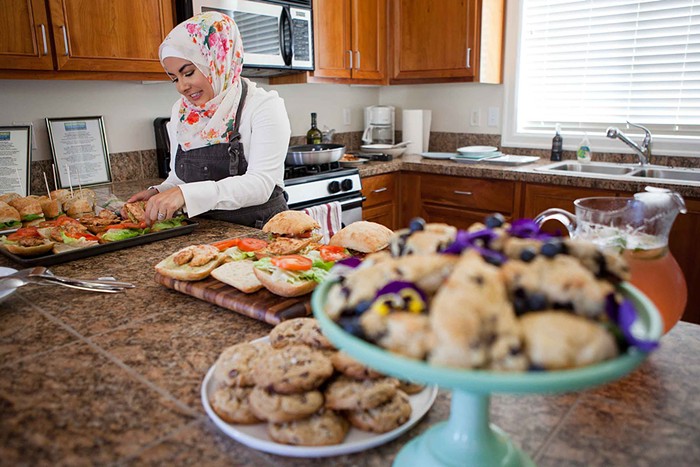 "Everything you probably think about me is false," says Amanda Saab, when asked what she'd most like to tell the public. The Renton social worker, MasterChef contestant, and food blogger sees the stares she gets on the street and hears from haters through social media. Rather than having people fixate on her hijab and imagine what Islam means to her, she wants them to ask her about it.

So Saab created a safe, inviting space for people to do just that: Dinner with Your Muslim Neighbor.

When Saab and her husband, Hussein, moved to Seattle almost five years ago, she brought a Midwestern accent full of flat vowels and a naïveté about being Muslim in the Northwest. Growing up in diverse Dearborn, Michigan, where her extended family of more than 50 people still gathers every weekend, Saab hadn't thought about what wearing a head scarf in Seattle would be like. Her first reaction was surprise: "Whoa, there are a lot of white people here." She felt she stood out—and not in a good way. She could sense the stares fixated on her hijab as she walked down the street. "I felt so 'other-ized'!"

But Saab got into social work for a reason: She likes to figure out how to fix things. One night, watching Donald Trump spew vitriol from the television, she felt a wave of emotion. She asked herself what she was doing, why was she just sitting there, letting it happen, when she could do something. So she and Hussein hatched the idea of Dinner with Your Muslim Neighbor and started planning right away, beginning by putting out an invitation to Saab's nearly 9,000 Facebook followers. More than 200 people responded. They were on to something.

For many people, this method of invitation might yield only people who already know about you and your faith, but Saab's food blog and MasterChef appearance brought in a diverse group. Like so many others, Saab began her food blog, Amanda's Plate, as a hobby to take her mind off work and share her recipes with friends. Less than a year into it, on a whim, she tried out for MasterChef. Through the 10-plus rounds of auditions, she thought little of her head scarf: To her, it's a part of her everyday outfit. Now, looking back at the questions the producers asked, she admits it might have been part of their motivation in bringing her on. But to her, it was all about the cooking—at least until the show aired.

"I didn't realize how impactful it would be for a Muslim woman who wears the hijab to just do what she loves." As soon as it aired, she started to receive excited e-mails and calls for interviews—as well as the inevitable negative comments. "Let's hope her hijab doesn't light on fire," one woman tweeted sarcastically while Saab cooked, before implying that, also, if it did, we should be concerned about "her intentions."

Those "intentions" that so many Americans assume of Muslims are part of why the Saabs began the dinners. At a recent one, a Maple Valley woman who had heard about the meal after her pastor had attended one, asked how she should respond to her neighbor who told her: "Be very careful. If you say the wrong thing, you'll go on a hit list."

Much fear comes from ignorance, Hussein responded. And it's true: Sitting in the sunny cabana of the Saabs' Renton housing complex, eating a refreshingly parsley-heavy tabbouleh salad, tender chicken sandwiches, and a fig cake with goat-cheese icing that was both more beautiful and better-tasting than anything any bakery in town sells, it was hard to imagine someone capable of accusing the Saabs of malicious thoughts.

He suggested that the woman ask the neighbor if she's met a Muslim and to talk about the many facets of Islam. He offered resources for online information, like IslamFactCheck.org. Another participant expanded the question by asking how people can best be an ally. Hussein encouraged everyone to challenge assumptions, which led into the Saabs telling their stories of how they came to Islam—incidentally, by asking questions and challenging assumptions.

Growing up in a fairly lax Muslim family, most of the women in Amanda Saab's life—her mother, sisters, and cousins—didn't wear a hijab. After exploring her faith by attending church with her Catholic best friend, talking to a Buddhist classmate, and asking questions about what Islam was, Saab made the decision at 16 to wear it. Like any parents whose teenager makes a big decision, Saab's parents were concerned but allowed her to make her own choice. It wasn't an uncommon sight at her school, though her Spanish teacher thought she was a new student and a friend exclaimed, "But you had such great hair." (I still have great hair, Saab reminded her.)

Her husband's story is similar. "We found our faith; we didn't inherit it," he explains.

Saab admits that one of the most nerve-racking parts of running these dinners is that she and her husband aren't experts in Islam, just practicing Muslims. But that's some of what makes the pair so approachable: They come armed with relatable facts (did you know Jesus is mentioned in the Koran more than the prophet Muhammad?), but mostly they talk about their own experience rather than scholarly interpretations. Hussein is quick to tell the story of how they met (through mutual friends at a youth camp) and dispel any thoughts a diner might have about arranged marriages. Saab focuses on her feminism, especially in regard to the hijab.

"This is my feminist statement," Saab told the group, explaining her decision to reject Western beauty standards. Instead, she chooses to wear the symbol of her religion, which, she points out, has the second highest level of education for women in the United States. "I think women in America are oppressed," she continued, talking about inequality in pay and the current legislative battles over reproductive rights.

But it's a statement she wishes she didn't always have to make: "I don't want to be the token Muslim woman." One participant at the dinner suggested that it shouldn't be the duty of the oppressed to educate the oppressors, but Saab dismissed that, explaining that it is one of the pillars of Islam to stand up for all people and to advocate for any marginalized people. For her, that's why she does the dinners, supports the Black Lives Matter movement, and feels strongly about equality for LGBTQ people.

For all the success her dinner series has had, her next challenge is how to make this into a model for anyone to replicate. She directs hopeful hosts toward her website (amandasplate.com), where she's posted tips on creating your own dinner with your Muslim neighbor, and she will be partnering with Michael Hebb of Death Over Dinner to create a repeatable model.

The most important thing, Saab says, is to be okay with feeling vulnerable. In order to build relationships and create community, to try to educate away some of the hate in America, she has had to allow herself to be exposed: by wearing a hijab on television, by cooking for a room full of strangers, by answering every question. And so, she has one final piece of advice for everyone, for Muslims in America and for those who make assumptions about them: "It's okay to be challenged."

Washington Is Getting So Cheesy

At the Washington Artisan Cheesemakers Festival, You Can Build a Better Cheese Plate by Looking in Your Own Backyard