Karaoke with a Side of Fried Chicken 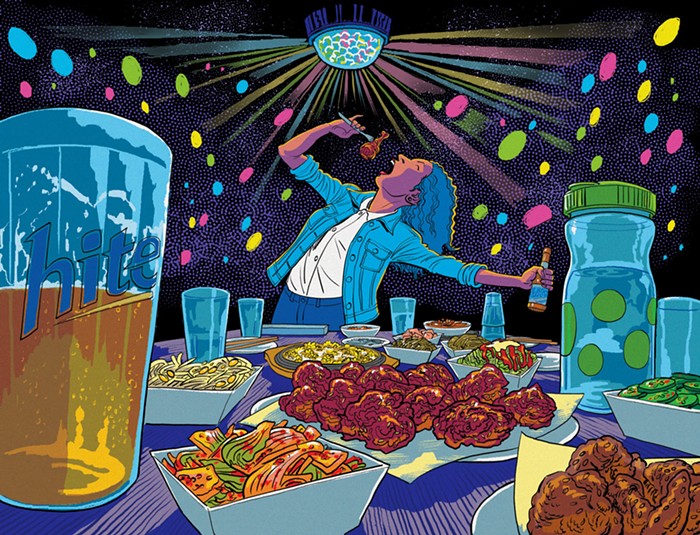 Taylor Swift never sounded better than when my friend Amanda sang "Shake It Off" with a microphone in one hand and a fork stabbed through a half-eaten nubbin of Korean fried chicken in the other. Partial credit goes to Amanda's amazing voice, but it was also the incredible setup at Stars in the Sky that made this happen. The Edmonds Korean restaurant lets you crunch chicken to the sound of your own crooning in its private karaoke rooms.

Koreans, it seems, have things figured out much better than the rest of us. The Korean spas I've visited serve food—so mid-steam, if you're feeling a bit peckish, you can don a robe and nibble on some bibimbap. If you're karaoke-ing, they know you should be able to order a sizzling platter of corn cheese (don't overthink it—it's literally just corn and melted mozzarella, and it is good in a way that only things thought up three joints into a night can be). I have to hazard a guess that the only thing keeping Stars in the Sky from being completely mobbed every night is the location: Yes, it's a ways out, but it's only 20 minutes from Ballard. I know it sounds scary, but it's a quick trip—and the place shares a parking lot with one of the area's best-kept secrets, Dumpling Generation. The yellow sign has no name on it, just a chicken, which, if you look closely, says "SiS."

About 10 tables and a short bar occupy the main room at Stars in the Sky, but turn the corner and a handful of red doors open into the karaoke rooms. Each one sports a flat-screen television, a few mics, a colorful disco-ball lighting system that turns on automatically when each song begins, and a large table with seats for 8 to 12 people. (Though I saw bigger groups pack in even more people, who spilled out into the hall along with the sweet strains of *NSYNC.)

As might be expected in a place where half your patrons are busy performing while you ask if they'd like another pitcher of Hite (Korean beer), the service is a smidge spotty—often requiring a poke of the head out the door—but overall, the staff is unbelievably friendly and accommodating. By the time our server dropped off the first drinks, we already had the tambourines (supplied by Stars) shaking to the first songs.

Eating dinner over karaoke makes for the occasional awkward moment—after all, nothing says appetizers quite like your buddy singing "Dick in a Box." But there is something of a pleasant casualness to passing around the mic while the aroma of fried-chicken exhaust wafts into the room. Within minutes, we got accustomed to the smell—and placed our own order.

A whole or half chicken, local and fresh, comes divided into a jigsaw puzzle of tiny pieces, each one thickly coated with the shatteringly crisp batter that forms a bready barrier between the moist meat within and the sweet and spicy sauces that drench it. The sauce options include sweet Asian garlic, sweet and spicy, honey butter garlic, honey soy, habanero sweet, and extra spicy. Beware the extra spicy: You will breathe fire as you tambourine along to "Sweet Caroline." Through some miracle of science and technique, the crust stays remarkably crunchy throughout an hours-long karaoke session, never sogging out halfway through Oasis's "Wonderwall" (unlike, say, the song itself).

The chicken, on its own, would be worth the drive to Edmonds (and, should you not feel up for karaoke, you can simply sit in the restaurant portion of Stars in the Sky and eat your fried poultry as if there were not rooms full of people warbling along to Journey just a thin wall away). It comes to the table with refreshing but unremarkable sides—like pickled daikon radish cubes and a bowl of shredded cabbage dressed with mayonnaise and ketchup. For food more up to the chicken's standard, order from the anju menu—a Korean term referring to foods served with alcohol. It includes the usual American drunk suspects, like cheesy fries, but also stir-fried or deep-fried chicken gizzards, which I can attest are excellent for sopping up booze, as well as sliced canned peaches, which I cannot—though I beg to be corrected. But the other specialty here is the rice cakes, available in a number of permutations, perhaps the best of which is the rabokki—rice cakes smothered in a rich, spicy sauce with fish cake over instant ramen noodles. And while that sounds like it was dreamed up after someone indulged in a few too many pitchers of the Stars in the Sky specialty cocktail (soju and your choice of options, such as sassy lemon, cutie yogurt, sexy peach, and pretty lemon), the chew of the rice cake and the hearty noodles, afloat in what tastes like kimchi, butter, and a dab of gochujang pepper sauce, powered us happily into our third hour of karaoke.

Hour three was when someone finally scored 100. Yes, karaoke at Stars in the Sky has a competitive edge. When a participant texted friends in Korea, we were assured this is common there. (Again, America, you're lagging behind. First you expect me to leave the spa to get spicy tofu soup, and now this?) After each song, the screen gave a score. It took us until that third hour to figure out just what the machine wanted (it gave a 35 to a gut-wrenching Sinead O'Connor performance and a 99 to an inarticulate shouting of Ricky Martin's "She Bangs"), but eventually Limp Bizkit's "Nookie" took the top score. Apparently, belching mid-song doesn't detract from the point total.

But alcohol-infused bodily functions affecting karaoke scores aside, the only real complaint I could lodge against a place that serves fried chicken to your private karaoke room is that the choice of songs in English was a bit slim—sadly my K-pop knowledge isn't up to par—and with almost no country (it's really not a karaoke night without a scream-along duet with my bestie to Alan Jackson's "Chattahoochee"). But I suppose if we want that, we need a place serving us Nashville hot chicken in a private room rather than Korean fried chicken. In the meantime, I'll be placing a standing Saturday night reservation before this review comes out, and all of you should try to join me at Stars in the Sky.

Stars in the Sky

What Does It Take to Be Seattle's Best Banh Mi?