The Romance of Chili Cheese Fries

The inexpensive, late-night, bad-for-us food my husband and I ate as we were falling in love. 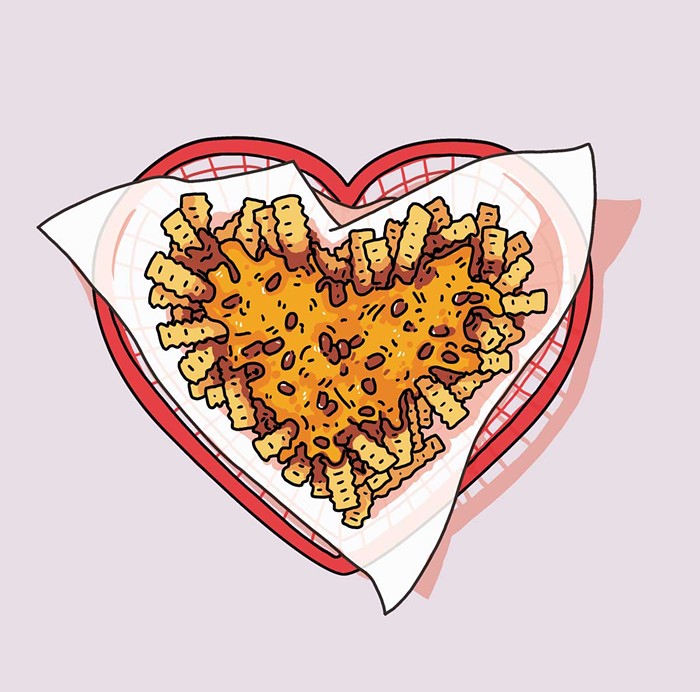 I knew I was in trouble on our third date, when, on our second round of beer and whiskeys at the Summit Public House, we decided to order a large pepperoni pie from Toscana Pizzeria next door. Over the next four hours of conversation, we polished off every bite. At 2 a.m., we stumbled home toward our apartments, clutching each other's hands instead of an oil-soaked take-out box.

When I summon memories of romantic meals, inevitably what I come back to are the ones I shared with my husband back when we were first dating. Even when I was tired and already tipsy, I stayed out and kept eating and drinking because that seemed like the best way to keep the night going. My desire for the most innocent and illicit thrill—our knees brushing under the bar—was insatiable and made my entire body tingle. So I'd order another round of drinks and something deep-fried that came in a basket and/or covered in melted cheese.

A lot has happened in the decade since. Right now, I'm 36 weeks pregnant with our second child. My uterus has grown exponentially, squishing my internal organs, including my stomach, which is currently able to accommodate only a small amount of food before giving me punishing heartburn. I look in the mirror and see a comically swollen balloon version of the young woman I was—50 pounds heavier and now with gray hair.

It's not just me that's changed, but the city, too. The Summit is still open, but Toscana Pizzeria has closed, replaced by a Moroccan restaurant, Itto's Tapas. (I take comfort in the fact that Itto's is run by the same owner, Khalid Agour, who made the change because he wanted to serve the Moroccan food he was raised on.)

When not eating greasy dive-bar food, we'd eat salt-and-pepper squid and Singapore noodles in the neon-lit windows of Sea Garden or Ga Ga Loc in the International District. Sea Garden was damaged by a fire in 2013 and never reopened. Ga Ga Loc closed and is now called Fortune Garden, which serves a lengthy, albeit different, menu of Cantonese food. Thankfully, you can still order the salty fish and chicken fried rice, the funky bits of pungent fermented fish begging to be washed down with a sweet Tsingtao. While our favorite seafood egg tofu dish is gone, we've found a decent substitute up the street at Harbor City (open until 11 p.m. seven days a week) in the form of braised enoki mushrooms, dried scallops, and silken egg tofu swimming in a rich brown sauce.

A few weeks ago, I got an urgent, late-night craving for chili cheese fries. I dispatched my husband to Slim's Last Chance and, while he was out, popped a Zantac to stave off any heartburn. He returned with a white take-out box filled with golden-brown fries doused in beefy Texas red chili and smothered in cheddar cheese. We sat on the floor of our living room, the box balanced on my belly, and devoured the fries in minutes, our 3-year-old sleeping peacefully, obliviously upstairs. I was sated and sober but somehow light-headed. Food will always give me a swoony, inexhaustible pleasure, but it's nothing compared to what I get when I'm with the one I love.