Why I'm a Regular at Suika and Tamari Bar

The two places on Pine Street that transport Seattle to Tokyo. 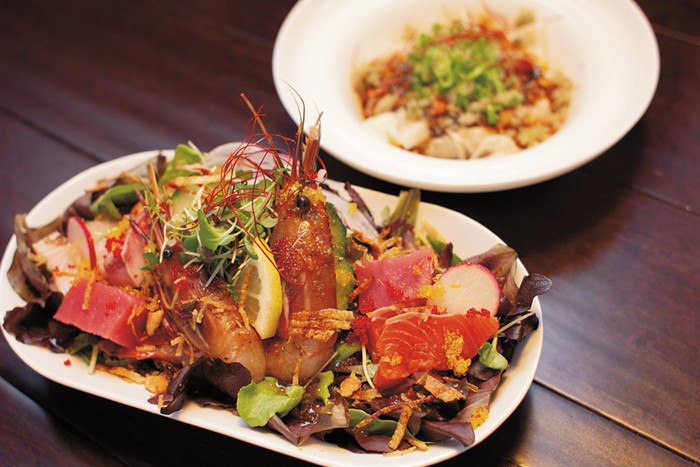 The server came by and asked if I wanted the shrimp’s head fried up. Yes! So good. Anthony Keo

Last week, I barhopped between two Japanese pubs in Tokyo, but it was really just two places on Pine Street.

Entering Suika, you're hit with an explosion of color and energy. Bartenders stick straws into wild watermelon cocktails. Servers mix bowls of pork-belly bibimbap for customers who don't know how to press the rice to the stone so that it forms an amazing crust. The whole staff stops midstream to welcome you with a shout—"Irasshaimase!"—before getting back to business. Muted anime brightens one wall, and a framed collection of vintage Nintendo games brightens another. The menu is extremely enthusiastic.

According to general manager Kan Terao, I've fallen right into his trap. "We're on Capitol Hill, but when a guest comes in, I want them to feel like they're in Japan. We want a really big vibe, full of energy," he said.

Terao also wants people to come in a couple times a week without thinking too hard about it. The fun interior and affordable menu invites that kind of patronage. Solo diners sit at the bar and eat warm bowls of stuff while looking at their phones. A big table in the middle of the restaurant accommodates larger parties. Friend dates and Tinder dates fill out the two-tops. (They've got mouthwash in the bathroom, if you need it.)

You can—as I have many times—drop $20 on a hearty bowl of spicy pork ramen and a vodka cocktail mixed with aloe water and leave fulfilled and delighted. Or you can bring a friend and buy the relatively cheap omakase (for two) meal, and let sushi chef Sumitada Yamagiwa feed you whatever he wants ($25 per person).

A friend and I ordered the omakase last week, and the five-course Japanese/Korean fusion meal included cucumber kimchi and edamame, a 15-piece sashimi plate of fish, chicken wings, and a big bowl of creamy udon with cod roe. The chef capped off the light but satisfying meal with an uni shooter, and I felt like a delicate Gaston.

I cannot stress enough how good those chicken wings are. The sauce is made from yuzu and two kinds of miso, a combination that tricks your brain into thinking you can eat 47 thousand chicken wings without injury.

Owner Makato Kimoto opened up another izakaya place called Tamari Bar right down the street from Suika last February. "It just happened that way," Kimoto said. "The space popped up, we got a good offer, so we thought we'd give it a try."

The two pubs serve similar fare, but they're different from each other in subtle ways. Tamari Bar is quieter, darker, and larger. Instead of projecting muted anime on the walls, they're projecting muted Sofia Coppola films. (I'll let you guess which one.) With a much wider selection of sake and beer, plus a menu featuring a lot more fried items, they cater to more of a late-night crowd.

I gobbled up the kimchi okonomiyaki ($7) with a happy hour sake ($6). And after I finished my aburi hamachi carpaccio—a mix of raw shrimp, chopped fish, and greens ($12)—my server asked if I wanted my shrimp head fried up and brought back to the table. I most certainly did. The head was crunchy, salty, and heavy with fishy savoriness. I highly recommend it.