Make your first meal of the day a great one. Reader's Choice winner included. 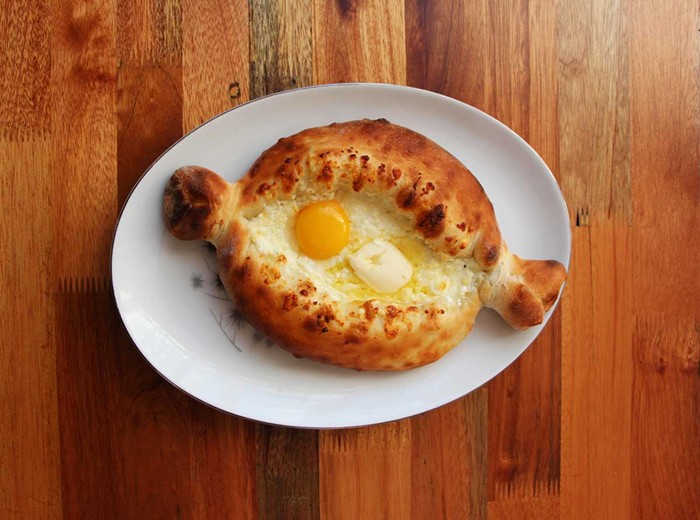 In a tiny nook around the corner from the excellent Analog Coffee, you'll find Analog's sibling, B-Side: your new favorite brunch spot, tiled in a Chiclet-pastel palette with a menu scrawled on a chalkboard. The egg sandwich with a slice of Beecher's Flagship cheese and daikon pickles, the veggie toast piled high with beets and fermented carrots, the rice bowl with house-pickled vegetables and a soft-boiled egg: You can't go wrong. But whatever you do, don't miss the life-giving sweet toast with Sea Wolf Bakers bread, which changes seasonally. One version in spring, with honey labneh, elderflower rhubarb jam, crumble topping, and fresh mint, evoked memories of my childhood garden. A fall variation, with peanut butter labneh, Concord grape coulis, chopped pickled apple, fresh banana slices, and crunchy banana crumble, somehow managed to taste more like PB&J than an actual PB&J. JULIANNE BELL

There are many reasons to choose the industrial-chic Portage Bay Cafe as one of your go-to brunch spots, but among the most alluring draws of this small Seattle chain of brunch and lunch joints is a menu of dishes made with local, organic, sustainable fare. Also, the variety of options that pair well with the cafe's breakfast bar of fruit, nuts, and whipped cream—buckwheat pancakes, vegan banana pancakes, and generous hunks of French toast made with Portage Bay's own GF bread included. Other showstoppers: the Dungeness crab cakes and carnitas Benedict, the latter served with braised Carlton Farms pork shoulder; the goat cheese omelet; and the breakfast sandwich (two organic scrambled eggs, Hill's pepper bacon, house-made bourbon fig jam, arugula, Mt. Townsend Creamery new moon jack cheese, all on house-made potato bread, or GF bread for an extra $2). LEILANI POLK

In the space of the recently closed Saint (you know, the triangular building that was painted turquoise, then fuchsia), the team behind Independent Pizzeria has opened Dacha Diner, an airy, light-filled restaurant serving comforting Eastern European and Jewish cuisine. That means delicate blintzes filled with farmer's cheese, platefuls of crispy latkes, borscht, matzo ball soup, and more. If you're looking to up your yolk porn quotient on Instagram, order the khachapuri—a Georgian specialty consisting of a boat-like bread brimming with fluffy cheese and butter and a runny egg that you mix into it with a fork, then tear apart with your hands and devour. JULIANNE BELL

On the sleepy main stretch of Madrona is this neighborhood standby that's been serving breakfast and lunch from a cozy house converted into a cafe for going on 30 years now. The "downstairs" area features a coffee bar where you can get a Fonté latte to go, or enjoy a Morning Glory chai and pastries while you wait on a table—because it's often bustling—until you're called upstairs to the quaint dining room area (or the sun-dappled, umbrella-shaded patio if the weather's nice). Everything is solid, from the three-egg omelets to the French brioche toast, though if you have the time (20 minutes), get the cheese baked eggs (two eggs baked in cream with Swiss, mozzarella and cheddar cheeses). LEILANI POLK

Seattle chef Edouardo Jordan earned national buzz and a Best New Restaurant award for his Southern restaurant Junebaby in 2018, but his inventive Salare, for which he also won Best Chef: Northwest, is also worthy of fanfare (and is much easier to get a table at). Drawing influences from the American South, Africa, Europe, and the Caribbean Islands, the eclectic brunch menu manages to stun with unexpected dishes like feijoada (a Brazilian black bean stew), pork schnitzel with nettle verde and Hakurei turnips, and a meatloaf sandwich on brioche made with the Ethiopian spice berbere and a harissa barbecue sauce. JULIANNE BELL

With an expletive-peppered menu, a kitschy space blasting pop music, and a congenial staff, Biscuit Bitch embodies "head bitch in charge" Kimmie Spice's irreverent approach to Southern hospitality. (Seriously—it's not uncommon to be greeted with a jovial "What's up, bitch?") Spice started her business with the intention of thawing the Seattle freeze, and as you dig into comforting, down-home Southern fare, like the "Hot Mess Bitch" (fluffy biscuits and gravy, eggs, and garlic grits with a grilled Louisiana hot link and sliced jalapeños) or the "Bitchwitch" (a biscuit sandwich with egg, cheddar, and a choice of sausage, Spam, or bacon), you'll surely feel the chill of the city melting away. JULIANNE BELL

Often booked up with reservations weeks in advance for its coveted brunch, this sought-after European-inspired cafe in Belltown is most known for its take on the Dutch baby, a kind of puffy, rumpled pancake baked in a skillet, and a Seattle specialty. Theirs come in sweet options, like blueberry lemon ricotta and brown butter with roasted pineapple, and savory options, like broccoli, bacon, and Beecher's cheddar, and a popular version with duck confit and dried cherries. JULIANNE BELL

Columbia City's cool and quirky Americana comfort-food joint is so popular, you have to wait for your full party to arrive before they seat you so they can keep the steady stream of diners moving in and out at a reasonable pace. People rave about the decadent French toast (Texas toast soaked in an egg wash overnight, pan fried in butter to crunchy perfection, served with maple syrup and/or the fruity topping of the day), but other delicious offerings include Geraldine's Casserole (eggs, pork sausage, cream, hash browns, pepper jack and cheddar cheese layered and baked, and topped with house-made pico de gallo), corned beef hash (a pair of poached eggs served over a medley of corned beef, butternut squash, peppers, potato, onions and celery), and the sweet white corn, Havarti, and herb scramble. LEILANI POLK

This unassuming, rough-around-the-edges downtown diner with a stalwart staff offers time-honored American standards alongside popular Filipino, Hawaiian, and Chinese favorites. Where else can you eat biscuits and gravy with a side of longaniza or chicken-fried steak with an order of lumpia? The combo silog—with three lumpia, two longaniza sausages, a pork chop, two eggs, and garlic fried rice—is the most popular order, and it comes with an addictive fresh tomato salsa, made irresistible with MSG-laden Maggi seasoning sauce. But the pièce de résistance is the ube pancakes, available only on weekends: a stack of purple sweet potato pancakes draped in a deep, royal, Prince-worthy purple coconut-milk sauce I can honestly describe as "luscious." They'll attract stares from other patrons and leave your plate and napkins splattered like a toddler's finger painting. JULIANNE BELL

Even though Niche features a fully gluten-free menu that includes paleo and vegan options, it doesn't taste like anything's missing—and it's a culinary blessing for those of us with dietary restrictions. Niche is a breakfast and lunch joint that closes by 4 pm, and their specialties are house-made waffles and focaccia. The former are served as part of a breakfast plate or as a "waffle-ini" with sandwich-style fillings (the Nutella and banana is everything). The focaccia is used in most of Niche's panini, and the breakfast options (like the Green Egg n' Ham, and the Sweet n' Salty Grilled Cheese with bacon, cheddar, tomato, and house-made apple butter) are divine. They also have various Udi-bagel sammie options, as well as GF baked goods. LEILANI POLK

Opened by Gloreen Raineri in 1987, Glo's is simply a beloved, dependable, no-nonsense diner in a shoebox-sized space. They're most known for their signature eggs Benedict, served with inimitably crisp, golden hash browns (both enhanced with a dash of the Secret Aardvark hot sauce on the table), but there are also pancakes, waffles, French toast, sour-cream coffee cake (from Gloreen's original recipe), and other standard greasy-spoon fare. Be prepared to wait: There's always a line snaking down the street on weekends. They're also open late on the weekends (from midnight until 4 pm!) to sate your need for breakfast in the wee hours. JULIANNE BELL

Leilani was the managing editor at The Stranger beginning in January of 2017. In addition to her boring administrative duties, she sometimes got to write stuff. She’s also a Phishhead, and doesn’t give a shit what you think about that.

Julianne Bell is the food and drink calendar editor for Stranger EverOut and an appreciator of fine snack foods. She lives in Seattle with a cat named Rhubarb.
The Stranger depends on your continuing support to provide articles like this one. In return, we pledge our ongoing commitment to truthful, progressive journalism and serving our community. So if you’re able, please consider a small recurring contribution. Thank you—you are appreciated!
CONTRIBUTE NOW