The Meteoric Rise of Totchos 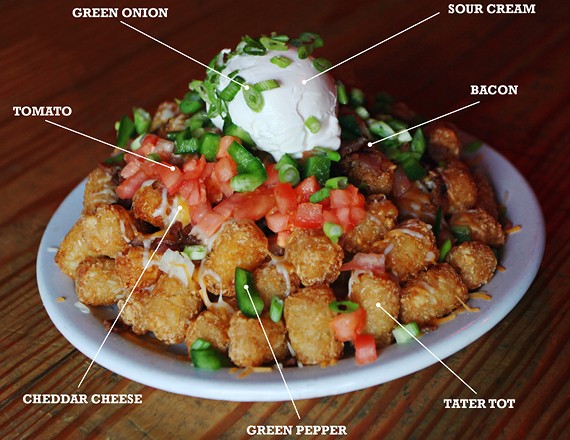 If you've heard of totchos, it was probably only in the past few months. If you haven't yet run across this modification of the classic nachos, using middle-school favorite tater tots in place of tortilla chips, you likely will soon. In the last six months, they've gone from slipping in at the occasional dive bar to showing up at every trendy spot in town.

Suddenly, it seems like totchos are everywhere, conquering menus with a furor usually reserved for kale salad, pork belly, and bacon-wrapped anything. Thinking perhaps it was just me, I checked in with the Seattle-based food website Allrecipes. Julie Mumford, who works on consumer insights for the site, not only affirmed a dramatic spike in searches for tater tot nachos in January, she noted that, so far in 2015, people in Seattle are twice as excited about totchos as the rest of the country.

Like so many cheesy, over-the-top dishes, totchos have roots in the dive bar, but now they are showing up on all kinds of menus: neo-diner Lost Lake Cafe (1505 10th Ave, 323-5678), sports bar Ballard Loft (5105 Ballard Ave NW, 420-2737), Georgetown dive Jules Maes Saloon (5919 Airport Way S, 957-7766), Maple Leaf beer specialist Cooper's Alehouse (8065 Lake City Way NE, 522-2923), burger outlet Lunchbox Laboratory (1253 Thomas St, 621-1090), and upscale cocktail bar Radiator Whiskey (94 Pike St, 467-4268). The black-bean-heavy version ($8) at Ballard's brand-new Hotel Albatross (2319 NW Market St) replaces cheese with a Texas-style white queso sauce—my least favorite version, as the tots soak up the sauce, leaving the dish dry and the flavor saved only by the pickled jalapeños on top. Meanwhile, the Tin Hat (512 NW 65th St, 782-2770) produced the best version, an intricate, multilayer orgy of cheese, bacon, onions, tomato, and sour cream. So while no two totchos around town are the same, the basic idea is tater tots layered with cheese (in whatever form) and salsa, as well as (possibly) beans, pulled pork, chili, and any other nachos topping you can think of.

J. Kenji López-Alt, who writes the Food Lab column on Serious Eats, spends a lot of his time figuring out how to perfect dishes like this. "There are some mash-ups so gut-wrenchingly glorious, so decadently delicious, so damn greasy that they deserve to be tasted, tested, improved, written about, modified, expanded, contracted, broken down, reassembled, broken down again, and possibly reassembled (after lunch) until they've finally emerged in their ultimate form," he wrote in a 2013 post. He considers totchos to be in this category. He also has some insight into what makes them so good: "Just like you can make or break a sandwich depending on how you stack it, proper layering is essential in constructing the perfect tray of totchos."

The Tin Hat has mastered the layering strategy with the "World Famous Flatliner" ($12). The enormous stack of tater tots—covered in bacon, peppers, tomatoes, onions, sour cream, and cheddar and jack cheese—creaks under its own weight. Through the miracle of strategic layering, though, the tots somehow stay crispy while the cheese doesn't congeal too much before you eat your way to the bottom of the pile. While the Tin Hat has been around since 1938, the tater tot introduction is recent: A decade ago, the Flatliner came on a bed of fries.

Tater tots weren't even invented when the Tin Hat first opened its doors, but Seattle's strange affinity for the potato-based snack makes sense once you learn its local origins. The tot was invented in Ontario, Oregon, in 1953, by Ore-Ida, as a way to use up the scraps left over from making french fries. According to Google Trends, the only state in which tater tot interest is higher than Washington is Idaho (way to buck the potato stereotype, neighbor!). The data site also shows that after staying fairly flat since 2004, tater tot searches began growing quickly in 2011 and have more than tripled since then. Perhaps that interest is spiking due to the introduction of totchos.

It's easy to see the appeal, looking through the thick layers of cheddar that top most versions of the dish: It's affordable, gluten-free (as long as the tater tots aren't deep-fried in oil where gluten-y items were), and indulgent. It harks back to childhood, with the base of nostalgia-inducing tater tots. They're crispy and melty, and if you don't agree that those are the two most appealing textures in bar food, it's probably been dry below that rock you're living under.

When chef Monica Dimas took over the kitchen in the back of the Mexican-inspired bar Nacho Borracho and created Neon Taco (209 Broadway E), she brought her own original menu full of authentic Mexican dishes. Except for the totchos ($9), which she left on the menu, next to her beef adobada and tacos de lengua. "They're kitschy, they fit in with the divey aesthetic of the bar," she said, laughing. She calls them über nachos and admits that she's had late-night cravings for them, which inspired her to keep them on the menu. They're best at 1 a.m., after a few drinks. "Tacos are great, but sometimes you just want heaviness when drunk," she said. Her version, though, is pared down.

For all their gooey indulgence, not everyone loves totchos. Aside from the usual complaints of heaviness and unhealthiness, spirits portfolio ambassador Rocky Yeh, whose job brings him to many Seattle bars on a daily basis, says, "Totchos change the nachos from a shareable group snack to a less social, knife-and-fork food."

Having tasted my way through handfuls of totchos for research purposes, I had other complaints about the dish—as Dimas said, "It's not a go-to dish," but something for every once in a while. As excited as I was by the idea of trying every kind of totchos in town, it turns out that the saying "too much of a good thing" has never been truer. Totchos, like so much else associated with excess, occupy a delicate balance between extravagance and absurdity. Even Dimas had to admit that, by nature, they're "more than what you need." Of course, that's also why totchos are great.