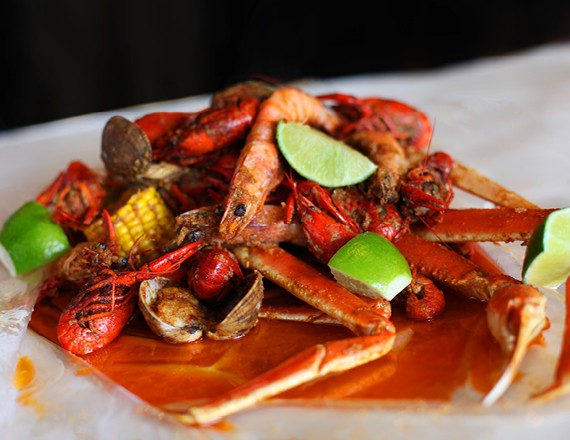 For those who love spicy food, Seattle can be a tough place to live. Perhaps it's the city's Scandinavian roots, or maybe the lack of diversity, but for whatever reason, it's very difficult to find a truly spicy dish. Sure, there are plenty of places where one can administer tongue-searing condiments: the salsas at El Paisano Rosticeria, the Senegalese pepper sauce at La Teranga, the zhug at Cafe Munir, the chili oil at Delancey. But getting a dish to come out of the kitchen with the kind of adrenaline-spiking, lip-burning, ear-ringing spice that my pepper-junkie taste buds crave? Not so easy.

For those who don't understand why someone might want to be in pain while they eat, let me explain. Or rather, let me allow a scientist to explain. In a 2010 article in the New York Times titled "A Perk of Our Evolution: Pleasure in Pain of Chilies," Dr. Paul Rozin posited the concept of "benign masochism," or the thrill that comes from your body thinking it's in trouble, but your mind knowing you are not. With that thought in mind, I started on my quest to find Seattle's best spicy dishes.

The rules I set, other than the constraints of time and budget, were that I must always ask for the spiciest dish. If there was an option for level of heat, I had to ask for the hottest, and I had to finish the dish.

My first stop was Pam's Kitchen (609 Eastlake Ave NE, 420-2320), which serves Trinidadian cuisine. A confused-looking counterman suggested the jerk chicken sandwich ($7.50). A few bites in, I understood the confusion. While I was hit by a giant wave of vibrant jerk sauce, spice wasn't even trying to dip a toe into the waters.

Off to a disappointing start, I next sidled up to the window at Pecos Pit (2260 First Ave S, 623-0629), a barbecue stand, to order a brisket sandwich hot and "spiked," meaning with an added split hot link ($10.35). It hit me with strong heat right away, though much of it in the form of black pepper, as opposed to the kind of searing capsaicin chili-heads crave. Even more disappointing, this spice was like the hare, not the tortoise: The burn slowed from its initial sprint until it barely limped across the finish line.

I gave up on sandwiches and started seeking out Thai food. At Thai Taste (601 Second Ave, 682-1817), a funny little restaurant tucked into a corner of Pioneer Square, I decided to investigate the space noodles ($10.90) because the menu very threateningly warns that there is a limit of one order per day. And while the spice was good, the flavor of the broth was murky and undefined. As I slurped the rice noodles, the burn was strong, and it crawled toward my nose. Relief came in the form of slices of hard-boiled egg, which were rich and bland and cut the heat. Nevertheless, the flavor just wasn't that good. I would rather have had nearly any bowl of pho in town.

I thought I'd have better luck at Thai Tom (4543 University Way NE, 548-9548) in the University District. While the waitress claimed stars were all that mattered, I took no chances and ordered the spicy broccoli—it was in the name—with all five stars ($10.95). While aggressively garlicky and brimming with wok hay (the beautiful "breath of the wok" that proper high-heat stir-frying achieves), the dish barely registered on the spice scale.

Giving up on Thai food, I scanned through Indian food options, getting decent heat from the Kerala lamb curry ($13.99) at Chili's South Indian Restaurant (5002 University Way NE, 412-0874) before moving on to Taiwanese food. I'd eaten at Boiling Point (610 Fifth Ave S, 737-8506) before and remembered the Taiwanese Spicy Pot (the only hot pot where you don't get to choose your spice level, as it only comes in "flamin' spicy") to be rather painful ($11.99). Perhaps my weeks of searching for the city's hottest foods had tamed my taste buds, or perhaps it was a different cook. Whatever it was, the dish—full of beef and mushrooms and squid in steaming broth—had none of the adrenaline-spiking heat for which I had hoped. While the temperature of the soup was so hot that it made the spice seem more intense, I never felt a capsaicin burn in my mouth. My lips tingled a bit at the end of the meal, but it quickly subsided. The heat I was seeking was not in this bowl. Or perhaps, not in a bowl at all.

It's hard to discuss spice in Seattle without the Wing Dome (7818 Greenwood Ave N, 706-4036)—and, specifically, its "7 Alarm" sauce—coming up. You order it by the wing ($1.99 each), while other dishes come in half-pound increments. It was by far the spiciest dish I had tasted thus far. It was also the worst tasting. While all of the other dishes, even the space noodles, at least seemed to aim for being delicious, this wing made no pretense: It existed to be spicy, not to be enjoyed. It came drenched in a gloppy tomato sauce, which, save for the spice, was surprisingly flavorless.

Trodding glumly home, I was concluding that Seattle didn't have any great spicy dishes. But then fate intervened, in the form of Crawfish House (9826 16th Ave SW, 588-1613). (Possible future memoir title: Guided by Crawfish.) I happened to be in White Center, and remembered that my food-loving (and knowledgeable) friend had recommended the place many times. The menu offered five-star options and then the magic words: They would prepare the pound of crawfish ($12.74) even spicier.

I asked the waiter for his spiciest. He said, "Two or three stars?" I laughed, pointing out that the menu said they go even higher than five. "How many do you want?" he challenged. "How high do you go?" I shot back. Ten, he said, sometimes 20. Twenty it was. He switched to some very formal language to make sure this was really what I wanted, and I wondered if this was a liability thing. I took him up on his suggestion of an order of French bread to cool off.

When my bag of mudbugs arrived (complete with plastic gloves to keep my hands clean and unscathed), the burn started slowly. I peeled tails and sucked heads, as I'd learned to do in New Orleans. Around my third head, I accidentally breathed in a bit and caught some spice in the back of my mouth. It hurt. I coughed and guzzled a giant cup of water. A few tails later, my upper lip and the entire space between my mouth and nose began to feel aflame. About halfway through, I had to stop and take a break.

For a few minutes, the pain continued to increase. I realized my bread never arrived, and I flagged a server. My throat began to get the dry itch that usually signifies the start of a sore throat. I sucked down ice water. The bread came. A waitress came to check on me and refill my ice water. As she did, tears randomly spouted from my eyes. They weren't tears of pain, but rather, I discovered, my body's involuntary reaction to this much spice. (Alternate memoir title: Crying Alone with Crawfish.) She looked at me with pity and offered to make me a less spicy batch, but at this point, I'd started to recover. I accepted a refill on ice water and dove back in.

For the second half, I decided to skip sucking the heads, which is essentially drinking pepper-and-garlic-spiked crustacean juice. I crushed through the remaining tails and polished off the corn and sausage. The cockiness that comes with success started to blind me (or was that the spice again?), and I decide to suck a few more heads.

I got through two more before I needed to patch my burns with French bread, applied as if it were aloe vera. I called for it. The waiter came over, and I tried to chat with him but discovered I'd developed a stutter, owing either to the burn that had now started moving about my face—seeming to have lodged under my right eyebrow at that moment—or to my mouth, now frozen shut with excessive ice water in attempts to cool down. He told me that a few other people have ordered 20 stars before. Vietnamese people, mostly, and often their lips swell up when they're eating it. As he walked away, I checked myself out in my cell phone camera. Other than a little redness where I'd wiped my nose with 12 napkins (I counted), I seemed okay.

In fact, I had a giant grin on my face. Crawfish House had finally given me what I wanted: a meal that would inflict pain and deliver flavor simultaneously. The spice was painfully strong, but not masochistically so—because it was equaled in pleasure in the form of tender meat, savory crawfish juice, and house-sauce spices. I'm excited to go back to Crawfish House the next time I need a good dose of burning—but maybe I'll tone it down to 10 stars.