What Is It Like Eating at Seattle's Most Exclusive Restaurant?

Behind the Curtain at Canlis 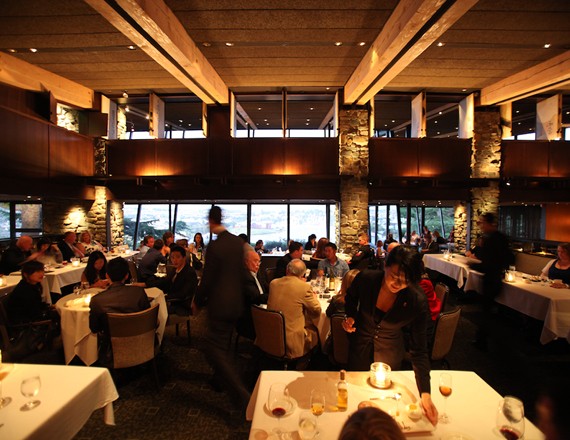 Like an opulent ship: Canlis is gorgeous and sleek, a mid-century-modern dream of clean lines and striking natural elements. Courtesy of Canlis
Tweet

Despite having lived in Seattle for 16 years, I have never eaten at Canlis, arguably the city's most iconic and revered (not to mention expensive) restaurant. Canlis has always seemed like it was for other people—people who drive luxury cars, not people, like me, who drive Toyota Corollas with tape decks. But there's no denying or escaping the restaurant's reputation and status. Canlis, founded in 1950, still routinely appears on "essential Seattle" and "best of" dining lists.

But in March, when the restaurant announced it had hired a new executive chef, I was intrigued. Brady Williams, just 28 years old, was most recently sous chef at Roberta's in Bushwick, Brooklyn, a wood-fired pizzeria made from cinder blocks and shipping containers that features an indoor garden and, oh, a 12-seat, two-Michelin-star restaurant called Blanca that serves a $195 tasting menu. Hiring Williams was a surprising move for a restaurant steeped in tradition, perhaps one reaching toward a different, younger audience.

"It's surprising only because he is so young," said Brian Canlis, grandson of the restaurant's founder, Peter Canlis, who runs the family business with his brother Mark. "He's a 28-year-old helming a 65-year-old ship. Canlis is like a 60-foot-long yacht cruising through the ocean. It's beautiful."

According to Brian Canlis, that yacht is more accessible than ever. "We fight this reputation that we are a crazy-expensive, old-people restaurant. That's not really the case," he said. "Here's the thing: Special and accessible are not mutually exclusive. We're also reaching for more beautiful plates and dishes. We don't want to become cheaper and more casual."

The words "cheap," "casual," and "Canlis" don't even belong in the same sentence. Pulling up to the restaurant, I was immediately made aware of this fact: There, neatly parked in a row by valets, were three Mercedes-Benzes, a Jaguar, a Land Rover, and a glossy red Mini Cooper.

Inside, it's easy to see why Brian Canlis likened the restaurant to an opulent ship: It's gorgeous and sleek. Windows line the entire east-facing side of the restaurant, offering unmatched views of Lake Union and the Cascades. At night, tiny lights hidden in the ceiling mirror the twinkling lights of the city. The Roland Terry–designed building is a mid-century-modern dream of clean lines and striking natural elements, including a dark wood and stone interior.

In the dining room, formal attire unites servers and diners adhering to Canlis's dress code (men are asked to wear a suit or sport coat). "I love the fact that people dress up for dinner," said Brian Canlis. "I think our city needs at least one place like that. Dressing up tells me that this night is different from any other night." Indeed, part of the pleasure of dining at Canlis actually happens before you arrive, when you're at home, getting dressed with your date, perhaps enjoying a predinner cocktail and getting a little tipsy on the anticipation of what the night might hold.

And if you didn't already realize that your night was going to be special, you'll know it the moment the food—brought to you by a fleet of flawlessly choreographed servers, hosts, bussers, and sommeliers (everyone does a little bit of everything here, and they all do it very well)—arrives at your table. From the first bite of steak tartare—unctuous mini cubes of Wagyu beef nestled in a delicate, savory tuile—it was clear that the kitchen aims to blow your mind. And it succeeds.

Canlis's current eight-course tasting menu ($145 per person) is remarkable. It's a respectful yet playful interpretation of the restaurant's classic dishes, executed with modern techniques and an abundance of local and seasonal flourishes. (It's worth noting that a highly skilled and confident kitchen staff conceived of the menu during the months Canlis was operating without an executive chef.)

Along with steak tartare, the meal starts with two other dishes: a small portion of the iconic Canlis salad, unchanged in 65 years, featuring romaine, bacon, oregano, Parmesan, and mint tossed in a little wooden bowl with a flat, thin "crouton" laid on top like a lid. Atop that sit two sweet, quivering tomato hearts. (The salad was too salty, but that was the only disappointing part of the meal.) Then there's the teriyaki beef, which you prepare yourself: A slice of raw meat comes on a plank of wood, and you cook it on an accompanying hot stone using tweezers, then squirt on a little teriyaki sauce from a plastic capsule and garnish the dish with bits of green onion. Think of it as an icebreaker—a slightly awkward but fun excuse to roll up your sleeves.

The rest of the meal is a bit of a blur, each course more delicious and impressive than the last. There are lightly smoked rectangles of salmon served with big, briny spheres of roe and set amid a tangy yogurt and a verdant but mild Bibb lettuce sauce. The whole dish is topped with a few leaves of miner's lettuce, whose lovely, lemony presence won't last much longer through spring.

Squab was served two ways: breast meat cooked to a perfect, rare purple, and confit thigh—deep, dark, satiny, and begging to be picked up and sucked clean to its tiny bone. The carrot puree served alongside was stunning in both sweetness and acidity. Surprisingly, there's no citrus or vinegar added: The carrots are simply fermented in salt for a month.

My favorite course was the updated version of Peter Canlis's prawns, traditionally prepared with garlic, lime, and dry vermouth. Two prawns are served: one, head on, poached in butter then marked for a few moments on the grill, its texture slightly firm but still so rich that it seemed to melt on the tongue. It held just a whisper of char and smoke, and the perfect amount of lime to cut the buttery fat. I got so lost in the moment that I didn't think twice about breaking its head off with my fingers and crunching through the whole spiny thing, its juice running down my chin.

The other prawn is served, simply, raw—perfect and sweet. The prawns had arrived from Anacortes that afternoon, from a guy who Williams had found to be his supplier. The new chef, whose first day on the job was April 13, is clearly wasting no time making use of the best the Pacific Northwest has to offer.

Unsurprisingly, service at Canlis is outstanding, if a bit rehearsed. Everyone is clearly knowledgeable about the food being served but, more importantly, when they don't know the answer to a question, they say so, and come back promptly with a response. The experience is designed and executed so that every diner feels cared for and respected.

While Canlis patrons may be younger than they've been in the past, the majority of them are still well over 50 and overwhelmingly white. The most accessible thing about my dinner at Canlis happened at the start of the evening, when the piano player played "Say My Name" by Destiny's Child as we were being escorted from the lounge to our table. We got so excited that we sang along and it felt, at least for a moment, like we might actually belong in such an exclusive club. (Later, when the piano player walked by our table and we expressed our appreciation, he laughed and said, "Pretty sure you guys are the only people in this place who noticed that.")

Small moments like this might reflect a thoughtful shift toward greater accessibility. But don't expect change to come quickly. This is still, after all, a restaurant where female servers were made to wear kimonos as uniforms until 1996. The third generation of Canlises have been making adjustments since they began running the restaurant in 2005, but as Brian Canlis noted during his yacht metaphor, "You don't crank the rudder when you hop on, you start with a small course correction."