Starbucks Continues to Lose Its War on Workers, REI Workers in CA Organize, and Americans Keep Faith in Labor

Well, folks, it appears summer is finally here. We are clear of dreary days for a while. It's a great time to get outside, get some fresh air, touch grass, and slow things down a little. But before you go, let's catch up on some news that's relevant to you, the American Worker.

Starbucks continues to lose the war on workers: On Wednesday, another Starbucks store in the Pacific Northwest filed for a union election — this time in Springfield, Oregon. That news came on the same day another Bellingham store voted 10-3 to unionize, making 15 total locations in Washington and two in that sleepy lil’ college town up north. These folks are inspiring workers around the country.

Rally for Starbucks workers: But of course, it’s not just about filing for elections or winning them. It’s about winning fair contracts and material improvements. That’s why local Starbucks workers will be hosting a rally next Saturday, July 16 at the Seattle Roastery to urge Starbucks to come to the bargaining table and stop their union-busting BS. Come out and show your support:

Sbux is on the offensive w/firings, store closures, & doling out money & benefits to anti-union workers. Sbux workers are fighting for living wages, healthcare. Sbux made $4,000,000,000 in 2021. They can afford it. Join us Sat. 7/16, 12Noon, Seattle Roastery! #NoContractNoCoffee pic.twitter.com/9qMTzhNYrV

What’s your dream job (posting)? Starting January 1 of 2023, employers must list salary ranges and other pertinent information on job ads in Washington. Got some ideas for what’s pertinent? Chime in between now and August 12th here.

$71,603 returned to Seattle domestic worker: In a first-of-its-kind move, Seattle’s Office of Labor Standards charged an employer with, well, pretty much everything, including not paying minimum wage, withholding sick time, and not paying overtime. Over $71,000 is going back to this worker! A hell of a conquest.

Musk quietly sired twins with employee: In a certified weird one, it turns out Elon Musk fathered twins with one of his top executives, the director of operations and special projects at Neuralink. Very normal to knock up someone who works for you! Nothing to see here! Unless you really want to read more, in which case Reuters has the details.

REI workers in CA organize: More Perfect Union reports that workers down in California are following the footprints of the group that organized the SoHo location in New York. More with the organizers down Californie way here:

REI claims to be a progressive company but employees say it’s a facade.

Americans keep faith in labor…and literally nothing else. According to a new Gallup poll, our confidence in our institutions is (understandably!) plummeting. The presidency, the police, the medical system…all the ones that make you go yeah, that tracks. But labor? Well, I guess my section header spoiled the surprise. But yeah, labor strong.

Because we know our bosses won’t protect us:

They’re dead. That’s where they went. All these people who had to work through the worst of it. They died. One million people died and we’re confused about a labor shortage. https://t.co/084QUcZ4D4

Amazon under fire: Speaking of lax worker protections, a tough week for the Worst of the Worst! Amazon appeared to be nearing a deal to build a warehouse in Newark, NJ, and they would’ve succeeded, too, if it weren't for these pesky labor groups! The New Jersey Monitor has more on that.

Activists file Amazon complaint with SEC: The Strategic Organizing Center took a pretty creative shot at Bezos and Buddies by filing a complaint with the SEC claiming the company misrepresented information to its shareholders about dangerous working conditions in the company's warehouses. Lovin’ it.

Jeez! After a week like that, it’s nice to round up all your best friends and go do something fun:

This photo of Jeff Bezos riding Space Mountain completely alone is one of the funniest, most pathetic demonstrations of wealth I’ve ever seen.

Imagine having the power eradicate poverty & choosing to instead spend your money and time doing shit like this. pic.twitter.com/NxYexDlQ9A

What else?! Bloomberg seems to be conceding that workers hold some power heading into this likely recession; 19th News has a great perspective on how women are leading the labor charge; Biden gave the Presidential Medal of Freedom to 17 people, including the ghost of former AFL-CIO president Richard Trumka; and we’ve got union election filings from a Verizon store in Portland, a hospital in Hillsboro, and our buddies at Real Change.

Send us your tips! Sound off in the comments!

Now, your banger song of the week comes courtesy of Arcade Fire’s new album, We. Released in May, this album is a cathartic exploration of life in America in 2022: Anxiety, nostalgia, questioning that nostalgia, instability, trying to be strong and focusing on what matters, and failing. Here’s “End of the Empire I-III.” Yes, it is a lot, but sometimes it’s nice to hear your thoughts outside of your head:

We made it through another week! May our times soon become less interesting. Until then, take care.

Comments 1
Tags: Labor News
The Stranger depends on your continuing support to provide articles like this one. In return, we pledge our ongoing commitment to truthful, progressive journalism and serving our community. So if you’re able, please consider a small recurring contribution. Thank you—you are appreciated!
CONTRIBUTE NOW 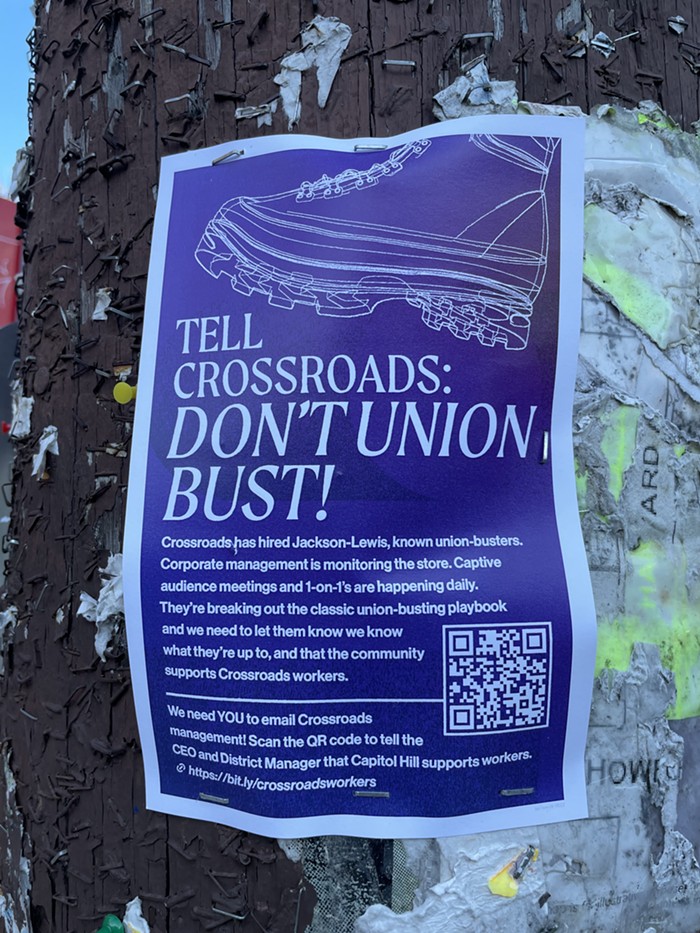