A Few Cubic Meters of Love 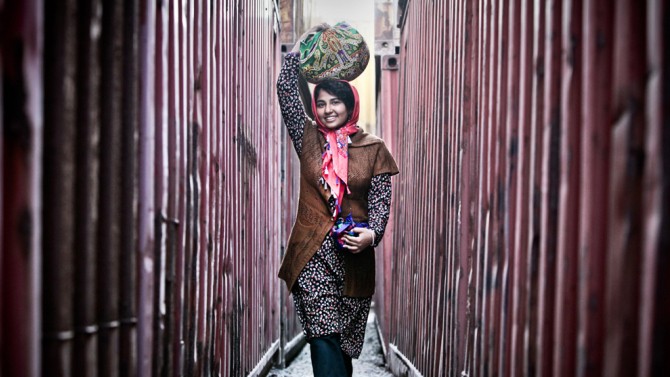 Afghanistan’s foreign-language Oscar® entry is truly a “Romeo and Juliet” for the globalized world. Set in a shantytown outside Tehran where a factory owner employs Afghan refugees not legally permitted to work in Iran, A Few Cubic Meters Of Love tells the story of two young people who find each other, and a bit of happiness, in the most unlikely of circumstances. Saber, an orphaned Iranian teen who works at the factory, is like a son to the good-hearted owner, Mr. Sabahi, while Marona, a young Afghan asylum seeker, is closely guarded by her anxious father. Meeting secretly in a one of the shipping containers housed in the factory yard, the charm and delight of their courtship makes a dramatic contrast with the harsh realities that await just a few meters away. When police raid the encampment and her father decides they must return to Afghanistan, though, Marona and Saber face a critical decision about their future. A remarkable first work from director Jamshid Mahmoudi—for whom cinema provided a ray of hope during his own experience as an Afghan refugee—this star-crossed romance features captivating performances from an entirely nonprofessional cast, bringing freshness and realism to a story that is both urgent and timeless.

Screw the Romeo and Juliet comparison. Here’s the deal: You’re wandering through a smog-filled wasteland, lost. Suddenly, you spot something impossibly beautiful nearby. Your face gets flushed, your heart beats fast, and you think: This is it. This is my way out. SPOILER ALERT: Sometimes the wasteland wins! This film will destroy you. (SYDNEY BROWNSTONE)