Want Exposure at Noise for the Needy 2010? Help Us Bankroll This Bad Boy!

Mandi Moshay, Noise for the Needy

Noise For the Needy purchased the right to post on Slog for a week in Strangercrombie, our annual charity auction. More info about our charity auction here.

Who won the limited edition silk screen poster signed by the members of The Black Angels and The Warlocks at their 2008 NFTN show at Neumos?

Which local politician announced The Constantines at NFTN 2009?

And the winner is: drb! 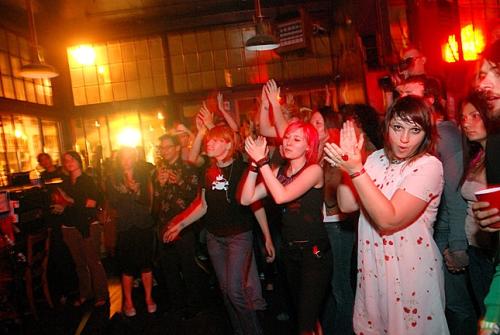 Noise for the Needy brings together local musicians, promoters, artists, and volunteers with the shared vision to help those in need through the power of music. Last year's festival raised over $20,000 for Transitional Resources thanks, in large part, to the amazing generosity of the concert-goers. But the shenanigan-filled festival would not have been possible without support from our sponsors—Pabst Blue Ribbon, The Stranger, Shorty's, KEXP, eLitigation Solutions, The Windward Communications Group, Seattle City of Music, 107.7 The End, Emerald City Soul Club, Piecora's, Neumo's, and City Arts Magazine.

We are hoping for record-breaking fundraising this year, meaning that support from sponsors is more important than ever. Lucky for you (yes, local business owners, I'm talking to you) the opportunities to get involved are pretty much endless. The Noise for the Needy festival is a great way to gain exposure with those elusive, savvy, disposable-income-possessing, city-dwelling 20- and 30-somethings. Sponsorship levels range all the way from logo placement on NFTN materials, to giant fancy packages with ads, radio spots, VIP passes to the festival, and invites to the super-exclusive kick-off party. The advertising is great and all, but the best part is being able to contribute to an organization that is positively effecting change for some of the most vulnerable members of our community.

If you’re a super small business or the economy has taken large monetary gifts out of the cards, you can still get involved. You can display festival posters in your window and put some festival brochures on your counter! Contact Sophie Tiffany to be added to our distribution list. We’ll post the businesses on the list on our website as places people can go to pick up our brochures, bringing more traffic to you! You and your employees might find a nice break from the 9 to 5 by volunteering some time to NFTN, either before or during the festival. Give us a mention on your website or blog, and join our social network. We’re also in need of some cool, high-capacity locations for pre- and post-festival fundraising events so let us know if you have a space we can use. Got other ideas? Shoot us an email and we’ll find a way to get you involved.

The NFTN 2010 beneficiary will be announced here on Slog on Wednesday, January 27th!

For more information or to set up a meeting to discuss sponsorship options, email us at sponsorship at noisefortheneedy dot org.

Comments 0
Tags: Music Blogs Strangercrombie Life
The Stranger depends on your continuing support to provide articles like this one. In return, we pledge our ongoing commitment to truthful, progressive journalism and serving our community. So if you’re able, please consider a small recurring contribution. Thank you—you are appreciated!
CONTRIBUTE NOW