I’ve been going to Bumbershoot since 2004 and this year’s lineup struck me as the least interesting during that time, musically speaking; the comedy bill was impressive, as usual. (To be fair, Bumbershoot's organizers had less time than usual to construct the schedule.) But there were some highlights amid the prevailing mediocrity. Flying Lotus (Saturday night at KeyArena) and Melvins (Sunday afternoon in Memorial Stadium) towered over the competition. That these cult artists performed in these massive venues added layers of surrealism to the spectacle.

Being the stoner that he is, Flying Lotus hit the stage about 12 minutes late. “It’s all love,” he said upon setting up behind his laptop, which was behind a transparent screen (I think; I was far, far away in the upper deck). “The weed is legal—fuckin’ beautiful. [pause] TOO BAD YOU’RE DEAD!” And with that, FlyLo let loose a breakneck series of tracks that zig-zagged from celestial soul (sans corn) to martial shuffle funk to futurist, fractalized hiphop, including what he described as “the first beat I made for Kendrick.” Things roller-coasted from grandiose to goofy—sort of mirroring the light show—in a display of what ultimately boils down to music for avant-garde cartoons—strange and heady sounds to be hearing in a basketball arena, for sure. “Smoke DMT,” FlyLo advised before exiting the stage. America! 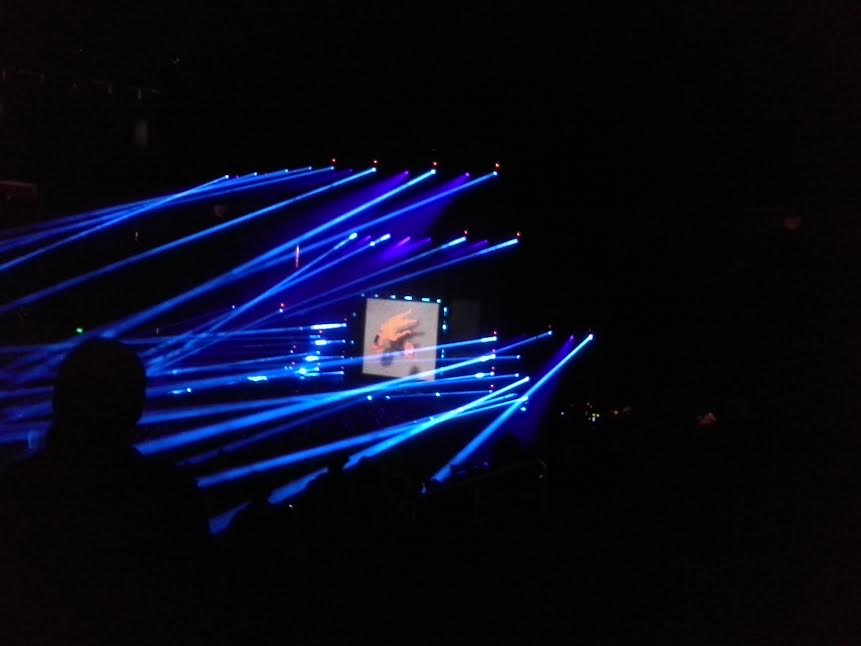 Melvins had the difficult task of playing about an hour after Dead Moon’s Fred Cole collapsed onstage from heart problems while playing Memorial Stadium Sunday afternoon. Despite this heavy, sad news fresh in their brains, Melvins proved that 30-plus years of toil haven’t dulled their heavy-metal sorcery a whit.

First, a word about Melvins’ intro. You know that cough that precedes Black Sabbath’s “Sweet Leaf”? Well, they sampled that and then phased it and stereo-panned it for a minute or two, like a Satanic Steve Reich. It was absolutely mesmerizing, and if they’d just run that for 45 minutes, I’d have been thoroughly content. But Melvins went on to do a set that torched and stabbed with vitality and thrilling dynamics. Guitarist vocalist Buzz Osbourne (in a black and gold wizard’s robe) and bassist Jared Warren (in a turban and less gaudy robe) and unleashed molten torrents of that Northwestern metal that made the phrase “the power and the glory” run through my head like a mantra.

What elevates Melvins above most in the field is the dual-drummer slammage of Dale Crover and Coady Willis. They were ridiculously entertaining, trading off solos and slapping skins and clacking sticks with impeccable timing and choreography. This was not a sludgefest, but rather high-energy hard rock that deserved a football field’s worth of real estate in which to stretch out and ramalama the hell out of the crowd. One 30something dude simply started running all over the field out of sheer joy and adrenaline. Weird thing is, I never get all that excited about Melvins records, but live? Live, they just electrify me and make a convincing case for being one of the greatest bands of all time.

Beyond these two spectacles, I caught some other good sets. Briefly…

Local beatmaker Diogenes (Dax Edword) had to contend with Vera’s vibeless space and sparse audience Saturday evening. Nevertheless, he fractured funk and re-glued it into oddly angled tracks, creating an ADHD boom-bap that tips a dusty crate toward Madlib.

Bilious Seattle rock quartet Constant Lovers impressed Sunday evening on the Rhapsody Stage (which should actually be called the Afterthought Stage or the Shitty End Of The Stick Stage, given its out-of-the-way location). With the entire Chimurenga Renaissance crew in attendance, Constant Lovers demonstrated how an excess of testosterone can be put to positive use on a stage. Their two guitarists also bash their own toms and snare. Let’s hear it for multi-tasking and cantankerous hard rock that inspires African-American hiphop artists to bang their heads.