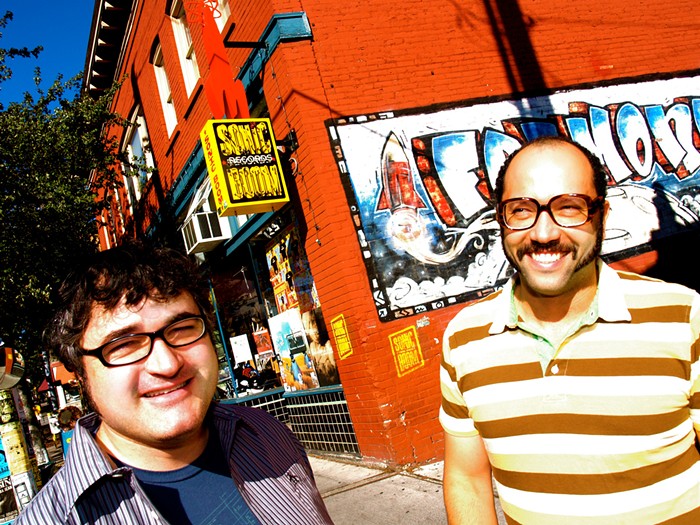 On September 27, 1997, Jason and I had no fucking idea what we were getting ourselves into. We were in our mid-20s, both college graduates who didn't want to get real jobs like all of our friends had.

So we opened a record store.

Sonic Boom Records first appeared as an idea only a few months earlier. Neither of us had the record store fantasy—something most record store owners would claim. Jason was a political economy major from Berkeley. I'd majored in communications at the University of Puget Sound. We both worked at Easy Street Records in West Seattle because we wanted to listen to and talk about music all day. Jason hosted radio shows on both KCMU and KNDD. I played drums in bands and was in the process of starting my own small record label.

We managed to scrape up the money on credit cards and a loan from Jason's mom, and we signed a lease on a tiny retail space on the main floor of a house at 503 North 36th Street in Fremont, the only Seattle neighborhood that we thought could sustain a new record store.

We opened just far enough off the beaten path for nobody to notice us. We sometimes played three or four albums—that's how we measured time—without a customer entering the store. We sat on our couch with nothing to do, inhaling the sweet smell that floated up from our basement where our landlord, Bill, baked all of Alaska Airlines' cheesecakes. Bill was known throughout Fremont as, appropriately enough, Cheesecake.

Jason continued to work at Easy Street two days a week, and I worked the front counter at American Music two days a week, giving us both a schedule of 13 days on and one day off. We put everything we could back into the store, sometimes paying ourselves $250 every two weeks, or $225 if the store really needed some extra money to expand the Tom Waits section.

For lunch, we shared one order of cashew chicken from Jai Thai and asked for extra rice. Marianne who managed Rudy's Barber Shop next door often brought us free soup from Bagel Oasis across the street. We traded music for food at Longshoreman's Daughter, where Jason met his wife, Tes, who waitressed there.

In 1998, Death Cab for Cutie released their debut album, Something About Airplanes. We proudly and ambitiously ordered 10 copies, a huge number for us at the time. The band played a live in-store and helped establish Sonic Boom as a hub for Northwest indie rock. Nick, the bass player, soon became one of our first under-the-table employees.

Major-label A&R men started calling the store asking about Harvey Danger, Modest Mouse, Death Cab for Cutie, Vendetta Red, and Pedro the Lion. We found them to be a welcome source of supplemental income and soon had several of their credit cards on file. When we were short on rent money, we loaded up boxes with local music bound for New York and Los Angeles.

We held rent parties where we'd trade CDs for a keg from the brewery up the street and invite our friends over for free beer after-hours. We were always amazed at how much money people spent after a few free drinks in a record store.

MTV's The Real World shot a season in Seattle for five months in 1998, and one afternoon the entire cast of early twentysomethings invaded the store escorted by two Seattle police officers, a camera crew, and an entourage wearing satin jackets and barking into headset microphones. We had a brief, awkward, on-camera discussion about Modest Mouse with "Nathan." But he didn't buy anything, and we didn't make the edit.

On a rare sunny afternoon, an obvious out-of-towner entered the store straight off the flight from LAX, wearing wraparound sunglasses and crisp better-than-Abercrombie gear.

"Hey, listen." He looked both ways and approached us, as if there were other customers in the store. "Limp Bizkit is going to be recording down the street for a while. I'm just doing a walk-around, quietly letting people know what's up. If you see Fred Durst or any of the guys, they just wanna be chill. It's no big deal."

Word spread around the neighborhood like wildfire. Marianne from Rudy's came tearing into the store, oblivious to the fact that we were actually now busy with a few customers.

"Limp fucking Bizkit!" she screamed, slamming the door with a devilish grin. "Sorry. Hi, everyone."

We never saw Fred, who was dating Carmen Electra at the time. Apparently, they got in a very loud, public blowout in Rudy's before Limp Bizkit even started recording their next masterpiece.

That same year, a shooter caused a Seattle city bus carrying 31 passengers to drive off the Aurora Bridge and land on top of a Fremont apartment building.

Another shooter randomly invaded businesses around North Lake Union, causing a manhunt that shut down most Fremont and Wallingford businesses for the day.

On March 1, 2000, Sonic Boom moved to 3414 Fremont Avenue North, the space sadly vacated by Glam-O-Rama. We were now in the epicenter of Fremont, and our business tripled overnight.

Indie rock exploded. We sold thousands of albums by Elliott Smith, Interpol, Built to Spill, Cat Power, the Shins, the White Stripes, Grandaddy, and the Strokes. We watched hundreds of people line up for Monday midnight sales for new albums by Carissa's Wierd, Radiohead, and Weezer.

Our customer base expanded and included Peter Buck, Jeff Ament, Dave Matthews, Duff McKagan, and other musicians we never imagined we'd interact with on a regular basis.

In October 2001, we opened our second and much larger store on Market Street in Ballard. In March 2003, we opened our third store, on 15th Avenue East on Capitol Hill. In 2004, we expanded the Fremont Avenue store into the basement for a vinyl annex, and then into the space next door, which became the Sonic Boom General Store.

Suddenly we found ourselves with 23 employees. One had a stalker who hid creepy crayon-drawn notes to him in our CD bins. Another had to be fired on his birthday. Two of them had to be pulled apart before a fistfight broke out on the store floor. One may have saved another one's life during a seizure. Two staff couples have been married (and also divorced).

When things were thriving, we donated enough money to KEXP to have our own plaque outside their performance studio. We threw at least two boat cruise parties on Lake Union where we played that first Junior Senior album very loud and ate boxes and boxes of Ezell's fried chicken.

By 2003, Sonic Boom had developed such an industry presence that Hollywood Records not only sent us regular free shipments of the Polyphonic Spree's excellent debut album, they also sent in fake customers to buy them from us. We had to e-mail the label:

Dear Hollywood Records: Thank you for the free Polyphonic Spree CDs. Please keep them coming. You might be surprised to hear that people actually like this album, so please stop sending in fake customers who are depleting our stock. Kind regards, Sonic Boom Records.

Our alarm company called late one night to inform me of a break-in. I met the police at the Fremont store to find our front door kicked in and our cash register and computer smashed to bits on the tile floor. I stayed up as late as I could, listening to music and calling friends trying to convince them to join me for an all-night party. Nobody came, and I woke up alone, lying on the store floor, cursing every supposed 24-hour locksmith in Seattle.

We hosted hundreds of bands over the years, including many of our favorites: M.I.A., the New Pornographers, Joanna Newsom, Supergrass, Spoon, My Morning Jacket, and Stephen Malkmus.

Saul Williams gave an intense, inspiring performance in the Ballard store the night George W. Bush was reelected. Nikki Sudden refused to put out his cigarette when he entered the Fremont store, insisting, "Without cigarettes, there would be no rock and roll!" An elderly woman fainted in the Capitol Hill store during classical violinist Hilary Hahn's packed-beyond-capacity performance, and returned the next day with her lawyer son... to apologize.

Soon came Amazon, iTunes, and Napster—the big threats to our business. Tower Records closed. Then Virgin. But we insisted that this sudden, incredible access to music online only helped us. Seattle had always been supportive of its neighborhoods and local businesses, and this proved to be true.

In 2008, I moved to New York. Sonic Boom has continued to thrive under Jason's leadership over the past eight years as we scaled back our locations to just one in Ballard. Jason recently moved his family to Minneapolis, and we are happy to be handing the store over to a longtime customer.

We've seen digital music sales take off and decline as streaming emerges. At the same time, vinyl sales have reached a volume we never could have predicted and the compact disc refuses to die. Friends who were once customers, clerks, and label reps now run companies and play in bands that have sold millions of albums.

This is a huge thank you to everyone who has had anything to do with Sonic Boom Records over the past 19 years: our employees past and present, friends, bands, label and distribution partners, local and national media, and, of course, our customers who have been so loyal and supportive over the years.

Nabil Ayers was the co-owner and proprietor, with Jason Hughes, of Sonic Boom Records from 1997 to 2016.

Comments 1
Tags: Music
The Stranger depends on your continuing support to provide articles like this one. In return, we pledge our ongoing commitment to truthful, progressive journalism and serving our community. So if you’re able, please consider a small recurring contribution. Thank you—you are appreciated!
CONTRIBUTE NOW