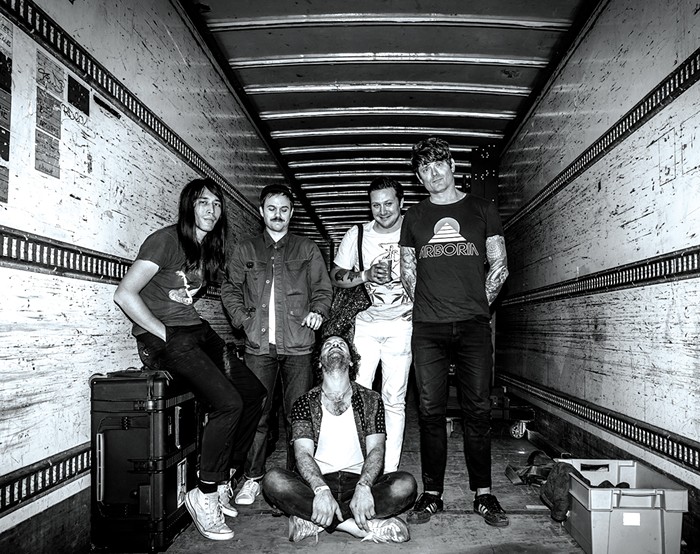 When was the last time rock music yielded innovation? Was it the glut of guitar reinvention from My Bloody Valentine circa 1988's Feed Me with Your Kiss/You Made Me Realise/Isn't Anything? Earth's ambient-metal second LP from 1992? Or perhaps Boredoms' disorienting trance ecstasies on 1999's Vision Creation Newsun? Whatever the case, we've not exactly been inundated with groundbreaking rock music since those astonishing efforts.

It seems as if rock has been treading stagnant water for the last decade or two. Sure, there have been many great records released in the genre over the last 20 years, but nearly all of these have relied on pastiches of past glories. We've had to make do with clever repurposings of krautrock, post-punk, psychedelia, synth-pop, noise, metal, and dub, made for people raised on new technology. (On a tangent: Maybe demanding musical innovation is unrealistic—and even juvenile, as if one needs shiny new sonic toys every month to remain engaged with the art.)

This preamble brings us to Oh Sees, a prolific California group led by John Dwyer. There's nothing novel about Oh Sees, but over 40 albums, EPs, and singles in 22 years, they've cycled through numerous styles with panache and passion. Thanks to Dwyer's doggedness and prodigious songwriting nous, Oh Sees have become paradigmatic 21st-century rockers—great synthesizers and energizers of rock's multifarious modes. Effortlessly diverse and dynamic, their songs pour out of Dwyer like the sweat he excretes during their galvanizing concerts.

While Oh Sees may not be doing anything original, they are imbuing familiar moves with a conviction that signals music is a life-or-death matter—a rare quality among today's rock acts. In their wide-ranging catalog, the spare, fey folk rock of Thee Hounds of Foggy Notion beguiles just as satisfyingly as the scathing, ramshackle garage rock of The Master's Bedroom Is Worth Spending a Night In, the baroque-and-roll of Drop, the serpentine hard rock of Smote Reverser, and the feral, motorik chugging scattered among several albums (check "The Static God" from Orc for one of the wildest rides). Their latest, Face Stabber, finds Oh Sees at their most complex and psychedelic, closing with the 21-minute "Henchlock," which takes you on the strangest trip in the band's history.

As great as Oh Sees' recordings are, though, they really thrive live, and their relentless touring has led to them becoming mid-level-festival staples. Their 2011 set at Bumbershoot remains one of the most amazing I've ever seen at that event—and I've seen hundreds. In the flesh, Dwyer's swagger prevails, his guitar worn tits-high as he pogos, spazzes, and falsettos around the stage while the group—powered by two drummers—toggles between the rough and the pretty with balletic verve.

In a 2009 interview in The Stranger, I asked Dwyer if he ever feels as if it's impossible to do anything new within rock's parameters, or if he's unconcerned with innovation and strictly interested in writing good songs. He responded, "I don't feel I have so much the 'innovator' talent. It would be nice, but then you hear the Idle Race [Jeff Lynne's pre-ELO band] and never want to pick up a guitar again... So, yeah, I just do what comes naturally. It's either that or get a job, and I have no skills."

Thankfully, Dwyer hasn't had to resort to any non-musical labor in the decade since that interview transpired. He's spent every year cramming as much recording and touring into his schedule as he can muster, and his hyperkinetic work ethic has reaped serious rewards. Those include financial ones, as he runs his own label, Castle Face Records, thereby eliminating industry leeches. Free to do as they please, Oh Sees traffic in some of the most exhilarating self-indulgence happening in rock today.