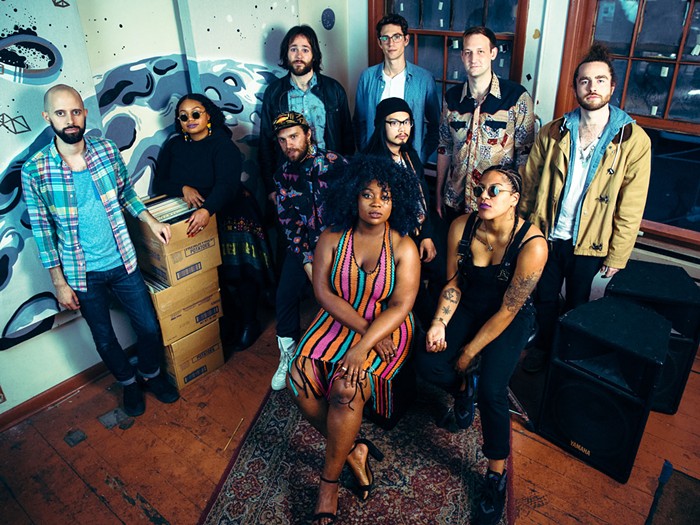 High Pulp are mighty in size and poised to go big with their latest release. Kaline Cimone
Tweet

One of Seattle's biggest bands personnel-wise is poised to go big in a different way, if current trends continue. With frequent shows around town and a recent live appearance on KEXP, High Pulp are gaining momentum, which should culminate in their March 7 record-release show at Neumos.

High Pulp's multitudinous members interlock with loose-limbed precision to create a nuanced amalgam of funk, jazz-fusion, and R&B. In local terms, you could consider High Pulp to be Eldridge Gravy & the Court Supreme's slightly smaller and more subdued sibling. Their music might be more suitable for the after-party and what seductions you leverage after the after-party than the party itself. But High Pulp can rock a dance club, too. Check out "Midnight Bistro"—a sleek, nocturnal electro-funk number that sounds like Mandré and Grover Washington Jr. jamming in a planetarium that serves wine—and the spasmodic, action-scene funk of "Juiced."

On the flip side of this aesthetic, High Pulp have recently tackled three classics of spiritual jazz for the Mutual Attraction Vol. 1 EP. It's the beginning of a series in which the group pays homage to its formative influences. The initial edition features covers of Alice Coltrane, Pharoah Sanders, and Sun Ra pieces. High Pulp handle these heady works with poise, subtly reinterpreting touchstones of black avant-garde expression. Talk about setting a daunting bar for yourself... but High Pulp handle the high-wire act with aplomb.

While jazz's freer end of the spectrum is the music that most bonds High Pulp's members, they also love Miles Davis's Birth of the Cool LP and Duke Ellington's big-band material. In addition, they take inspiration from, among others, Shabazz Palaces, Jonny Greenwood, Flying Lotus, Frank Ocean, Hans Zimmer, and Yes.

High Pulp honed their skills for their forthcoming record over the span of a year-plus residency at the Royal Room (where Granfelt works in social media). Every Wednesday night for a few hours they'd play tunes and improvise, forming the ideas that would become finished songs. "There is a really fervent creative energy in the band," Granfelt said in an e-mail interview. "That allows us to continue to go back to the drawing board, again and again, until we settle on something that everyone can sign off on."

With so many people in High Pulp, it must make for an interesting and possibly convoluted creative process. Do chance and spontaneity play a role? "It's all spontaneity and chance," Granfelt said. "Songs can come from any angle, at any time. Sometimes things are organic; for example, we may be setting up at rehearsal or a gig, and someone will start messing around, and I'll be like, 'Keep playing that!' and record a voice memo that I'll revisit months later and pitch as an idea to build off of. Other times, one of our members may come to rehearsal with a full idea they had for a tune with multiple sections and we go from there.

"In all cases, we write as a unit. It doesn't matter where the idea begins, but by the end it will have gone through the ears of all of us and will get our cosign. Once everyone agrees that something is done, then it's done. Until then, we keep searching."

After being a strictly instrumental proposition for years, High Pulp decided to bring in singers last year "to push ourselves in a new way. Just to reach for discomfort, a challenge," Granfelt explained. "Collaboration is a real core part of the identity of High Pulp. We view ourselves as a collective. We've played with 20-plus different musicians over the years, either on gigs or in the studio, so it was natural to bring vocalists into the fold.

"This was an opportunity to play less, to leave more space, and to be super intentional as a writing unit. We all take influence from those Soulquarians releases in the early 2000s, with Erykah Badu, D'Angelo, the Roots, Common... We wanted to see what happened if we took a step in that direction and tried to put ourselves in that headspace."

Inbox Jukebox Track of the Day: A Cover of Alice Coltrane's Astral-Jazz Classic "Journey in Satchidananda" by Seattle's High Pulp