He Plays Music, He Models, He Roller Skates! 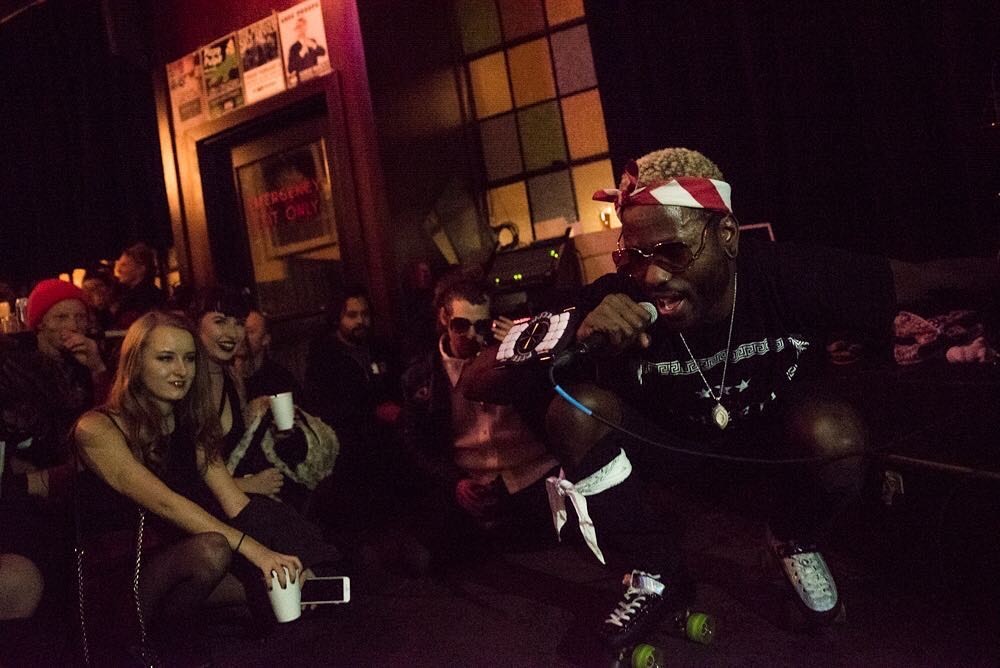 Turns out 52Kings is exactly as compelling as that photo made him appear. He’s a bright-haired, roller-skating R&B musician. He’s also a model, a licensed cosmetologist, and a professional speed skater. You may have seen him skating around town, either at a venue or at a regular ol’ skatepark. (He likes Judkins and Marginal Way.) Or you might have seen him playing the piano, guitar, bass, cello, trombone, or trumpet at a local show. Or you could have just seen his bright hair bobbing above the crowd on a busy night on Queen Anne or Capitol Hill.

I sat down with 52Kings to ask him all the burning questions such as “Do you sleep?” (4-6 hours a night) and “Does Seattle have a good skating culture?” (Yes: Olympians Apolo Ohno and J.R. Celski are both from Federal Way). Here’s what else he had to say about cycling through neon hair colors, traveling the world, and how Seattle music venues stack up when it comes to roller skating.

THE STRANGER: Where’d you get your stage name?
52KINGS: My brother had a deck of cards, and they were all kings from all around the world: Turkey, China, everywhere. He traveled the world collecting them. He never let me touch the deck. He was like, “This is my sacred deck. You can’t touch this.” And I was like, “All right, I won’t. I’ll take the name.” So I took the name on, and now when you Google it you find me. To this day I still never touched the deck.

What’s your favorite kind of skating?
I got into quads [roller skates] when I moved here because of roller derby. I started playing for Puget Sound Outcast Derby, a men’s roller derby league. Most people don’t know about [men’s roller derby]. Then I slowly transitioned into just doing mostly roller derby and not speed skating. Speed skating is fun, but you’re just going really fast. Less than 30 seconds later, you’ve either got a medal or you fall. With roller skating, you can dance around. Roller derby is basically just dancing your way through the pack, and then you get your points.

You went to Colombia for speed skating. Where else have you been?
I’ve been to Colombia a couple of times for speed skating, and every time it’s better and better. The culture of speed skating is huge. I’ve been to France. A lot of places in the United States people don’t know for skating. There’s the Disney inline marathon they used to do. They used to skate through Disney and Epcot. NorthShore Inline Marathon in Duluth, Minnesota. Spain. Japan. There’s so many places. Italy. I like France. And Germany—I got to do skating and music, like a little tour.

How did you learn to skate?
Me and my sister learned to skate when we were younger. We were just dropped off at the skating rink. My sister did figure skating, and I wanted to do hockey. I was alright at handling the puck, but I was really fast. One of my coaches that scouted me, he told my mom “I’m going to make this kid the best.” And he did. I won everything. There were years I won consecutive races, championships. I was fully committed.

Why did you start skating during performances?
You see somebody standing in the middle of the stage. There’s a microphone. They stand there and sing or do whatever they do, and the crowd is all around them. The crowd is everywhere. How do you interact with all of those people at one time? My skates are an extension of me. It’s my feet and the wheels. It’s easier to communicate with the crowd. Also, with COVID, I’m not staying in one space. Plus it’s entertaining. People are like “Whoa, this guy’s on skates.” Or, if they know me, “He’s going to come out and skate—but is he? Is he?”

Have you ever fallen on stage?
No. I’ve jumped off the stage. It’s something about people not expecting you to jump off the stage on skates. They subconsciously make a circle, and it feels like you’re not at a show anymore. It feels like they’re a part of it. They’re invested. I wish everybody could be on skates. That’s the next move. A show at Southgate.

What’s your worst wipeout story?
It was speed skating. It was me and another colleague of mine. I hit the last corner, and I passed him. It’s called throwing hips—he took his left hand and pushed my hip. I was falling, and then he tried to jump over me and landed on me. It was crazy. I always tell people, if you’re gonna go roller skating, anywhere you go, wear wrist guards. You need those wrists, you can’t be typing, writing—nothing without wrists.

Does your skating inform your music? Do you ever choreograph your sets?
You know, I don’t. I’m just on my skates, and when I start performing it’s like, “Oh there I go.” I call it catching the spirit. If you’re thinking of anime, it’s like, “Oh, he’s going off. His level’s up on the radar.” When I get a groove it’s like I don’t even know I’m skating anymore.

What’s the most skate-friendly local venue?
All of them! Nobody’s ever said no to the skates. But I love the sound of the wood floor at Havana. Chop Suey has a really good venue when it comes to the skates because the floor is flat. The stage at Neumos is kind of uphill so if people are in the back they can still see. I like Barboza because the stage isn’t that high up, but it sticks out so you can hop off and hop back on and have a good time.

How does the skate scene differ from the music scene in Seattle?
I would say the skate scene is more forgiving. They want to help, help, help, help. Like, “Oh, you need skates. Any wheels? We got it.” The music scene is a little different. You gotta work a little harder. And if you mess up, you’ll be remembered for that mess-up. But in the skate world, it’s very lenient. I think that has to do with the fact that one thing people are paying you to do versus one thing you’re paying to.

You’re also known for your bright hair. How often do you change it? What are some of your favorite hairstyles you’ve had?
I change my hair every two weeks or once a month. Once I had this teal, like this crazy electric blue. Wa Na Wari did this event with Malcolm Wolfdelux. It was a photoshoot, a fashion show. So my face was on there, and I did music for it. Next thing I know, I see myself on these buses. I’m talking 40something buses in the city. Somebody was like “Dude, you’re on the bus.” I’m like “I don’t ride the bus. What’re you talking about?” And then he sent me a video, and it’s me with the blue hair. It was sponsored by the Frye Art Museum. They did this whole ad with Wa Na Wari. So I’m just like “Oh, I’m on buses!” And it just so happened that I was coming out with a whole album, In Remembrance to Reparations. That came out, the bus came out. It did great because of the advertising!