With Some Help from European Musicians 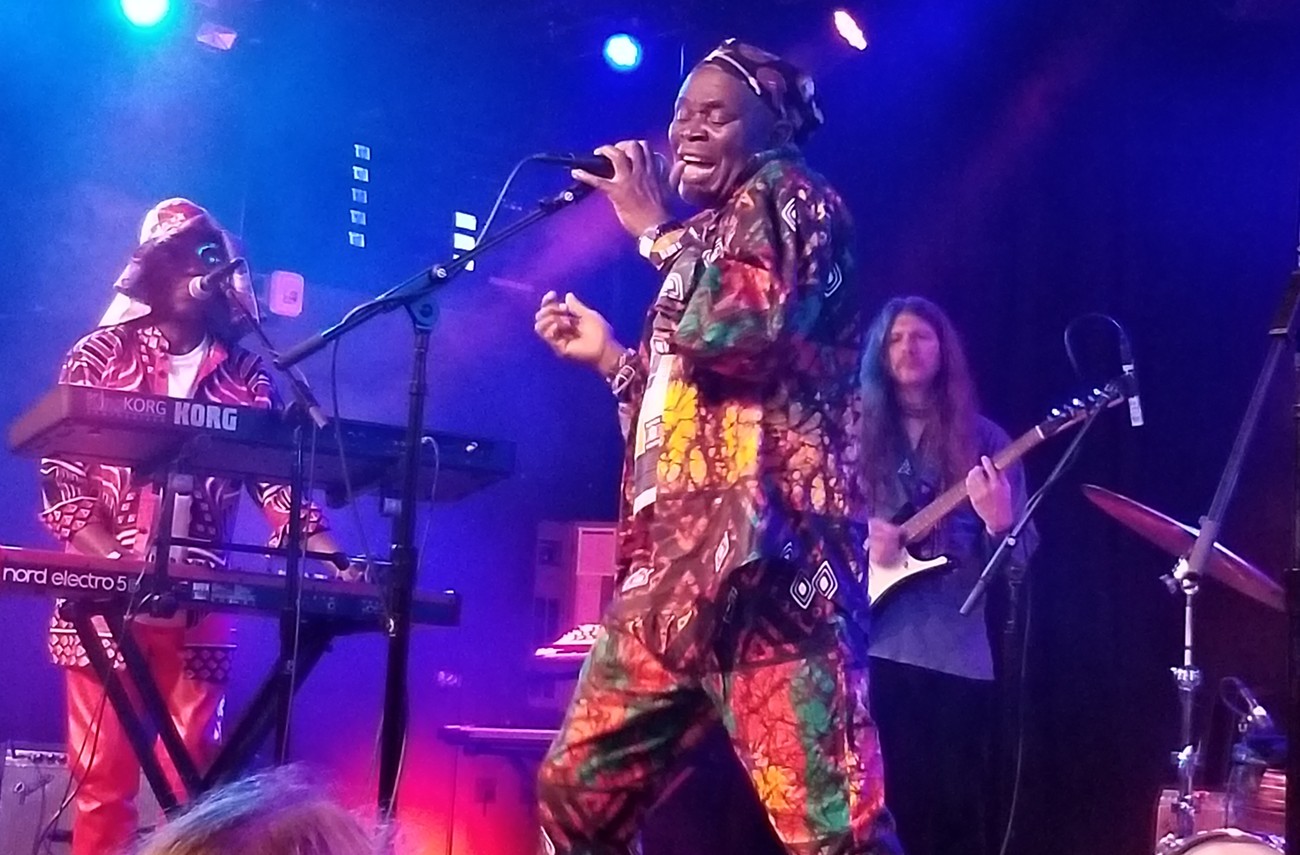 In the evanescent Zamrock movement that illuminated the southern African country Zambia ca. 1972-1977, W.I.T.C.H. were generally regarded as the scene's version of The Beatles... although the group's frontman Emmanuel Chanda sang so much in the style of The Rolling Stones' Mick Jagger that he took on the nickname “Jagari.” Chanda and his band finally made their Seattle debut and enchanted the crowd at The Crocodile with an 85-minute set that included several classics from their '70s LPs—which thankfully have been reissued more than once in the last decade (shout out to Now-Again Records)—and a couple of new ones.

For a little context: Zamrock is an exciting strain of garage- and psych-rock that filters those Anglo-American styles through African sensibilities. Those familiar Western sounds often take on afrobeat and highlife elements, and the resultant hybrid makes those genres sound fresh. (Novices should also check out Rikki Ililonga, Amanaz, Chrissy "Zebby" Tembo, and Paul Ngozi, among others.) Blessed with keen ears for hooks, W.I.T.C.H. and their joyous and poignant songs unsurprisingly have weathered the passing decades spectacularly.

W.I.T.C.H. took the stage thirty minutes late, and anyone expecting a group full of Zambians would be confounded by the presence of five European musicians, some of whom had just put on a scorching set with openers L'Eclair (more on them later). These badass players broke into a humid funkadelic jam before W.I.T.C.H.'s two Zambian members (including keyboardist Patrick Mwondela) walked onstage, both in flamboyantly psychedelic garb.

Chanda took bites out of an apple during the set, which only compounded his charming stage demeanor. The man's 70, but has the energy of someone half his age. “I've been here in my dreams,” he told the adoring audience before launching into one of the set's highlights, “Living in the Past,” a deeply moving and methodical tune that resonated with the nostalgiaholics crossing this concert off their bucket lists. (You can see a clip of the performance on my Instagram.)

The show had some unexpected moments of prog-rock bombast. “Evil Woman,” “Strange Dream,” and a new song whose title escaped me sounded more British and European than African. But overall, the group—which included bassist Jacco Gardner, guitarists JJ Whitefield and Stefan Lilov, percussionist Quentin Pilet, and drummer Nico Mauskoviç—maintained that special Zamrock flavor, and even supplied it with more funk than appeared on the original recordings. Lovers of wah-wah guitar FX were in heaven.

“Mushed Potatoe” [sic] ventured into James Brown territory, morphing into a B-Boy's delight, replete with a bongo solo. And, I kid you not, the super-elastic rhythm to the glorious “Lazy Bones” uncannily resembled that of the Stone Roses' “Fools Gold.” W.I.T.C.H. closed with the ebullient “Like a Chicken,” my fave by them, and the group funked it up into a triumphant climax.

Unfortunately, due to the late start, the crowd had dwindled from about 75 percent capacity to under 40 percent in a work-night war of attrition. Nevertheless, Chanda was profoundly touched by the support and high-fived as many attendees as he could before exiting.

As for Geneva, Switzerland's L'Eclair, I'd not researched them beforehand, so I had no expectations. My lack of preparation paid dividends, though, as their cosmic disco and porn-flick funk—played with absolute tightness and dexterity—hit me with way more impact than if I'd known what was coming. Polyrhythmic percussion storms, wicked fuzz-toned and chikka-wakka guitars, disciplined, strutting bass lines, and spacey whorls from Moog, DeepMind12, and Korg synths all cohered into five-dimensional grooves.

This was the kind of music cosmic-disco DJ god Daniele Baldelli would spin at peak time in some swanky continental club in 1981. L'Eclair were a well-oiled machine, pumping out extended instrumentals that never wore out their welcome. A woman screamed for an extraordinarily long time in appreciation to a conga solo, so you know this set was lit. Instantly converted into a fan, I bought their Confusions album for $30.