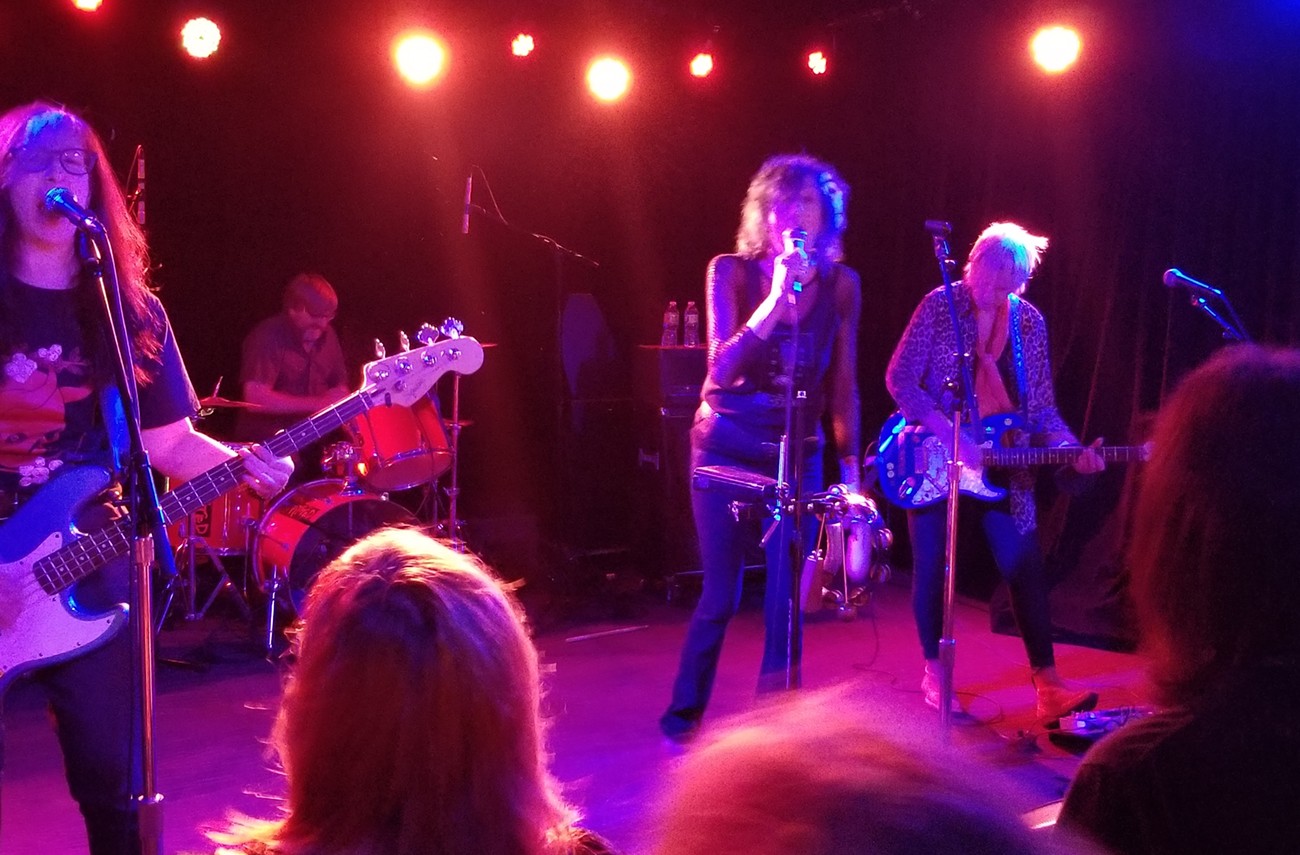 Friday night at Madame Lou's, Bush Tetras frontwoman Cynthia Sley told a smaller-than-it-should've-been crowd that this was the band's first Seattle show since Bumbershoot 28 years ago. And, I'm overjoyed to report, the cult New York City post-punk group was totally worth the long wait.

Bush Tetras blazed out of the gate with “Cowboys in Africa,” with Sley thwacking cowbell to accentuate the potent funk thrust as original guitarist Pat Place flashed her patented biting, saturating sound. Formerly of genius No Wave agitators Contortions, Place usually doesn't play riffs, per se, but rather generates a trebly spray of tones in the vein of Public Image Limited's Keith Levene. So, the bassist mostly carries the melody in Bush Tetras songs, and Korbet proved herself supremely capable in that department.

In their hour-long set, Bush Tetras did 15 songs, but most of them were so new or obscure, they don't appear on the crucial, career-spanning 2021 box set, Rhythm and Paranoia: The Best of Bush Tetras. Still, some old faves did get aired. “You Can't Be Funky” sounded as radiant as it did upon its initial release 41 years ago, when it tore up underground dance floors (I was there, man). Here, Place picked out her most beautiful motif, like an enchanted ringtone beamed in from 1981, and the band locked into the irresistibly loping groove with youthful vigor. On “Things That Go Boom in the Night,” Shelley proved that he could adapt well to Bush Tetras' dubbed-up funk matrices—impressive because he never really tackled that style with Sonic Youth. Street-harassment lament “Too Many Creeps” was a peak of paranoiac funk, as stalking and menacing as the best parts of PiL's Metal Box. If you've ever walked around Alphabet City in the '80s after closing time, you know this feeling.

Thankfully, the newer BT tracks held their own with the Reagan-era gems. The dub funk of “True Blue” (from 2018's Take the Fall EP) bore a tensile bass line on which you could do pull-ups. “There Is a Hum” from the 2019 single on Third Man Records possessed the suspenseful surge of peak-era Siouxsie & the Banshees. Switching it up, Bush Tetras did a glam ballad with sporadic rave-ups on “They Live in My Head” and closed the night with a dramatic cover of Marianne Faithfull's “Guilt,” into which Sley poured every ounce of her thespianic fervor. Overall, Bush Tetras surpassed the expectations one has for a first-wave post-punk group touring in the 2020s.

Afterward, a long line formed at the merch table, and there I had the good fortune to chat with Pat Place. Sadly, she related that her friend and former lead dynamo of Contortions, James Chance, was very ill. He last performed in Seattle five years ago.

Opening the show was Seattle power trio So Pitted, whom I didn't realize were still going. They released the brash and brutal Neo album on Sub Pop in 2016, and seemed to be poised for at least medium-sized things, but then shortly thereafter they faded from the scene. They acquitted themselves well, though, cranking out cantankerous hard rock with unpredictable dynamics.

Unfortunately, Nathan Rodriguez's guitar was barely audible; no matter where I moved in the club, it sounded like faint metallic scratching. However, drummer/vocalist Liam Downey and guitarist Jeannine Koewler came through loud and nuclear, with the latter's instrument running through a bass amp to create a feral, low-frequency growl. Despite the technical problems, it was good to have So Pitted's explosive rock back.