Kathleen Hanna, Then and Now

The Northwest Punk Icon on Why It's Important to Argue 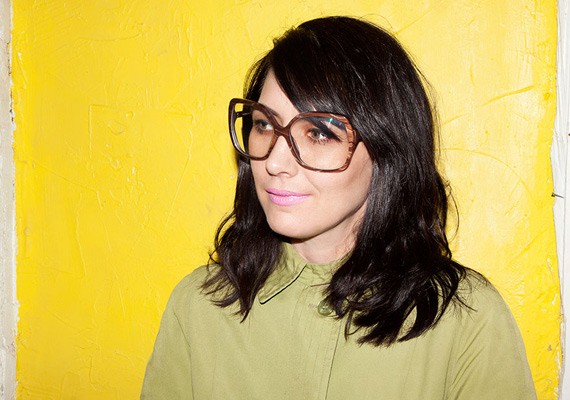 Faced with the opportunity to interview Kathleen Hanna, my main goal was not to hyperventilate. Between her involvement in the riot grrrl movement, her music projects (Bikini Kill, Le Tigre, the Julie Ruin), her importance to Northwest punk culture for the past 20 years, and the reality of a limited word count, there seemed to be an impossible amount of ground to cover. So I started by asking about the lecture she's presenting here next week, and edited out the many times I said "Yeah, totally!" and/or laughed way too hard.

"Riot Grrrl Then and Now" seems like it covers a lot of ground. What can we expect?

It's weird that I picked that title because I'm going to talk a lot about myself [laughs]. I am not riot grrrl, and riot grrrl is not me; I think I'm more going to talk about my overall career.

It's nice, I think, when you're young, and maybe you're going through some of the same stuff that I went through, to hear someone say, "Oh, this isn't just something you're going through, this is something a lot of activists encounter—it's just part of the gig." Or, for musicians who stick their necks out and say, "I actually care about stuff"—you're going to face harder criticism and get asked more questions just about politics, never about your music. If you're a woman, it's constantly going to be about your hair or your clothes or do you look older? Have you had a face-lift? [Laughs] Yeah. I'm in the face-lift chair right now. I'm getting my face lifted just for the lecture! No, I would be so scared to get a face-lift. I would look so weird. I have learned that the high, tight ponytail is kind of the natural face-lift [laughs]. I wasn't trying to go for that look, but every time I put my hair up really tight, it's sort of that same thing they used to use in the '50s, that tape behind the ears. Yeah, everybody's always like, "You look a lot better with your hair up," and I'm like, "That's so messed up!" Maybe I'll wear my hair down and just look like myself.

Excellent choice. You've said many times that you hoped riot grrrl could be something for younger activists to build upon, rather than imitate. Do you think that's happening? What are you excited to see from future generations?

In the very first manifesto I wrote about riot grrrl, I encouraged other people to write their own manifestos, because, you know, I can't speak for everybody. It was really contradictory, because I also started every single phrase with "Because We" as if I was speaking for everyone. I think a lot less of that in the future would be good, a lot less universalizing one person's experience or a few people's experiences... I really always just felt like riot grrrl was a tiny little branch of feminism that was trying to expand punk rock to include feminist ideas. When I say "build upon," I mean we're a part of the feminist continuum... In the '90s, there was a backlash against feminism. For me, it just made more sense to go on the road and not just tell people that feminism still exists, but be the fact that feminism still exists. And in showing that, hopefully inspire other women to do the things that they wanted to do.

I don't want to see a riot grrrl part two. It's like, there's a Furious 7 now. We don't need it [laughs]. But I think it's important that each generation can learn from each other's successes and failures. And oftentimes the failures—while they're painful, and awful, and they hurt people—can lead to really great things because they piss people off and make it so people can say, "Fuck you, I'm going to make something 10 times better." I have to credit a lot of the things in my career to the fact that I met with a lot of resistance, and told myself, "That just means I'm on the right path."

Where do you think the current discussion about feminism, at least in music, fits on that continuum? Like Beyoncé's "FEMINIST" sign. Did you ever foresee something like that during the backlash you mentioned?

I definitely think Beyoncé's performance at the VMAs being so all over the place was interesting and important. And I'm happy to see people being upset about things like the Robin Thicke song a year ago, and just talking about feminism in pop culture again. But I kind of knew it was coming—it's usually a 20- or 25-year cycle. I think a lot of it has to do with high-school kids having a nostalgia for when they were first born—what they missed. I'll always have a thing about the '60s because I was born in 1968, so the '60s are endlessly fascinating to me because it was the era when my parents were cool. Or kind of cool. So I think kids now are having a nostalgia for the late '90s and that's bringing back a lot of stuff. Also, a lot of people who were involved in punk-rock feminist stuff in the '90s are now feeling at a safe enough distance from it to talk about it and to talk about the damage that a lot of us went though. Because sometimes doing group activism can be really damaging when you're young and insecure. Even though people might think, "Oh, you were this tough, strong-ass feminist," it's like, I was still in my early 20s and totally insecure, just like everybody else. And I had a hard time, especially speaking up to other women when I disagreed with them. That's a big message I always try to have—it's really important that we argue.

Speaking of arguing, the internet. What's your impression of the culture of online harassment? It seems related to issues raised during riot grrrl, but it also seems really new.

That's definitely a big topic right now. And I know last year Lauren Mayberry of Chvrches wrote an article about being really frustrated, saying that she wants to be able to keep in touch with her fans on the internet, but when people are sexualizing her and writing about her body and threatening to rape her, she was like, how can I stay in touch with people when I have to wade through all of this crap?

She brought up a point with me in a group interview we did. I'm like, "Just don't read it." Just don't scroll down into the comments. And if you happen to accidentally see something that says you're a stupid asshole, it has no merit to it. It's not an actual critique that's smart. I've read plenty of critiques about things that I've been involved in that have been totally smart and that I thought were totally right on. And that's really different than someone making jokes about your body and making jokes about raping you. That's the problem—you want to read the valid critiques, but you don't want to deal with this abusiveness. So I was like, "Just don't read the comments," and her point was "Well, why should we have to put up with this?" It's almost like street harassment. In a way, I'm being a jerk because I'm saying just ignore it. But it's like no, we have to fight against this. We have to make this a part of a public conversation. So I actually agree with her more than me [laughs.]

by Bree McKenna and Emily Nokes