Address such topics as:


It wouldn't have been terribly difficult for Chastity Belt to capitalize on the success of their first album, No Regerts, by making another one just like it. The band, which began as a lighthearted pastime for four college friends looking for a way to entertain themselves, had a sharp rise to local prominence after moving to Seattle three years ago. Their songs are catchy, and the shows are lively and fun, but what was really captivating initially was the withering humor encoded in every aspect of their presentation. The band name, the promo photos, the song titles ("Pussy Weed Beer"), the graphic sensibility—everything about Chastity Belt offered a defiantly ironic, confidently diffident spin on Northwest indie punk that made the music seem like just another plank in the platform.

Then the second record arrived. The release of Time to Go Home (on the label Hardly Art) in March 2015 was a massive leap forward in the musical life of Chastity Belt.

It's a serious collection that builds on the promise of the more ambitious songs from the first album, and it launches the band into melodic, harmonic, and emotional terrain none of their previous work even hinted at.

"There we were," Julia Shapiro sings on the title track, "sitting in silence/Nothing worthwhile to say/Wanting something that would cut deep." It's a heavy, self-consciously existential scene set by gloomy, chorused guitars and a dour, slo-mo march. If early Chastity Belt were a party, this is the sound of the dawning awareness that all parties eventually look the same. 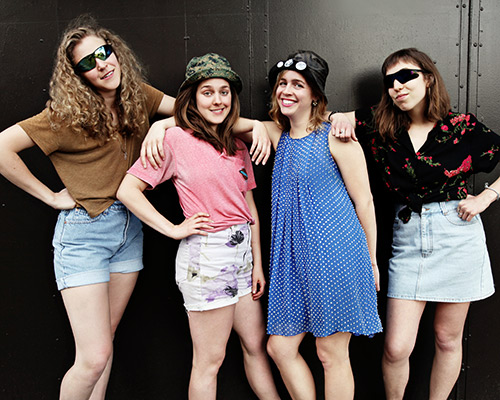 But then Shapiro drops a line that proves the band's newfound maturity hasn't come at the expense of their sense of humor: "We're gonna have a meaningful night."

A meaningful night. There's no special inflection on the word, no vocal eye roll or finger quotes. That's another mark of the increased sophistication in the songwriting, bolstered by the band's expanded dynamic capacity and instrumental fluidity. It takes real mastery for a party band to make music as good as this.

The best tunes of the year, from Bjork to Versing (and many more in between), as selected by the Stranger staff.

Nominee for a Stranger Genius Award in Music