It's the Cities, Stupid

The Editors of The Stranger 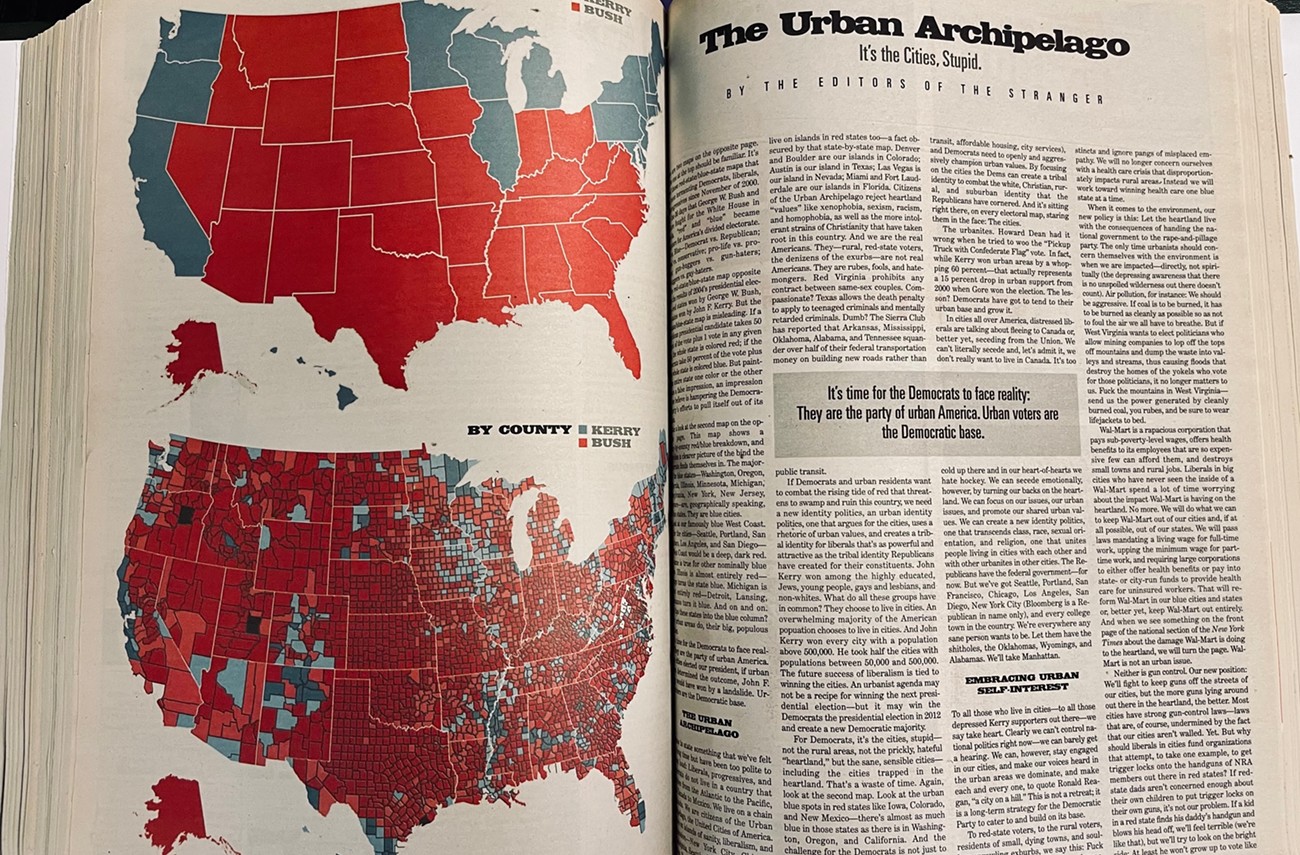 As originally printed. ASSOCIATED PRESS MAPS
Back to article

A) This kid is under 25 and has never read any of our founding documents because he attended public schools. This was probably followed up by a public university education.

B) He was a Journalism or English major. That is generally where the poorer students head instead of the sciences, business, or law because "math is too hard."
on October 4, 2008 at 2:30 PM Report this
3
As you might expect, just my opinion:

Exclude the principles and ideals you so deplore, but be careful with such broad strokes of divisiveness and resentment of people.

People's principles change. Watch them change in moderates as you alienate them. Watch them galvanize in alienated people as they amass into groups.

Or watch them change as people move into the city, like you say, and become "urbanites."

Don't tell a whole state to f-off. Or a group of states. You're winding the spring on a pendulum you hope to swing your way; you're not nourishing an ideological change for the better, with wholesome organic faggy-farm foods. The resentment of these "rubes" is one thing you're nourishing (though I heard you when you said you don't care). And the rubes aren't going to die, much like those resented by conservatives/whatever aren't going to die, as seems to be a hoped-for result of taking away their power.

So please, dude, please. Please promote this agenda, and enlist me, and my brother, and everybody, to promote it. But please don't emulate the behavior of the governance you resent so much, by writing off swaths of people so readily.

Write off their wayward ways, for sure. But do you feel me? Give 'em a chance to give up hating gays and stem cell research. Ditch the "with us or against us" and warfare lingo. And give a nod to the fact that "open-minded LIKE WE ARE" is actually fascism.

My grandma, whom you hate, recently converted to what you (with a bit too much self-reverence, in my opinion) call "reason." She lives in the country and has your urban vision. She farms and has a gun and supports sensible tax reform and stem cell research.

But she didn't convert because of you. Don't trash talk her, yo.
on January 14, 2009 at 12:24 PM Report this
4
This is great! It summarizes my feelings for the new era of politics.

I am forwarding it to everyone that I know.

Tam
on January 14, 2009 at 12:37 PM Report this
5
A bit harsher than I would prefer, but a good reflection of socio-political realities.
on January 14, 2009 at 12:44 PM Report this
6
Actually, a public education does include both reading and analysis (not rote memorization and blind acceptance of others' interpretations) of our country's founding documents. At least that's what I did during my public grade school years.

I hope peeps in the near future will practice avoiding these arguments where the opposing parties/subjects are falsely portrayed as no more diverse than urban/hooooorrrrrrible or public/private or left/right or whatever.

I know that everyone knows that there's always more than two sides to things, but sheesh, we sure haven't been behaving consistently with that knowledge in the last several years in the USA.

We need to play nicer with each other in this country, and give a little. Seriously, give gays a break, research some stem cells, let people who want to hunt and shoot own guns, quit fussing over public/private schools, and let's develop this country and eat delicious faggy organic country fried steaks in all our different ways.

Think that the idea of such a (albeit silly) list of imperatives can't be realized? You are not a progressive (and some would say you can fuck yourself).
on January 14, 2009 at 6:55 PM Report this
10
This article was written after the 2004 election. I don't think the point was to alienate, but to strike back at the majority in favor of hate-mongering, Earth rapists trying to alienate rational-thinking human beings. Perspective, people. The tone was totally appropriate given the circumstances.
on January 14, 2009 at 7:48 PM Report this
11
Yay name-calling! Yay to professed ownership of rationality! Yay to condescension!
on January 14, 2009 at 9:53 PM Report this
12
The tone would be appropriate for a bar conversation maybe. I live in a town of ~60,000 in Idaho, and I am not a conservative religeous republican 'rube'. This op-ed started out with an interesting observation, but the fervor and partisanship of the authors seem to parallel the ideology of the demographic the authors are ridiculing. Also, the rural areas of the mountainous western US are beautiful and it would be sad to avoid them based on political differences with the natives.
on January 14, 2009 at 11:23 PM Report this
13
Seems a bit hate-mongering doesn't it? But hey, I'm just a pagan-libertarian-cop raising horses and dogs out in rube-land. Hope you like eating rats and each other, if the rural stopped being rural that's what you're gonna have left...
on January 22, 2009 at 1:37 PM Report this
14
"It's the cities, stupid". Which of course is why most of the big blue areas on the map are in Maine, Vermont, Minnesota, northern New Mexico and southern Colorado, the rural California north coast, south Texas, along the Mississippi River, the Appalachian coal region, and a line cutting across the rural South.

15
I just popped back to give The Urban Archipelago another read. You guys should've won a Pulitzer for this. Loved it at the time, dazzled by it now. World class work. Salute!
Puty on August 8, 2014 at 4:12 PM Report this

17
Can it really have been 11.5 years ago that this was written? How is the fight going? Is the archipelago winning?

I guess the country did elect a black guy, legalize gay marriage and is on the path towards legalizing marijuana...
The Dopest on February 23, 2016 at 4:00 PM Report this
18
This article helped keep me from utter despair after the 2004 election. Dan Savage slightly backed away from it in a recent blog post, demeaning it as "we were angry." I don't know why he still isn't. I hope all the writers who contributed don't feel that way. This article is as relevant today as it was twelve years ago.

Certainly, we have had some victories. I worry that they won't last, however, as today's youngest urban left hasn't continued with, or progressed, the momentum, but instead, focuses all of its energy on "micro-aggressions," "cultural appropriation," "safe spaces," and (ignoring all evidence to the contrary) refusing to admit that, yep, some cultures simply suck. Eschewing reason, science, and rationality is no longer just a rural moron past-time. Only the topics are different.

Far too many on the left don't read anymore than conservatives do, don't know (or care about) history, have zero critical thinking or reading skills, and don't have the attention span or discipline or ability to analyze complex subject matter. They don't slow down and simply contemplate ... anything.

This article was written before social media had taken over our lives. Long, thoughtful, nuanced articles like this are rarely written, and when they are they're rarely read with any critical thinking anymore. If it was published today, the vast majority of its readers wouldn't finish it before rushing to comment. Most wouldn't finish it at all. Too long. Too much scrolling. Too distracted.

The authors' idealized description of a learned, thoughtful, rational urban left no longer exists, thanks to a broken educational system (which no one on the left cares to discuss in any depth because that would be uncomfortable to their sensibilities), the proliferation of video games and smart phones, and the glorification of S.T.E.M. over the Humanities.

All of that being said, I still love this article. I still live by its principles. I just include a lot more lefty urbanites with the rural morons among those whom I'm no longer concerned with helping.
jade on February 24, 2016 at 10:23 AM Report this