Here's the quote from Ted Haggard's interview with the LA Times that everyone is seizing on...

Q: So do you think of yourself as homosexual or bisexual? How do you identify yourself?

A: What my therapist says is that I am a heterosexual with issues, and I think that’s accurate.

Q: Have you been attracted to people of the same sex all your life?

A: Yes, I have. But not to the exclusion of women. I think women are beautiful and I’m attracted to women, and I have thoroughly enjoyed my relationship with my wife. And according to the national statistics, our relationship is more vibrant than average heterosexual monogamous couples. 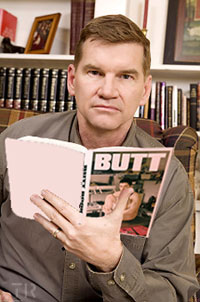 Attracted to men, sure, all his life. Not to the exclusion of women though—but he's not, you know, bisexual. Just another of those heterosexual men with "issues" that you'll find all over Craigslist looking for gay men without "standards." You would think that the LA Times reporter would confront Haggard on this: attracted to men and women = bisexual, it does not equal straight-with-an-asterisk. But whatever. I'm sure I speak for all Americans when I say I'm just happy to know that Mrs. Haggard is getting nailed more frequently and more vibrantly than the average married American woman—and she's getting it more monogamously these days too. I've been concerned about Mrs. Haggard's sexual needs not getting met. Now I don't need to worry anymore. Thanks, Ted.

Q: A lot of people in the gay community want you to identify as gay and serve as an inspiration to people about coming out of the closet, from their point of view. What do you make of that perspective?

Ted's answer—that he could serve as some sort of liaison between the gay and straight communities, seeing as he occupies a sort of a middle ground between gay and straight, because he's got with one foot in the straight world and one foot in the gay world, sort of like A FUCKING BISEXUAL—is fine. But I reject the premise of the question. There's been a lot of talk in the "gay community" about Haggard since Mike Jones dragged his lying, slimy, hypocritical ass out of the closet. And while I've heard gay people say that Ted ought to come out as gay—few us believe the attracted-to-women thing—I've never hard anyone say that Ted would serve as an "inspiration" to others who are coming out. A lot of us think Haggard is a deeply disturbed gay man. Haggard is pitiful, not inspirational. His coming out would serve, at best, as a cautionary tale, a good example of how not to do it.

Comments 62
Tags: News Blogs
The Stranger depends on your continuing support to provide articles like this one. In return, we pledge our ongoing commitment to truthful, progressive journalism and serving our community. So if you’re able, please consider a small recurring contribution. Thank you—you are appreciated!
CONTRIBUTE NOW